The Most Anticipated Arrival in My Life 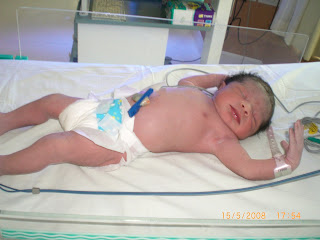 This was the momentous occassion, 15th of May, 2008, for which I had waited with bated breath. Something which started as a belief against all belief, faith against

faith... as if tempestous force of love and longing were to be able to conquer all the calculatios of astronomy..slowly started as a feeble heart beat which could be heard only through most sensitive of the equipment, metamorphosed into a live kicking member of the family (especially after a glass of sweet juice). The initial apprehension which all the time surrounded our being, was replaced with a feeling of all the time accepting and assimilating a new, most loved person of the family (which her mother called "her secret friend" who would kick in her belly out of the sheer joy of totally being protected in the being of her mother while she sat through drab official meetings). Sonu was checked in at 10.30 PM night to Max Saket Hospital. I stayed back as attendent, dreaming about the toothless wonder. The night went by in delirium, and with the dawn of the day, Sonu was checked in to the operation theater as I waited for the final moment, the moment which I felt as a moment of vindication for all that our relation had stood for. As the hospital attendents tried to push me away from the second floor OT asking me to wait on the third floor like a decent father, but I impatient as ever, almost fought with them on one pretext or other. I wanted to meet the Doctor before she went in to operate, moreso because I wanted to show her the paper as Doctor Bithika, friendly and reassuring as always, but coming out as forgetting, may be my baby was one of many she helped deliver, but for me she was only one. Also I was worried about Sonu, who was in there trying to struggle for my redemption, shown her the papers, despite her insistance that she remembered all history, and stayed back waiting for the arrival. Things at office were not going well, anticipating a new job offer, worrisome readings of horoscopes, work pending at the office, no, but at that moment, nothing mattered, as I leaned against the wall, unslept through the night and still not feeling even slightest bit of sleep, as I run the planned sequence of events, like checking the baby's fingers and all. And then I saw the baby towed to the Nursery at 8.30 AM (arrival 8.18 AM, 16.06.2008), as I rushed to see the baby. Asked the Nursery attendents about the baby, see told about the girl child, and it was strange sense of protectiveness that swept across, through all anticipation of a boy, a love, sprung from somewhere deep in my heart. With heart beating hard, I entered, with so much worry as I looked around the nursery small babies lying around, as all the fortune readers words reaching me through various people, read into my mind, I looked for the smallest baby, and then the nurse shown me to the most active baby in the nursery, as if exercising her limbs for a great fight called life or exressing happiness for being out in the world to experience my love first hand, mesmerised I looked, all for five minutes, and then as an afterthought, ran out to the OT, met the doctor asked how was the bigger angel was, and was reassured of all being well. She was brought in the world at 8.18 AM and brought into the family for introduction at 11AM. Beating all my worries, she was welcomed, not in a disjointed family, but a complete one, with both ends of a moon filling up a lovely night. At eleven twenty four, Sonu stretched her arm and touched her little self and she let out a wail of acknowledgement. At eight she was cuddled in my arms, and I have already started feelings the pangs of the thought of her leaving me for a life of her own, twenty two years down the line. Nonu, papa welcomes you into this world...or Baba as you are to call me in time to come as you slowly grow into the best friend which I almost thought I would never have.