Thoughts on a Lazy Saturday


It is another Saturday, little laid back one, after a very long time. Got up at moderately early hours for a non-office day, at around  eight in the morning and the good thing is once my little daughter was up around half an hour after that, she for once agreed to take a quick shower together with me. So all sunny and washed up, two of us were ready well by around half past ten and are at the neighbourhood Cafe Coffee Day outlet, where she is now almost as regular as I was at the Indian Coffee House in Raipur during my engineering graduation. While she today expressed her grand desire to deviate from her regular chocolate brownie to a piece of black forest, the same was left out almost entirely uneaten, as I unknown to the mind of the child asked for a glass of water. The little lady, almost immediately saw the straw there and putting two and two together, decided, trying to drink water by the straw was much better fun idea than eating the black forest. When she started playing and some water, as was anticipated spills over to the table, and eyebrows start to frown; the moment I try to threaten her into subservience saying that with such behaviour, this would well be her last visit with me to the place. She endearingly looks at me, blinks her eyes and says, Nonu and Baba are friends (Nonu- baba docht hain!) and then waits, with “how could you” expressions till I reiterate the friendship. Once that fact is established, my duty to bear with any obnoxious behaviour of hers is a given. So once safe and secure in the knowledge of a a friendship which does not search for a rational, like being good to look at one another, being smart or sweet or nice has no bearing on the friendship, she has the spring back in her walk as she pushes me to the outside of CCD. She runs around on the pebbled sidewalk which works as an extended outdoor cafe for the establishment. With the sun shining in its glory, and my baby shining in its own as Delhi winter is on its last leg, this Saturday can beat any given Sunday. 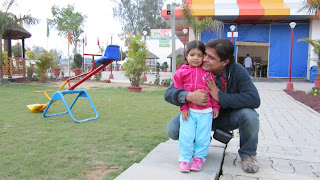 Wantonly my thoughts wander to the young today, who look at their parents as one the most original enemies that life has bestowed them with, right from the start of it. This in spite of the fact that it is the parents who given them the life and later on in life, right to live. I am not the one to suggest that one ought to remain indebted for their entire existence for doing something which nature has ordained them to do and do love the Khalil Gibran thoughts of quivers and arrows to the new and preceding generation. What leaves me totally confounded is the total incapacity of gratitude from kids of the day, even when they have arm-twisted their parents into doing things which went well beyond what one would call as nature-ordained duty. This total insensitivity and incapacity to identify, recognize, appreciate the good which people who did for us, in spite of our not having given them any good reason for doing, and how that insensitivity extends further is a truly surprising fact to me. The way they act is as if they have rather obliged people by giving them an opportunity to serve them. And, there is no remorse, when they find that they have not being truly honest to people who took care of them even when they had not been given any right reason to do so. Apologies have gone out of fashion, reminds of a recently read article in the OPEN magazine called “The Death of the Lady” (http://openthemagazine.com/article/living/death-of-the-lady)  by Olivier Lafont and to be fair “of Gentleman”, extremely well-written and so true.