Being right or Being Human

July 22, 2011
There are certain accidental discoveries which constitute the beauty of life. Sometime, wandering aimlessly you land in a place you never wanted to be and encounter the most wonderful person with whom you either eventually spend your entire life or well, maybe accidentally you loose that person and end up cherishing the brief encounter for the whole of life. Well, this piece is not about that incomprehensible life force called love, at least not in that sense of word. It sure does refers to love in some form, but that that is what the title of the blog promises any which way. The accidental discovery which I am referring to is not about some exquisite individual, but rather about a book by an author whose name I had not known till the time I picked the book "Notes to Myself" from the lanes across the railway station in Indore during my masters.
It was like a kid who goes out playing with marbles only to find a priceless rubies among the marbles he collects from near the sea shore, accidentally. The book written by Hugh Prather contained several lovely quotes, and some of them keep on coming back to me as an eternal companion in the loneliest of the nights when I retire to the reverie with a bruised soul, amused and pained at the ways of the world.
There are some high-sounding How to books which I came across during growing up (who does not, if you can and love to read) in which authors put themselves on a pedestal, intermittently drop names of their infatuated fans and tell us how to live our lives. In the long run, the sheen is robbed off by merciless time and the hollowness of their glorified wisdom stands exposed. Now, this book sustained the unrepentent and uncaring waves of time for one reason- it was iconoclastic to a great extent. It was amazing to read someone proudly proclaim "Do you think I contradict myself? Yes, I do, I am always expanding," what can be a better way to free oneself from being hung up on a wrong position taken on account of lack of information and transforming one to be open to change the positions in view of new realities and new learnings. 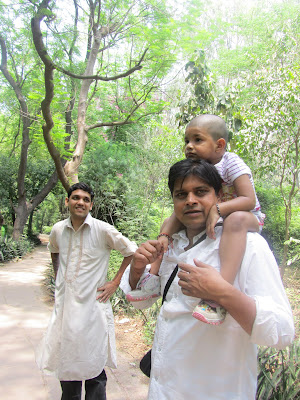 That was a pot full of jewel and the jewel which is of most relevance here is a quote which comes to my mind every now and then is "If I have a choice between being right and being human, I would rather slip and be latter." This is so wonderful and evolutionary and out of the world that it almost seem unreal. But once you let yourself slip into the wonderful world of understanding that this quote renders you, you realise the power of these words, which is almost like a splash of icy cold water which one throws over one's face in the early morning in an effort the break out of the rythem of sleep and it is as refreshing and awakening.
Yesterday, we were out to watch a movie and I with my wife sat lost in the beautiful cinematography and powerful oratory of the movie, my three year old went into her common ritual in the movie theater as she went walking around the seats in the theater. In between someone opened the door and she walked out of the auditorium. As all doors in the multiplex look simillar, she walked into the one next to ours. After a while, we parents woke up from the trance of the movie and found that the lovely creature, who looked in small hairs was no longer walking around and craning my neck, I could find her nowhere around. As I went out looking for my little child, asking all the attendents if they have seen a sweet little child, my heart sank. I felt in a moment like a rudderless boat, floating in the dark of the night in the middle of the vast expanse of an ocean, quiet as death, with no polar star in the sky. Right before that I was arguing with my wife as to who should go looking around in the theater. It was her turn, I was very certain. I was being just, no doubt, I had gone looking for her last two times. But as the sinking feeling hit my stomach, when I could no longer find her, in a span of ten minutes, the thought came to me, "If the choice is between right and being Human...". I should have decided to be human in stead of being just, if I loose that shiny smile which landed into my life just three years back, would I ever be able to forgive myself for being right. No, it was as clear as a clear sky in the evening after a downpour during the day in a Monsoon. It was the moment which defines the feeling for which probably Gurcharan Das wrote "The Difficulty of Being Good". No, I did not want to be just, equitable and right, I wanted to have that soft, little creature back in to my arms, and I wanted to run my nose into those short, fresh set of hairs on that head. I missed her so sorely and I felt so useless in those moments. Finally, I saw her on the gate of another auditorium on the other side and my heart broke when people who gathered around told me that she was walking around there calling her baba. I picked her and when I took her close to my chest asking her why she went out, she said, " I thought, baba that you had gone home." How could I have made her feel that such a thought was even plausible? Is being righteous big enough a reason to expose my little one to one of her early insecurities that she can even think that her baba could have gone home leaving her there, alone and unattended. I have been left out for a while by my parents and I know, that it has never been the same. I am so sorry to my lovely one right now busy watching Tom and Jerry beside me, with all the naughtiness of the world on her face, and I can say with all certainty..I would rather slip and be human."