November 17, 2011
The trip was marred by usual dilly-dallying, and frustration arising out of it and sense of pathos running under, which has been the leitmotif of my life. So the packing done last moment, in the night after watching the unbearable movie "Rock star" in spite of some excellent music. The flight was at 3:30 AM at the unearthly hour. A smooth flight with British Airways with Parathas on the first leg, and none of the nonsense regarding the luggage with which people scared me.
Reached the land of the Queen, in the morning, had some nightmarish expectation of Heathrow, but unlikely it was pretty big, and nice and systematic. Breakfast options were as limited as they are in the US, so it was Milk and Cake for me. Left UK by around 10:45, with a flight which was on time.Reached Las Angeles some time which seemed like evening, and then with American Airlines to Las Vegas in the evening. Immigration done there, with a quick check out and check in with baggage drop in the same terminal. In between, met up with colleagues travelling in from India through Emirates at LA, and on landing in LV took cab with them to the hotel. The city has amazing skylines, hotels here gives a different definition to the term huge. Awe-inspiring large buildings, which they are, all the time carry a festive look. Right at the beginning from Mandalay Bay, left on the side of the road from the Airport.
Landed at the reception of "The Venetian" designed with great paintings on the roof top, built around Italian fashion. The hotel was all built up to remind on of Venice, reflecting the name, including the Great Canal Shops around a Canal complete with Gondola ride with the hotel. The most amazing thing about the market was the roof top which was designed like a sky at the dawn. Entire market is lighted with such delicately designed light system, that one almost feels as if sunlight were falling on the buildings. It was surprising that even people who had visited the hotel earlier had not seen that. This was one of the great attraction, in addition to the other staple attractions of Vegas like the MGM lions and Sirens of Treasure Island.
Jet lag and tiredness which carried through the day, went to sleep in anticipation of an early wake up the following day for the trip to the Grand Canyon.
Booked on Las Vegas Grand Canyon tour, with Helicopter Boat and Bus, we were to be picked up from the Hotel at 6 AM. The pick up was around ten minutes late, and the tour was operated with Casino Tours and Travels with an EX US Air force tour guide on board. The tour began with a breakfast,  thankfully, vegetarian one. It was a drive of close to three hours with in which the landscape changed at least three times, so did the weather. The couple interestingly in front of us was in the age bracket of around fifty five, recently married on 11.11.2011 and much in love. Mostly it was couples on the trip. Now coming back to the landscape, it began with the one lined up with plain sights of outskirts of Las Vegas, a testimonial to great human spirit of enterprise in the middle of the desert, giving way to the Joshua trees. When someone asked as to why the name, the reply from the guide was that it was because the tree resembled a man with hands raised skywards, can not vouch for the authenticity of the claim, though.
It was a long journey with intermittent commentary by the tour guide on the path as well as other items of interest ranging from US economy, which definitely looks very seriously ailing from inside than one would assume from outside as realty prices have nosedived to half of the pre-recession value. Finally we landed at the base from where the Grand Canyon trip was to finally commence. What we saw next and experienced next was truly beyond the expectation, and it was not about the first time Helicopter trip, which was incidental, it the awe-inspiring grandeur of nature, against which mightiest of men must bow down. The happiness that nature renders is beyond compare. 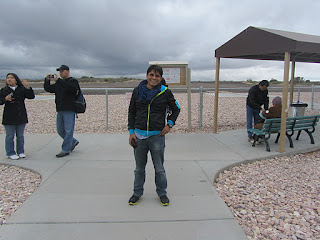 ﻿ The temperature was low, close to zero, but the Nike jacket did its best to stand against it.
the weather notwithstanding, both me and my friend, Tapan were all charged up to go on the ride.
The Birds arrived and we took off. The thrill of Helicopter could not stand in the face of tsunamic thrill of watching the enormity of the Grand Canyon with the Colorado river flowing through it, like a nughty, bubbly dauthter in the watchful, loving and yet, rough embrace of a father.

The awesome visit to the Grand Canyon was followed by a late night walk through The Venetian's in-house Grand Canal Market, complete with a man made, always morn ceiling, with light placed so cleverely as to create a play of light with illusions of day even in the dark of the night, even an in hotel canal with gandola ride, though must be crazy attention for a single traveller. fFollowing days were like those floating before tired eyes as if in a trance with early wake ups on account of the sales conference, which if not anything else promptly displayed a confident CEO quite capable of speaking her mind, a first in the recent years of HP. One thing very interesting in the whole event was putting in a stand up comedian as the Emcee, which underlined the capacity of the organization to laugh on itself, which is a great thing to have in the times of stress. Evenings went in a quick rush to the next door Fashion Ways mall, which had Macy's as a last resort for all the tired souls after day long sessions on the great thing Cloud as technology is, for buying obligatory gifts for people back home, helpless souls worried with having to go back home empty handed and the eve tempting discounts on aspirational brands like Calvin Klein, Puma and all. Did buy a pair of sneakers and that constituted one of the best buys made in the US. Another best buy could have been Apple iPhone 4GS, which I did not buy merely on account of my eternal dilemmas, on which I had previously have lost a great deal of money on numerous occassion. The buy could have brought a benefit of ten thousand over its Indian price of the equipment, but did not buy it, and same dilemma saw me and my collegue, buy a two hour pass to travel on the bus for five dollars in stead of seven dollar one for twenty four hours, as we travelled from The Venetian to the south end of the strip, hopping on and off as we went to Frys Electronic store resembling an aircraft hanger, loosing track of time and eventually buying another set of pass thus loosing money, and then missing time again as we got down at hotel Bellagio to watch the amazing [and free] musical fountain, truely mesmerizing experience. Lesson learnt, always buy a twmety four hour pass. Dinner for vegeterians was more of a ritual with not much option but milk at Starbucks and some rice at Panda Express. There is also Mamba something for Indian food but could not make it. For return opted for the shuttle in stead of cabs, with a lesser fare even with the mandatory tip of eighteen percent. Before Vegas could even sink in, I was on American Airlines to catch BA, back to India, thinking of buying some apple from the Heathrow terminal in the UK, to make up for my indecisiveness in Frys. The prices there in the UK were like cold shower much higher than what they had in US, even for Chivas Regal, which was coming for fifty five USD for two in Chicago O`Hare airport, again thirty five for one in IGI Airport. Back home, struggle up for meeting the deadlines of BSNL GSM RFP staring back at me with the glean of a carnivore in the eyes on first day in the office.