You stand between You and Yourself

Every morning begins with a taste of failure, a salty taste like the one which tuches the tongue of a fallen rider, who falls with his head in the mud. Life desperately tries to pull ne out of the quagmire of despair, with those lovely tiny arms pulling me out into the sunday sun, but the sense of loss shamelessly persists. It just tones down and slips into the underlayers of thoughts like a lost river and as evening brings back the helplessness of fading health to fore, with a mild headache, it returns with a scorn-filled glee. By the time the night descends, it gains such enormous proportion of large shadowy presence that it is as scary as a night with impending storm and no light around to offer even a false sense of security.
Wife looks through the lies, ignores the medical; she is a woman of strong optimism. She believes I can arrest and reverse the slip on the quicksand if really would decide it. She says it with acerbic desperation, do not know out of love or out of distaste of a lost trust. Evening returns with a strong sense of failure as I try hiding behind self congratulatory lies of putting others before self as the reason of not being able to contain and respond to the questions which life presents with same verbosity and liquid prose with which I philosophise. Truth does not hide behind colorful ornaments of eloquance and it has a tendency of coming back at you, cutting you in size every time it comes back.
I get angry at my child who acts funny at times, refuses to stand calmly and keep dancing. I get angry and annoyed and I question her why she does that and with each question my decible rises. I do know in heart of my heart that all she wants is my attention, which I am not able to give merely because of limited number of waking hours I am left with, merely because my waking hours are pegged with my working hours. When office is at nine, I am up at 8:30, the waking hour shift by every minute of shift to working hour. Thus i can not exercise as I plan everyday, as age passes by and I reach a time where impending death can not seem distant fiction, rather becomes a fact too close for comfort. No time for my intellectual nourishment as I try to take time to read from the stock which should belong to my wife and daughter, overdrawing from their account. As I write this it dawns, it is only I who stand between what I should be and can be. 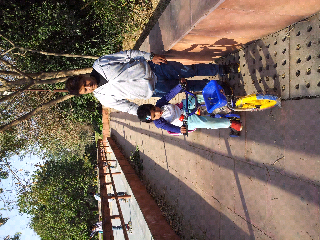