The Direction of Life 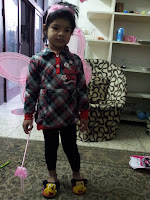 As the Academic session for Nonu's play school comes to close, she gets engaged with her classmates in the preparation of the Annual Fest coming up on 18th of March, 2012. This graduation, as they call it, pompous as it may be for a three year old, does not mean much to her. She only understand this as an upcoming function of fun and frolic. This is probably her first time to loose something she knows as her own, as she gets to transition from her old school to the new big or bada school. She is excited though not quite satisfied with what she is going to be, as she came back slightly disappointed from her school the next day after she went with her props to the school. They were making her Fairy, while her mind was set on being a butterfly. It took me considerable effort to help her explain her how fairy is better than butterfly, ( the fact that it is much better than the Pinkie Pig which she played in the earlier event is another story).
The interesting part of this whole discussion was the innocent ignorance of a child mind which has its preferences totally internalized. There is nothing outside the self which decides the preference. It is a curious thing to know how slowly society creeps in. Her idea of being a butterfly is not because that makes her better than her classmates but simply because the idea is inherently so beautiful, just as she earlier found the pinkie pig with red nose beautiful.
Somewhere down the line, society will step in as a friend, eventually taking control of whole of the psyche, deciding what is best for the individual, and the individual subjugating his own wishes, gives in , and the life goes chasing the goals which society tells us to chase. We are the dogs which runs to catch the ball thrown by the society. A parent's job is not merely to protect the child from the obvious dangers of life, but to protect from the corruption of the young and open mind by the influence of the society. Who decides whether studying Engineering is better than Arts, and Medical better than Commerce. We complain that the society has not livelihood options in streams other than the typical middle class Indian destination of Engineering and Medical, and we start early in the child's life trading the dreams for convention, but choosing "right" kind of school which will mass produce a successful human being. But then is it not where we get it all wrong, letting our own mediocrity stand in way of innocent excellence which every child is born with. Every child carries with him or her a promise which his or her being has made to nature, a bond, a commitment to be the best that is possible for her to be. We, on the basis of borrowed wisdom from the dead statistics decide that there is no future in Humanities, but then ask Vikram Seth, ask Dickens, Oscar Wilde, were they not successful in humanities. Yes they are far and few, but then could it not be because, those far and few could understand and commit to the promise their being had made to the nature, and stay committed to the effort required to realize that promise. It is excellence that counts, and it simply stems from the love of the work that you do. If only we could have the courage to make our living out of it. It takes courage to muster the courage for your child, the courage which abandoned us in our own time of need. It takes courage when every next parent questions your parenting, every eye looks at you in an accusatory tone of voice and you have to stay steadfast to keep re-enforcing it to your child that is it Love of occupation, which leads to extraordinary efforts being put in the same by the individual and it is extraordinary effort which leads to eventual excellence. That excellence itself will ensure the sustenance even to a degree of success on the scale which your next door parent will approve of. I do understand Engineering, being an engineer myself, understand business, being into it little bit of writing, can understand some bit of it. But then, I have never danced, have never learnt how to swim, the patience and courage will be needed when my child comes to me someday and tells me that she wants to be a swimmer or join a ballet. I want to have a degree of level headedness to treat her desire to excell in her chosen area with the same love and affection with which I would support her if she were to pursue the vocation which I consider less risky based on my own life experience. It is important that she does not have to wait till it is too close to finally hear the faint calling which keeps on echoing in her tiny heart. I hope she will hear it, realize it, embrace it with a long life at hand to work on it and eventually cherish the fruits of that act of courage.It is important for us as parents to learn from our child that in the scheme of things which we call life, being a Pinkie Pig is as important as being a Fairy, as long as you can pour your heart into it.