A slow, lethargic start of the day, with multiple ideas getting postponed, beginning with the plan to double up weekly movie with "The Moneyball" being the first to go out of the window, followed by trip to the park, turned down by daughter, this morning feeling more inclined towards painting or colouring to be more accurate, a haircut trip and a trip to the coffee shop being other two propositions turned down by my little lady.
I settle down with Maugham's "The Summing Up" on the kindle, marvelling at her efforts and seriousness which can be compared to the sincerity with which Sixteenth Chapel was painted,  though to a somewhat better results, but don't all a father to judge his daughter's work. A misdirected brush stroke lands on her cheek, giving her cheek a deeper hue of pink. A headache keeps lurking from behind the wall like a naughty school boy, hiding away every time adult eyes looks its way. This play had been continuing since yesterday, the time I came back from the jog. I suppose the biggest spanner in all your life plan is the sense of being watched by people, some and all of them. This has been biggest block to my desperate fitness effort. By the time I am back from office , the neighbourhood park is closed. Bereft of the relative privacy of running in the densely forested park, I skip running, as every lost day brings me closer to the next trip to the doctor. I know, from my experience with what is termed writer's block, this awkwardness melts with the first word, similarly in running as well it will fade out the moment you step out on the street. that first step, that first word is the defining moment of your health. It is not the direct physical relevance which I ponder on, it is much larger, much beyond that, it is about sense of control and accountability of your own life. Nonu keeps talking to her imaginary classmates, Sara and Cyrus, some thing she does not do when she is actually in the class.
A saddening figure she cuts when in school, with her head down, rarely speaking to anyone. She doesn't seem to hate the school, but somehow seems to face same discomfort with people which I always had and struggled with all my life. I have set forth very poor example for her, and I do not know well what can be done to make things better, I guys stepping out in the street and start running would be a good start for three reasons, she might get the worthy lesson of not giving damn to the damned masses, two, can bring more continuity and sense of control to my being-parks and gyms have closing time, not roads, and third, even if this does not prompts her to step out to gain more friend, she will at least one with her for a longer Time in life, one who gets celebrated in an advert as 'kabhi superman, kabhi..' 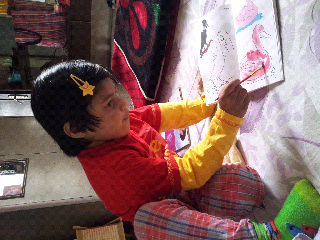