August 04, 2012
Sometimes, the desperate, never-ending balancing act which against all hopes, never subsides. It rather rather moves in a continuum between one crisis to another, without a moment to pause,  becomes too exasperating.
Amidst all this nonsense which envelopes any semblance of order beyond recognition, Nonu is now learning to live without the maid cum baby-sitter.Her Baby-sitter, an expectant mother, left last month, after working with us for a decade or so.
Nonu has taken it well, with almost sagacious indifference, to the ephemeral nature of most things in life. I would have preferred this to never have happened to her, to keep her cocooned from the arduous awareness of the sense of evanescent nature of happiness.
If only life could be a never ending happy dream, so quickly, as one grows, it turns into a tedious and painful journey, with rare shade of smiles, so rare that it can not be considered to be anything but sporadic aberration.
The best substitute to a trusted maid, to my mind was an institutional day-care. Having been raised by at-home mother myself, coming back home to the odours of freshly cooked food, makes me feel guilty to the extent of criminal, the thought of a small child coming to a deserted home, waiting for parents to come back like daily soap on the television every eveining, is truly disheartening.
To my mind, any proposition other than this would be less intimdating than this. In a Day care, at least she could have friends of her own age to play with. I pleaded for her to go to a day-care in stead of putting her to the custody of a new maid. But as is the case in most domestic matters, was over ruled: that we do not have a new maid yet is another story, but case is settled in favour of a maid against an institution.

What is saddening is the child in question had no say on it, she can not decide whether she would want to be governed at home or at a day-care centre, and if at home, had no choice over her new day companion. It is at such moments that the fallacy and hollowness of dual income families as a beacon of new and liberated world hits one. When it is not to meet any essentiality, but only to fulfil one's sense of independence and achievement, I am still trying to grapple with the elusive search of any logic to it. I write, but not too well, to quote Maugham, not as well as I want to, but as well as I can ( his was out of modesty, mine is admission). If I could write well enough for writing to pass of as a serious occupation, I could have thought of being stay at home Dad, alas, that competence and discipline to qualify still eludes me.
Writing is a very serious profession, and takes great deal of effort. Just knowing how to write does not make one a writer, knowing what to write does. Latter takes a lot of effort and practice. In the initial phases, one writes with spurts of passion and believes it to be a good enough a piece to attract interest of readers. Only later sobriety descends and the writer encounters the cold, cruel fact  that there is nothing like random brilliance in writing and nothing like an accidental literary genius.
I find trouble figuring out why some brilliant authors claim thus, is it utter sense of humlity and modesty, or a wily attempt to mislead those who might be intending to join the art, or merely to stress on their greatness to be a divine blessing which they seem to have been borne with.It is rare greatness of someone like Maugham, who candidly confesses that as  a diamond which needs to be polished with effort and affection to shine, with patience and concentration. I have not been able to inculcate such sense of discipline in my writing to be able to sneak in a sense of confident style of prose. She is merely four years and it has been no more than few months since our Sunday ritual was broken, but this outing already smacks of nostalgia as I look at the four year old across the table, singing to herself in her lips.
A call comes from home, or what is left of it, and heart sinks for unknown reasons. As age passes by the swagger of false sense of being in control fades away. I want to be happy, attain delirium, was I ever happy, past seems so far that it seems impossible to have ever existed, the future seems so enveloped in the mist of chances that it seems improbable. A solitude descends on the dusk as the day draws to a wistful close. I walk back to home with her tiny palm clinging on to my fingers, with a deep sense of regret at the lack of discipline, which I feel is the prime reason which put boundaries to my being.
But for discipline, many men would become many things, left only on talent, great many promises ended with broken hearts and spirits. Discipline can not be mistaken with order which is generally evident in the face of exigencies of life, discipline is the pattern which one follows even when does not need to, like getting up at six on a sunday. 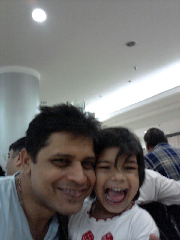