Another Diwali Goes By..

November 14, 2012
Another Diwali passes by. Having celebrated it in Delhi, in the memory of propriety which has long since lost relevance. Known to all, Diwali is celebrated to mark the return of the great, upright king of Awadh, after his fourteen years in the woods. I am not sure in today's world with life expectancy of sixty years or so, this story serves  more to persuade people to pursue the path of high morality, or deter them from it, well, fourteen years in the prime of your life in the woods, not much to show for the idealism. I do not think people celebrating your correctness centuries later will ever make up for the lost years. 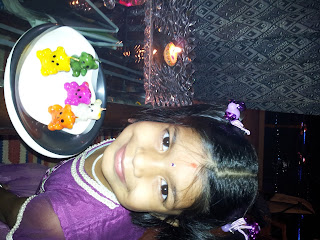 ,.
That said, these mythological stories, serves as a moral peg on which one can measure oneself. They also consigns a sense of hope in otherwise hopeless world, just as crucification of Jesus in early thirties (or is it late twenties, not a lot of difference anyways) does. If it were not for these lofty ideals held together by mesmerising tales, the world would fast collapse into an no-holds-barred, reckless society of predators. The universal principles of governance or Ram Rajya, an utopia world where justice prevails, kept life going even in the absence of any written panel code of laws and that is its significance.
There is another important significance to festivals like that. That is the role they play in keeping the communities and families together. Given the individual weakness and fallibility of human race, and the extraordinarily long time that humans take to come to a stage of being able to run their lives without aid, human survival leans heavy on the human capacity to build communities and families, which takes us through a very long and tedious gestation cycle.
Unknown to us, we need it even when we are supposedly independent. The noise around reducing crackers and noise is all arising out of this individualism, as our happiness, celebrations and festivities are now confined to our petty unipolar homes. We are children of collapsed communities and failed families, whose only hope lies in getting together on these occasions, drink from the nectar of life which we call love and come back replenished.
It is a fallacy to try to create the magic of a family full of brothers, sisters, grandparents in today's nuclear homes and to believe it can compensate.
Young have taught themselves to live untroubled by the responsibilities of the past, and old are living in their empty nests, trying hard to learn not to expect, not to want and not to interfere in the daily struggles of their offspring. Both are failing miserably, as I sail through this  season of festivity with mixed feelings, swinging between the happiness of watching my young one make rangoli, being exuberant at the sight of fireworks, and the melancholy which moves in the backdrop of my awareness, as I think of a grey and blurry image of my parents, sitting in the portico of a lonely house, back home. This one thing I hate about festivals, just as your achievements, your inadequacies are also more pronounced.