My child..My Soul, My Salvation

November 25, 2012
Last week, barely a week after my Office trip to Thailand, I was again put on a flight to Chennai. Dutifully carrying my Kindle, this time I had firmed up in my mind to do some reading on the three hour long flight. I did what I had resolved to immersed in lovely Autobiography of Mark Twain. I must confess, I had never hitherto read Twain, some scared of his dry, serious kind of image which comes out in his pictures. But I was surely in for a pleasant surprise, as I floated in the amazing world of one of the most witty and picturesque, if I may use the term for the great verbal imagery created by the great author, memoir I have ever read.

This post is not a book review, however, ( that sure will come, in week or so, once the book is finished); not prompted by the great literature of the great author. This post rather celebrates Twain as a father, a man whose immense love for his daughter flows through the greatness of thought which forms this book. For a great portion of the first part, Mark Twain let's the reader see him through the eyes of his daughter, Susy. The love of the child for her father stands out, even with mis-spelt words, which Mr Twain refuses to correct, out of affection for the writing of his daughter, where she tries to build the image of her father, as she saw him. One can only thank him for thus protecting the sweet and liberating innocence of thoughts.

I recently had a post with a reader, a friend of mine, called Vinay srivastava wrote in, saying how given that I write presumably better than him ( his view, not correct, I truly believe, coloured by affection), my love for my child would be more then his for his child. Then, I objected, stating unless it be the case of some unusually skewed mind, all fathers would love their kids, the same, and shall be reciprocated to with the similar intensity of love by their offspring. The love you feel for some, though gets served better with expression, but its quantum and intensity is totally independent of expression. When I read with such great affection with which Mark Twain wrote of his daughter, the thought firms up that notwithstanding the fact that my writing might not be anywhere to his standard, my feelings and love for my daughter is in no way dwarfed by his towards his daughter.

The title of this post comes from the dedication in the forewords on my book, "If Truth were to be Told". When I read Twain, it stands out how a child looks at his/ her father. I realised, once one gets to be as aware of this close and admiring scrutiny by your progeny, you can do nothing but to try to improve on yourself to be worthy of your child's affectionate monitoring. For a greater part of your initial life, your growth and progress as a human being is largely defined by the expectations of your parents. Crushed by the limitations of environment and your own faculties, we give up, surrendering to a robotic existence in a life devoid of any purpose. No, delivering your sales quota does not qualify to be the purpose of life. Love in today's world rarely serves the purpose of re-kindling the lost vigour. It once attained you disowns what initiated it in the first place. One pursues a zombie kind of existence through the life, shunning away any stray memory of dreams you once had with clinical precision. This is how life for most of us goes by, which James Joyce called, a life of quiet desperation. That is, till the time when one day, we risk to view ourselves from the eyes of our kids. That thought, that idea, that vantage point changes everything. It reminds you of what you can be, if you are not imbecile enough to let your dreams slip away from your fingers. It makes you want to be a better person, if only you could take a while every morning to think of what your kid might be putting in her Journal about you, if only she could come around to write about Susy. It redeems you, and that is why I called my daughter my salvation in my book. She reminded of what could become, I looked at myself through her eyes, and did not much like what I saw. She deserved better, and I resolved to give her a better view, better image of her father. I am no longer ashamed of my flaws, once again I am proud to be so different from others. This is the thought for now, which I put here because I discover myself in writing, I become what I write. Book review stays pending for now, once I can collect enough strength within me to pick up the Autobiography, too devastated I am to reach beyond the death of Susy at twenty four, brought in suddenly in the book, almost as suddenly as the event itself might have happened in the author's life, with same force and same incapacitating sadness. It is hard to bear, and only thing which prevented tears was being an adult man, in an aircraft full of passengers. He had Susy, I have Sanskriti, and though I can never imagine to write as well as he did, even if I wrote everyday, and live for another hundred years doing so, my love for my daughter is no less than his. I will always work hard to redeem myself in the blessed, white light of your existence. 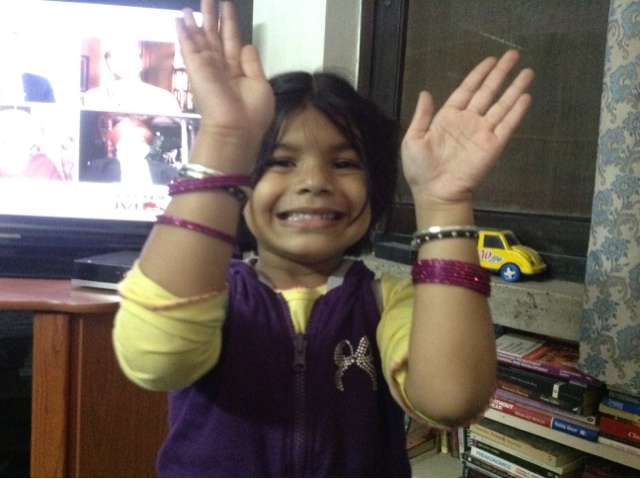