Condolences and Protest for Delhi Braveheart at Jantar Mantar

December 29, 2012
At 2:15 AM last night, the gang rape survivor, having suffered cardiac arrest, internal organ failure and brain injuries, the physiotherapist, embraced death. The days of her mental and physical agony found answer in death, of which CP Surendran wrote, "there is no grief which death can't address." 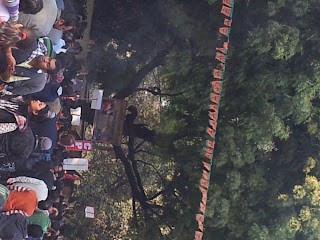 A pall of gloom descended over a charged nation, anger gave way to anguish, shame and pain. Government, getting to grips with the awakening of a demography, did respond with some semblance of empathy with its citizenry, but the unease, insecurity and mistrust in it's own citizen gave away with all messages ending with appeal to maintain law and order. The curfew was enacted in central districts of Delhi and ten surrounding metro stations were closed.

They presumed the generation which was content with creating a protest page on Facebook will not be keen enough to walk long distances, to be part of condolence at Jantar Mantar, while police kept hold of "strategic" points on Rajpath, an aggressive vocabulary loosely used by Delhi police commissioner, under pressure on the way protests were handled. Though in my view, it ought to be granted, the Police, bore the brunt of carrying out the instructions from political leadership, while the latter came out clean in their starched white, khadis.

Anyways, yesterday was a day of remorse, and as a shock to the cynicism which has become a hallmark of the crushed middle class, people came in groups adding to numbers, which at time must have reached close to thousand at Jantar Mantar itself.

I got down at metro station near New Delhi railway station which stayed open, the eleventh one, and walked across to the I reached there at one, and joined the motley group, devoid of political banners or insignia of political affiliations, for instance, caps of newly launched anti-corruption parties, or student wings of political parties which created havoc the other day.
Minutes after I had joined in a group of CPI activists joined in with their usual brand of sloganeering, slightly tailored to meet the crisis at hand, with down with government, Lal salaam, which was ok even if out of place, even a saffron salaam would be ok. She was a brave one, deserving salute from all quarters, unlike Kejriwal who wanted only publicised seculars to fight against corruption. The noise which thus arrived was quickly brought to calm by determined youths, with louder volumes of patriotic songs sung aloud by the group in the middle, which included students, women activists, elders, young and younger ones.

I had long given up on this generation, wrongly so at it proved yesterday, aghast at crazy causes they picked up, for instance one led by a movie star right before his movie was launched, to lower the drinking age, as if there was not any other cause worthy enough to endorse in this country. Strangely, did not find that worthy rent a cause actor in the emotional outpouring the nation saw in this case. Youth in despair chanted for Azaadi, before breaking into the age old song. There is something mesmerising in the song, "we shall overcome", it builds hope when all the structures on which optimism stands lies shattered in heaps. It prevailed.

A friend tweeted, candle light, peaceful assembly, all time waste. He is a very sensitive, young lad, and I felt sorry that cynicism got better of him. I wrote back, asking him, had it not been so many people braving cold, braving political apathy coming out on the street, a small group of protestors would have been picked up by a police still colonial in outlook; the brave heart would have died several days back with limited attention, medical or otherwise, as did teenage girl who was raped and committed suicide in Punjab due ridicule and refusal by police to file the first information report. Today, the officer there has been jail, first time I have seen such thing to happen, all states are setting up fast track courts for speedy justice in rape cases, a judicial commission has been set up to look into structural judicial reforms, taking inputs from people (at justice.verma@nic.in). All this done by a reluctant state which for long tried to wish the uprising away. All this could not have happened with thirty people on the street. We are those condescendingly called Mango people by ruling elite and our strength is in numbers.

As a girl from CPI cadre stood isolated with a placard claiming capitalism to be the reason of this rape, and Delhi CM who having fought battle of turf with central government while the nation came out streets, in outrage, came there around three to join the masses, but was dutifully booed away. Leadership is needed to provide direction to the angst and voice of the people, not to come into a movement which has already evolved to a clear voice, carried a vivid sense of direction, to stand at the head of it claiming leadership role. She, the ruling class, in and out of power was lacking in response all through the day. She had long taken the credits, as has central government for right action, which they were forced to take, after opposing them tooth and nail for long, they must realise people have wisened, left abandoned on their own.

While it was quite an education for the political class who abdicated the people they represent, hoping this to go away before causing them to mend their ways, it brings in a positive change. Now the commission will not speak to the houses to get input on the reforms, it will speak to the people on the street. We the people, instead of begging to our elected representatives to represent our causes to power that be, abandoned by them, have found over own voices.

The mistrust between the elected and the electorate is complete and required political class to introspect, should they want to reclaim their political role. In the current scheme of things, people do not need them, they may call a session discussion to ponder over this socio-political transformation as breach of privilege. They need to also take note, on both sides of secular/non-secular and reservation/ anti-reservation divide that the cause resonated beyond Delhi, and no body knew or even wanted to know the name, religion and caste of the victim. People have matured, to be able to again communicate with people, they need to either mature up fast or leave the space for mature people. It changed the paradigm of protest, you do not need trucks with promise of free food and liquor to bring in people, you need a worthy cause, a plain sheet of paper, and a good sketch pen, no foreign NGOs needed to fund the movement. Protesters sat their, bought and ate their own food from the food stalls.

A young boy next to me, touches the baton of the young policeman, and says," boss, it hits very hard, that day near president house.." The shy policeman, almost embarrassed, responds, " you know at times as such, with orders from above, you can not even see who to hit at." Cops, 5000 strong, deployed to guard the state from its citizens, stand in bonhomie with protesters, ordering tea for themselves. Another circle is formed with mike, where people, ordinary people speak, sometime splendid and forceful, sometime clumsy and wanting for words, but feelings are true gold. A human chain is formed, these are modest ways of claiming the numbers which support the clause for the powers that be to take note of.

People sat in gloom, no body jumped waving into television cameras, protesters just sat there, condoling the dead. It took a heinous death to shake the conscience of the nation, looking at the utterances of political leader over the week, it seems they are yet not moved enough to introspect. Why not a special session to look at actions, noticeable actions like summary suspension from the house for a complete session for trespasses from decency in speech and expelling those from political offices charged with crime against women? Why not session for police reform to get a free and more accountable police? How many more deaths they need to sit up and act? Is zero tolerance just a figure of speech or would it apply to high and mighty as well so others may not look at them as an example?

The Braveheart of Delhi is no more, cremated this morning. But for the apathy of our rulers, she had not desire to become the harbinger of change. She was a young kid with dreams of future, who just watched a movie, she just wanted to go home, and she just wanted to live. There are many like her with no name, a part of nameless masses, and they just want to live.

July 21, 2021
For last week or so, New York Times has been desperately seeking first hand account of those who were in Inter-faith relations in India. A news medium is usually supposed to pursue the news, not create them. In this case, NYT first made up its mind that it needs to write on Inter-faith marriages in India and somehow create a narrative how poor and innocent Muslim men are falling prey to the belligerent, bigoted Hindus who are not allowing their women live with those they love. Having decided the line of argument, they set about creating the articles and two initial Essays have come up- Are You in an Interfaith Relationship in India? and another How New Laws Across India are Seeking to Ban All Interfaith Marriages ,  both published on the same day, linked to one another.  As they had put the cart before the horses, it is no wonder that the carriage tumbled the moment it started moving. Incidentally, it seems those who run things at New York Times that a spate of articles, suddenly comi
Post a Comment
Read more