Spring in Delhi winter- a Nation in Angst

December 22, 2012
Cynicism is most common malaise of a modern day, middle class man. When they had shown large crowds on television, in the most recent anti-corruption crusade, I took it with a pinch of salt and blamed it on creative camera angles. 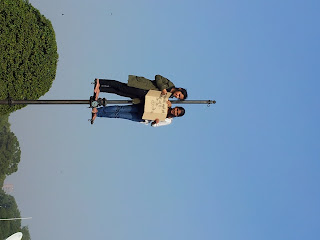 Last week, a young physiotherapist, all of twenty three years of age, boarded a bus, ILLEGALLY plying in Delhi, the capital city, at nine thirty in night to reach home from a quite populated location in South Delhi, in munirka, place always streaming with young human sea of students, BPO professionals and the like. It is one such place where night at nine thirty can be safely termed as broad daylight. The unsuspecting girl boarded the bus with her friend, unaware of the misfortune which was to fall on her and her friend and how it will push in the coming week nation to the edge of anger and the non-mango people to the edge of their power thrones. She was gang raped, and the humiliation was supplemented by unimaginable brutality, as thought to be dead, she was thrown off the bus.

As she struggled to come back to life, clawing on the edge of the precipice with bare fingernails, poorly battered, on sheer will power, the silent, vast nation seethes with anger. Protests erupted on the streets, seeking quick trial of the culprits arrested, asking them to be hanged. The ruling elite saw it as and aberration and responded with routine responses, "the case will be fast tracked (government shut down fast track courts, as they were expensive, costing around INR 500 Cr. a year), there will be a clamp down on illegal buses (we were just waiting for an incident like this to prod us out of inaction, that the buses belong to power that be is another issue, anyways, real bus owners can not be found as was discovered in Gurgaon accidental death of a pregnant woman by underage Son of a fleet owner, who could not be found by local police, till media located him), we will hang them and give strict sentence( anyways, if they get lifer, that would be strict enough for the, their father isn't a powerful congress politician in Haryana to merit easy parole)." 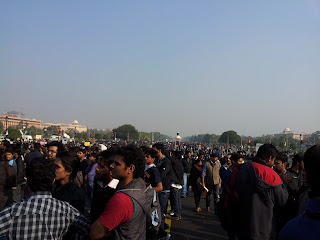 It is not much of a doubt that the criminals will be imparted speedy trial, and will be subjected to severest of sentence, not because Government has woken up, but because High Court has taken Suo Motto notice. This country methinks is being run by courts, politicians merely jump in to take credit after initially opposing the court, and at times even threatening the court to stay in limits, still remember mild-mannered Prime minister, thundering after a morning cup of Horlicks that courts should stay away from the area of governance which is for him to mis-govern.

Four days after the heinous rape as the girl recuperated in the hospital, streets where filled with people, disdainfully termed mango people by the ruling class. Steeped in cynicism, I got busy in work, till yesterday. Yesterday, decided to join in. I though maybe, we are sitting on the verge of something bigger than individuals, and when my five years old grows up, either jubilant in the changed circumstances which is being sought, with women in police stations, law equally implemented on rich and poor, with women representation in parliament, fast track courts; or saddened by the fact that things have worsened over the years( things which do not better, tend to worsen), and asks me, "Baba, where were you when the nation came together to seek justice for a life crushed so brutally?" I can not answer that I was sitting at home, watching the television, preparing for a pretentious Christmas, when the poor soul wrote on a paper to her mother, saying. "Mother, I want to live?" Is it too much of an ask?

I know the question she has thrown is not at me, I do not run the government here, but then maybe it is exactly at me, I, the common man, the last leg of the animal food chain, make the government, I lease out power to the power that be, and when I am angry with them, they hide behind parliamentary privileges, only to fight like unruly school children there. They make business investments which grows five hundred percent in an year, I work on modest salary and pay the taxes, I pay the taxes to make the roads, on which they don't let me move when they are moving; I pay the taxes with which they fund the police, and then deploy them to their own security. I am the hinge on which this country runs, and when in bad shape I make as little a noise as the hinge of the wheel of an old bicycle, and it annoys those who ride the bicycle to no end.
The question was to me and I decided to join the street at One yesterday, to search for what is the future that we have to offer as a nation, to the one in the hospital, to the one making obnoxious shapes with her building block toys, to the one fighting with me everyday to get the house in order, and get the milk n vegetables in the morning. A thought occurred to me, in scores of thousand people( though I doubted the news channels), what difference will one person make by being or not being there. But then I thought if a lot of people really thought that way, a lot of people will not be there and a small crowd will be put in a Police van, which sadly was missing on the day of barbaric crime from the spot and the merry life of wresling, and jumping in to the well of the House in nearby parliament will continue unabated( Why do they call it a well, and the member parliaments jump so often into it, given the state of the nation, I wish they had a real well there for them to jump in).

Anyways, as I saw things developing there, a sea of crowd emerged, without the lure of a bottle of alcohol or promise of any money, much to the shock of political establishment of the country, noting the belligerence of the police, I was certain my worst fear would have come true if the turn out had not been so large. There were kids, school and college kids, families, older people, and two of them older ones. mounted the wall of majestic Raisina Hills, the seat of power for brown sahebs as Bhagat Singh feared, and raise tricolour. A chain of barricades separated the government from those who make it, backed by well on toes men in khaki and para military in blues. Grand sight it was people jeering, shouting for justice, to the deaf ears of the elected leadership, as eagles circled ominously over the parliament, the citadel of democracy, the most sacred, as the could sense something dying on the ground below. Water canons were opened, tear gas lobbed and batons were used, while barring minor skirmishes, the protest was so peaceful that couple of parliamentarians were seen walking with the protestors, without security bandobast, without any security threat, merely angst-ridden questions to face. It is sad to see crowd shouting at the poor police force, which has been rendered mere supplicant servant to the government, what with police reforms pending for years. They too have daughters and sisters and are poor enough to fit the bill for being common man, thrown by occupation on the tyrant side of social divide. One can not but empathise with them, who would not empathise with a man forced to do a job to which his heart does not agrees. My only hope is if the protesters can see cops like that.

Anyway, came back home, hopeful and ran through the tweets. Noted journalists lamented over lack of response for the political leadership. I felt, with such crowd on the street braving Delhi winters and water cannon, and thought leaders paving the way, response will come, albeit late. That response would define and demonstrate to the world the kind of leadership we have. It was to demonstrate that we have a thriving voice of the masses, which is heeded to and which can guide the country to seek a course correction whenever we falter. The need of the hour goes beyond one rape, which is not the first and seemingly not the last. While the gruesome nature of the crime pushes people to sloganeering on expected lines, Hang the culprits. But we say so because they are caught, because we know who they are, because they are not part of "Do you know who I am" crowd. What would happen if they belonged to the High and mighty? The disease is deeper, and we must not let today make us loose sight of tomorrow. Hope this sad event will catalyse ever sleeping governance to take real actions, at structural level. This cancer will not be cured of a Band Aid. Police reforms, crime against women bill, pending for years together need to be pushed through.

The government responds, the emperor has spoken and I am shattered. The response is - no need for a parliament session to bring about bill (poor girl is too disconcerted to pay for lobbying fund to merit exceptional session), no metro trains to four adjoining stations near the site of protest, Raj Path, the path of kings, aptly termed so, in order to restore it to its purpose away from common folks and no media allowed and Section 144 in the area. I went out to the balcony and anxiously picked up the newspaper, but no blank pages yet, they missed out declaring Emergency, which would have completed the response of a responsive government to its citizens. I am worried, have they killed the spring this winter? 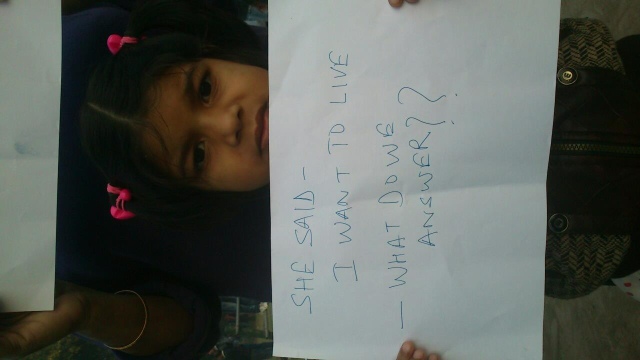