Book Review- The Autobiography of Mark Twain - By Mark Twain with AlbertB. Paine 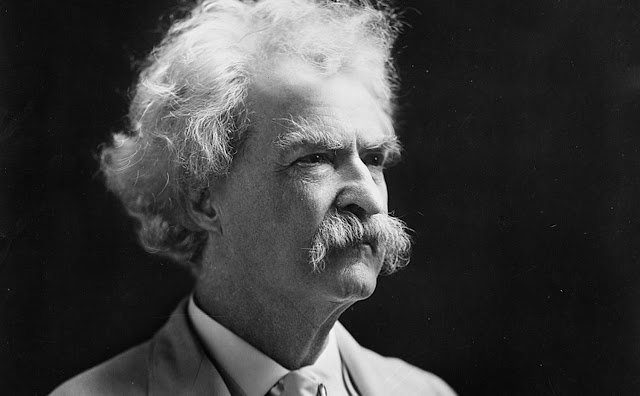 A charmed life of a charming personality. The book is written in an, should I say, extraordinarily lucid and eclectic style, moving to and fro between different life stages of the genius author's life.

I picked this book wish a sense of trepidation, Mark Twain (November 30th 1839-21st of April, 1910), or Samuel Clemens' stature being some sort of nobleman of highest order in the world of authors, a high royalty in the royal court of literature. Notwithstanding his excellent repute as world's leading humorist, I found it hard to pick the book and run through it without a sense of awe and an inexplicable fear of not being able to raise my intelligence to a level required to comprehend and appreciate the humor of the great writer, and thereby exposed to my own blatant stupidity.

But I did pick the book up, scared and bewitched. The Autobiography of Mark Twain, the illuminating words of the master, splendid enough to brighten the darkest of the nights, supplemented by historic inputs from Albert B. Paine, which towards the end of the book, amply demonstrates why he was bestowed with the coveted Pulitzer, with his beautiful and elegant prose rounding off the magnificent book.

Must confess, troubled by doubts over my own writing style, I picked this book up to be able to learn some tricks of the trade and tricked I was into a charmed life. It is not much about rigors of writing, the trials and tribulation which an author of highest order must have faced while producing some of the greatest works of literature. To my utter surprise, it is not heavy book even for a moment; it sits lightly on your intellect, not for once intimidating, and it lovingly lifts you up in a happy, bright world of trees, happy families, friends who do not meet you to fill their Friday nights, adventurous kids, enterprising young men, sunny days, and enchanting brook in the bushes.

Twain, the darling of American speaking circles of the day, leans on lovely journal excerpts of her daughter Susy (Olivia Susan Clemens) which forms an affectionate and indulgent biography of her father. Her mis-spells notwithstanding, which Mark Twain retains with obvious love and insistence, ("cannot bring myself to change any line or word in Susy's sketch of me...coming from beautiful heart of child" writes the doting father) shows the bright sparks of amazing control over words she had even as a little girl, somewhat hereditary. Susy was five year old at the time around which she set herself on this endeavor of writing the biography of his legendary father. The leitmotif of the book is outstanding sense of happiness, which runs in the backdrop of the book and Twain's life, even through the sad episodes of death of his mother, his wife and most devastatingly painful demise of Susy, graver by the suddenness with which it appears in the book. It suddenly breaks down on the reader. I had closed the book for couple of days before I could gather the heart to return to it again.

This is a simple story of a life well lived, in magical times and lines from Susy's biography of her father furthers the magic, and shows great insight into the subject which only a child can have. The love of the father is outstanding, and in spite of his unequaled literary greatness, the deep sense of affection stands out when speaking of grammatical or spelling errors, lovingly he proclaims at another place (one I have referred to above), "It was Susy's and it shall stand. I love it and can not profane it. To me, it is gold. To correct it would alloy it, not refine it. It would spoil it." The moment when Mark Twain writes this, all the ice of awe which wrapped around me on melts in the sudden warmth as he comes across as a father, as any father, with as much love for his daughter as I have for my own daughter. It was as if divinity reached out from the Heavens and touched the mere mortals. He immediately becomes so alive, so close to me, so one of us, like a colleague with whom I drive to work, someone who lives next door and maybe a doting father next door to you, trying to take his kid's snap on School's annual day, much to the annoyance of other parent. Suddenly, in stead of an awe-inspiring figure, you find breathing through the book a human figure, who will bleed if he were to get a bruise in the arm and would ache in pain like you and me.

Samuel Clemens was a temperamental man, with a youthful sense of adventure about him which stayed constant companion to him all his life, which Susy forgives saying, "he has temper, but so does everyone in the family". Only a daughter can be so forgiving to the faults of a man. A devoted family man, he was much loved for his story-telling within the family as much as in the wider world, as Susy, his closest biographer says, in the most simple yet most affectionate manner "he does tell perfectly delightful stories" and how the world loved the yarns he knit. An accidental writer, not someone who dreamt of being a writer all his life; a soul with a love of life, and a love of experiments, which saw him investing in multiple failed business ventures, for instance, the doomed typewriter, becoming a pilot on Ship to Mississippi,where he earned his now iconic pen name (Mark Twain - Safe to Navigate), before becoming a journalist finding success with an essay The Celebrated Jumping Frog of Calavaras County, a celebrated speaker and eventually the greatest writer language has known. I would hazard a guess, may be this earned him the affectionate address from his loving life companion, Olivia, who called him 'Youth'. Rarely one finds a youth so youthful.

The narrative has some very lovely and amusing episodes like the alarm installed in his home, which was so erratic in its operation that in his inimitable style Twain claims they found "it was buzzing its blood cuddling alarm merely for its own amusement." The episode where having been caught swearing by his conscience-keeper and adoring wife, the author wanted to escape, if possible, through the windows, but couldn't. Ah the charming pleasures of a quaint world gone by. The punishment he was assigned for the slip is equally telling as Mrs Clemens or Livy, as Youth called her, makes Mr Twain's repeat his utterances to himself, thereby making him note the cruelty and ugliness of his own swear words. That was the time when a pause had a place before words, where the words were not loosely spoken nor loosely responded to (there is a very detailed account of Duels in the United States and Europe those days, one of which Twain missed by a blip, to the relief of literary world). Blessed is the world where words are treated with such respect, love and affection. The overall jovial tone of the book continues till the day Haley's comet returns in the century to take back it's prodigal Son, except the death of Susy at the age of twenty four, which he calls the happy age to die, but it is hard to miss the pain which sneaks through cleverly-crafted words, as he tries to possibly assuage feelings of reader or may be his own, claiming "after that responsibility comes and with it cares, the sorrows, and the inevitable tragedy."

This is an amazing life story of a great man and great wordsmith, with enough of the buoyant winds in it to carry any sagging spirit to soaring skies of happiness and contentment. It is an example which amply proves that one always has a choice if only one is willing to pay the price for it, and no price is too high to earn the right to hear to the raging voices within your soul, and in the end, nothing is more satisfying, irrespective of whether you survive from one visit of the comet to other or not. This book is about the warm soul of a genius, his struggles, his unyielding spirit, his eventual victories- A life well-lived.  He had quipped about his own death, referring to his birth with Halley's Comet- It will be a great disappointment of my life if I don't go with Halley's Comet. The Almighty had said- No doubt: Now here are these two unaccountable freaks; they came in together, they must go out together." He died of a Heart attack a day after the Comet arrived.