January 08, 2013
India has just come out of a tumultuous year, which ended with the sordid saga of the gang rape of a twenty three year old, on the streets of Delhi. Culprits caught, what haunted the country was the rage that filled the streets of not only the capital but also the rest of the country. Driven to the brink, the outrage pushed the envelope and made the fumbling leadership sit up, and try to regain the lost ground with some new measures protecting the women, and a near autocratic ban on all protest neat the citadels of power in Delhi. The city having faced the ugly face of autocracy and those in power, having seen the audacity of the unheard and unseen, got back to life as usual, with the fault lines dividing the ruled and the ruler, more prominent, more clearly defined than ever.

One could not have asked for a worse start to the new year. The enemy inside, the Maoists, fed and nourished on the same state they claim to hate, attacked CRPF jawans and taking a leaf out of the brutal savagery of Pakistan army which a week earlier sent across the mutilated bodies of two Indian soldiers.
The bodies of the two gallant soldiers, Lance Naik Hemraj and Lance Naik Sudhakar Singh, reached back to their homes, without heads, mutilated by the butchers, camouflaged as soldiers on the other side of the border. Their pictures came on Facebook, and no they were not intimidating warriors, they from the look of it, were one of the faceless and nameless masses, like you and me, who mean no more than statistical figure for a hard headed, stone hearted state. The state which had earlier shown unprecedented and unbelievable lack of affection to its citizenry in the aftermath of sad demise of twenty three year old Gangrape victim, underlined by a brutal clampdown on the civil protests, a long, poisonous silence of the state and a statement of the Hon. Home minister of the country wherein he claimed that he can not be expected to rush in every time a hundred tribals are killed in Chattisgarh. I am yet to figure out, the threshold number of deaths which will entitle the deads to earn the kind attention of his honor.

The ever smiling minister once again came forward after the mutilated bodies of the soldiers was received by a deeply disturbed nation, with his smile intact that the freshly launched Visa regime with Pakistan will continue, the skirmishes of the border, notwithstanding. What is amazing about this government, or the pretence of what we poor electorate believe to be a functioning government is that you will never find the person responsible speaking to the people. Home minister will speak about the parliamentary affairs, finance minister will speak about defence affairs, Minister of External affairs will speak about state's welfare schemes, as if they were to be rolled out across the border, the defence minister seldom speaks, the prime minister never speaks and the head of ruling coalition speaks only in election times.

They silence speaks lack of love for the country and its sensibility, and the disdain with which they look at the public opinion. In keeping with the usual pattern, it was the Finance minister who came out and spoke that heads or no heads, peace process will continue. Well, I am no war-monger, have no love of blood, but I am finding difficulty in understanding why dialog between the two nations, conceived and built out of mistrust is necessary imperative for having peace in the region. Even as ordinary mortals bereft of the huge sea of intellect which is at the disposal of the mighty state, advising it on matters of policy, national pride, sovereignty and such, we understand that best way to handle those who are behaviourally negative to you ought best to be avoided.
It is always too taxing on the nerves to continue to deal and engage with those who have inherent dislike towards you, more so, when the dislike borders heavily towards an explicit and obvious hatred. It then becomes imperative for your mental and moral security to have nothing to do with such people, as individual, and such nations as a nation.

It also leaves you with more time at hand to engage, cherish and nourish the relations which are rewarding to the soul. On the foreign policy front, we have on our other borders, friendlier nations with outstretched arms like Nepal, Srilanka, Myanmar, even sometime errant Bangladesh. The time and resources we will have freed up by shutting the window towards west, through which most of the times only dark winds of hostility flows, can make great impact to the relation with our other neighbour,constructive relationships and overall regional growth, with the one rogue state rotting in its own mess, which it has earned through its evil designs, which has shadowed the entire world.

The formation of the state of pakistan itself is based on mistrust and insecurity on which it gets fed constantly and consistently for its existence. Devoid of it's mistrust and imagined insecurity of neighbouring country and religions, it still is insecure about continuance of its existence. It is near impossible to have a worthy friendship with insecure mind. This holds good in individual as well as international relationship. The free entry of their artists to wider indian market, their cricketers to wider indian spectators, their goods to wider indian market through one sided most favoured nation status to them, has not yielded any results, nor has India's adherence to treaties necessary for Pakistan's happy existence shamed them into any decency. Absolute hatred and hopeless mistrust can not be shamed into a transformation into a trusting partnership and great love, by one sided endeavours. Such an effort is always doomed and headed for perpetual failure. Any relation without equal fervour, effort, intent and sense of urgency from both the involved parties is doomed to collapse, simply on account of lack of balance and is bound to cause nothing else but despair, desperation and deaths in worst cases.

As a nation, this plain, simple human fact is something we would want our leadership to understand and act upon. These are not complex proposition but simple thoughts of a simple, but rational mind. I would like to presume that there is a vast expanse of population in this most populous and ancient part of earth, which is not crazy about entertainment at the cost of national pride and honor. I would like to believe that there is a large section of this great country, who either do not believe in Gods, or at least not in Gods termed so for their professional excellence, who grieve for dying sons of the country. I would like to believe that they are as outraged as I am, who can not continue to seek pleasures of sight and sound coming from those who kill and mutilate our brothers. I hope the leadership, which has hitherto been wanting in its responsiveness to it's people, will wake up, feel the pain of those why die protecting their happy sanctuaries in Delhi, before the outrage, not finding a vent, a direction, a leadership and a hearing pours out into the street; I would like to believe, as nation, we are aggrieved, pained and incensed enough to want that kind of response with definite actions and defined spine from our leadership. No sir, condemnation followed by business as usual, singers coming cross border, players playing hockey is not acceptable and it will be sad day in the history of country if such stupid and inept handling of nation's pride continues. A nation which can not respect those dying to protect it isn't worth the piece of paper on which it's map is drawn by school kids in pencil. Let us arise and stand for our humiliated pride, and resurrects our sense of nationhood. For once, we can copy our errant neighbour who even after the brutal adventure has preceded with closing ties with our nation. Why can't we for once stand in solitude with grace, without the need for neighbourhood chatter? The individual or the nation, which can not embrace a dignified state of solitude without a sense of deprivation, and can not cherish self-sufficiency, is doomed to sad and troubled existence in perpetual distress. 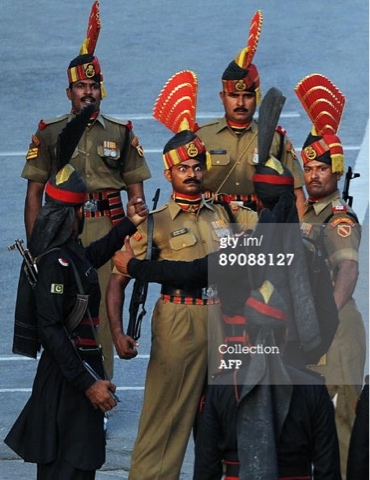