November 14, 2013
"Without music, life would be a mistake"said Nietzsche, the nihilist philosopher. Plato spoke about the all encompassing 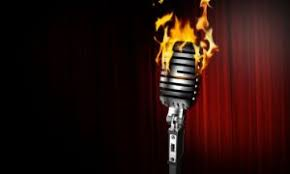 nature of music when he said,"Music gives soul to the universe, wings to the mind, flight to the imagination and life to everything."


A wise man in Kashmir, sought to contradict them and said music was the way to hell, and the harbinger of moral decline of social morality. He, in one ambitious step, nullified the wisdom of centuries; re-defined religion and killed music in the land of amazing beauty.


He, one night came on the national television, gleefully claiming his space in the drawing rooms of a nation to claim that when girls are put in the close vicinity of young boys, without the great, protective shield of the veil over their heads. This murder of music, this lunacy is one such evil which can not survive a day without pretentious sanction of religion. In the illegitimately gained legitimacy of interpreted religion, voices are muffled.


We are, pushed by these 'protectors of society' into Stone Age. The censor board already has been rendered redundant by the street protests, some days back against a mediocre movie, which gained audience on account of controversy, days after missing the misfortune of missing the audiences, by virtue of a dogmatic and eventually, conceding producer.
﻿


Since that is a wish not to come true, I let my five year old play with the blocks, cherish her play of 'Snow flakes, Snow flakes, Li Lo snow flakes'. I am waiting for the slanging matches on the television, with angry participants, and an angrier host, foam out of mouths, shouts. This is the way of the things, this will be getting worse in the days to come, as we move towards the elections next year.


All the intolerants, angry, violent voices has come forward. Those who were lesser cowards, abused the singing kids from behind the social networks, bigger ones threatened the state, which dithered, then tweeted, then dithered again. The Pragaash girls, all girls rock band had a voice too feeble to survive the cacophony of threats. A nightingale is killed, with its tiny neck broken by harsh rope of intolerance. Angry people, with their respective sets of mobs are setting their stalls, showcasing there wares of violence, threats and abuse. With elections around, buyers would be soon coming along.


I brace myself for a shrill silence, devoid of music. The nation decays, Mufti smiles and kids lower the gaze, take off their wings and put them in the dark, iron box under the bed. There is no sky to soar across to, there are political flags flying frantically, leaving no patch of free sky to fly in. We all the citizens of this nation which pretends to be the largest democracy, are resigned to a life, without the giggles of the kids and the music of the soul. We are doomed to a life which is a mistake, a mistake which will pass across generations, as the government stands mute spectator. The valley looses its heavenly voice and a deep silence pierces the skies with such a sorrow that heavens would cry. When  the music is killed, only anger floats across the world and tired souls go about their submissive existence. A state which can not throw its weight behind a lonely voice of dissent is a failed state and a state which can not defend art is devoid of morality.

Priyanka Desai said…
I read your short stories on StoryStar.com and now reading your blog. Completely blown away by the way you write. Each word has a grip on the reader. Count me as your fan. :)

P.S: I have just started with my own blog and it will be my honour if an established like yourself can take a look at it and give some suggestions.

Saket Suryesh said…
Thanks, Priyanka for the visit, kind comment and connect. Thought I am far from being established writer as suggested, being a moonlighting writer of modest talent, will sure share comments on your site to best of my abilities. Look forward to your future visits. Keep writing
November 22, 2013 at 9:34 PM