February 02, 2013
I remember with fondness, a time when I was six years old. I was travelling with my mother in Bihar when she and all the famous fives of them(Five sisters, my mother and her sisters, my Maasis), boarded the wrong train. Those were the times of tight purses, and strict expenses. Thus as we had it, we could understand the blunder which was committed, only after journeying in the direction opposite to the one originally planned for. By the time, trains were swapped and new tickets were bought, the funds touched the bottom lining of the purses they carried.


As we rode back to Munger, the hawkers came into the train compartments with loaded temptations. Ah, those were wonderful times of great snacks selling with lovely sounds inviting you to buy the stuff, against the chugging sound of the diesel trains. One hawker, I remember, was selling eggs, the boiled one. I asked for one, and he stood there. I asked my mother more, then I begged and I do not remember well, but I may have, rolled on the dusty floor of the compartment. Driven to the wooden wall of the train, my mother claimed that I was just throwing tantrum as the saint that I was, I never had eggs. Now, being thrust into sainthood is a bit too much even for an adult, for a child it was totally unbearable. Tears rolled and I muttered, "But I do eat Eggs." I was immediately shut to silence, perforce, lest the hawker continued pestering those ladies with so light their money bag that it would have strolled up in the skies like helium balloons had they not been clutching it so hard in their worried hands. To every one's relief, the hawker passed on, not hearing my plea and the journey could conclude, eventually in the right direction, without an embarrassing intervention of an egg.
That was my first encounter of an affront to my kiddish freedom of expression. Well nothing unique there, we all have had such moments in our lives, especially those who grew up in those days when parenting with friendship towards your kids was considered poor parenting or usually no parenting and constituted utter parental neglect. That my parents, now being grandparents, deny ever having subscribed to muffling the voice  of a child as a part of parenting, when it comes to my little daughter throwing tantrum in front of them, is another matter. 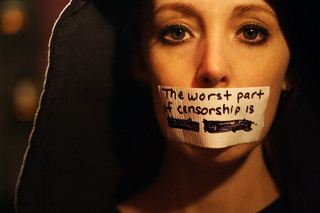 But let us go with the fact that we all have faced such experiences when we questioned our right to speak out, eggs or no eggs. In fact, if I were to think of it rationally, they had valid reason to curtail my right to free speech, at least on this occasion. My freedom of speech, denied them the right to not hear it and required to be funded by them.
We, as a nation, have just passed with the Sixty-fourth republic day last month on twenty-sixth of January. That was the day on which we as a nation gained adulthood setting up our own code of conduct. That venerable tome contained within its being sacred Article 19, sacred for every free thinking individual of the nation. The nation coming out of a long colonial rule, prized this right to free speech close to its heart. All the leadership of the time, had faced the brunt of a heavy-handed state, crushing any dissenting thoughts with swiftness in order to preserve a fledgling colony. Their own experience made them value the significance of varied thoughts and opinions. We only grow through the ideas which challenges our own.
The trajectory towards the emancipation from the burdensome yoke of obedience and subservience, which took flight upwards, wobbled sometime in the late 1970s with first ever imposition of emergency, and thankfully the last.
We came out of the emergency with the dictatorial doctrine humbled, but the Djinns of dictatorial thought never went back into the proverbial lamps from where they came from. The history since then has been peppered with the instances of control over free speech.
Salman Rushdie was probably the first notable in this regard. He came out with a novel, which went on to win him many laurels across the literary world, earning thereby a seat for him among the knights and barons of literature. That was worst moment for Indian democracy. One could have still lived with a suppressive state, which being in full public glare and constant scrutiny by an ever alarmed judiciary was less prone to act arbitrarily, at least not on its own. The sordid saga of banning the Rushdie book, brought forth the mob to call the shots.
A public threat by religious leader was not used by the state  as an occasion to step forward and reaffirm its support to lonely and dissenting voices and put on leash the ferocious animal on non-tolerance which the leader threatened to let loose. The state buckled and banned the book. I have not read the book, The Satanic Verses, till date and have read Rushdie only recently, his memoirs, Joseph Anton. But I was so very disappointed with the state which bowed to the wishes and fancies of the mob.
The book was not to be a part of school or college curriculum. One had to buy it to read it. The right to read or not read was always with the individual. Why should the state intervene and decide for the people, what they ought to read and what not? It set about a very dangerous precedence, the fall outs of which we are watching even today. I do not have much of love for a particular kind of music, but that does not automatically entitles me with a right to put to end that kind of music, only because I could gather some number of like-minded people to come out on street and threaten with numerical power an eventual possibility of violence.
After that we had many of such instances of intolerance, with the paintings of MF Hussain banned, and the highly acclaimed artist being forced to flee from the country and eventually dying in exile. Even his death could not bring about much change in the way we are governed. The logic of my being against the actions against MF Hussain is similar to that about Rushdie. The exhibitions were not held in college campuses, he did not threaten to put those pictures considered offensive, (even, I do consider them offensive to my taste and faith) in your houses and hotels and public places. You were not forced to watch them as you were not being forced to read the Satanic Verses.
As an apology to secular thought, people many times tend to consider the Ramanujam's essays on Ramayana under the same category. But on this I beg to differ. That was a totally different case. This book which many found offensive, being contrary to majority religious beliefs, was being forced into college curricullum. That way it was being thrust in  your face. That is wrong. Not for banning the book, the book should be available in the book stalls, and it should be left to people to decide if you want to read it. There is Arundhati Rai, a perennial rebel, threatening as a columnist put it aptly, to secede from the country and establish a mobile republic of her own, with herself as the government and citizen. I never agreed with her ideas, but I had my keyboard to write about it. I had my own limited vocabulary to counter her exquisite one, to urge people to not read it. But I never subscribe to have a right to get people on streets to burn to book and bring the state to ban the book.
Last couple of years have been a journey in the downward spiral as a nation (as we reached the low ranks of 140 in a list of 170 nations in terms of freedom of expression, so much for being a democracy) at such breakneck speed that it threatened to break the collective collar bone of our national intelligentsia. Our collective heads hang in shame as the nation reels under the draconian Article 66A.