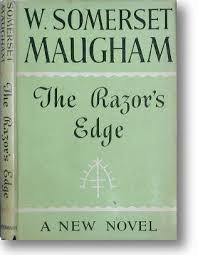 No one, I repeat, no one writes about the agony of youth as honestly and as brilliantly as Somerset Maugham. It is not easy for a writer to resist falling into the traps of idealism, realism, some -ism or other, and obstinately and courageously decide to tell a story as it is. The Razor's Edge is one such brutally honest story, which touches your heart with the strength of simplicity. It does not ask you to stand on the toes to watch the horizons, it sits you down holding your hands and tells the story of a difficult youth, wretched but hopeful youth.


The story spans almost the entire life of Philip, the club-footed protagonist, beginning from a melancholic childhood, following it through with a stubbornly, lonely youth till eventually he finds a resolution in the person of Sally. There is no melodrama, he narrates without any attempt to dramatize, or moralize. Maugham is a writer's writer and that shines through the simplicity with which he tells the story. There is immense beauty in truth which does not need any ornaments. You notice you are holding in your hands something divine, but not ostentatious, when the book opens with "The day broke gray and dull. The clouds hung heavily, and there was a rawness in the air that suggested snow." The words carry such expressions as if they hold your hand and guide you into a different world where not only you see the clouds, but also feel a slight cold.
The author writes about the sadness of a child who has lost her mother, without any sense of drama, as he talks of the child "deprived of the only love in the world that is quite unselfish." There are no heavy sounding words trying to extract your tears, but you find your eyes nevertheless when you read that "he wept as though his heart would break." and it isn't only Philip whose heart breaks. The affable and simple hearted Mrs Carey seems like those homely women which we encounter everyday, who find happiness in the well-being of their families and better-halves.
Maugham is a brave writer without any bravado when he writes regarding Philip who thought that, "his prayers were more acceptable to God if he said them in his nightshirt than if he waited till he was dressed." and referred to a God 'who appreciated the discomfort of his worshipers'; That was more iconoclastic than Nietzsche in a sense that it is so sweetly wrapped in a story well told and seriously felt.
Maugham plans not to become a philosopher, he enormously enjoys the multiple vantage points which being a story-teller offers him. The book is densely interspersed with deep philosophy, but what makes it great is that unlike a purely philosophical tome, this is not monolithic in view. The honesty is sometimes shockingly brutal, when Philip grows up in the middle of schoolboys cruel treatment of his physical deformity and becomes a young man searching for the meaning of life and love, both at the same time. It is shocking but in the hearts of our heart, we know it is true, kids can sometime be cruel, even more than adults.
It takes a rare innocence to delve into such human shortcoming. The death of Fannie Price is a touching episode, Philip's first real brush with death. It is sad and heart wrenching to find someone dying of starvation, so sad that even her being a failed and incompetent artist does not matter. That is followed by Phillip's woeful perusal of Mildred, a cold and scheming woman. One really wishes to hold Philip back and shake him by his shoulder as he again and again sets himself up to be betrayed by the woman. He eventually ends up starving and homeless, before rescued by the Athelny family which eventually also end up offering him love in the form of Sally, thus ending his life long search and yearning eventually.
You live your life one more time as you read this amazing book and that is the beauty of this book, it feels like it is your own life journal.
Rating- Not to be missed, you will discover the meaning of life together with Phillip.