April 04, 2013
Starting late from Delhi, at close to Twelve, pressure mounted regarding when to reach the mountain. Quite unlikely to all other drives we had taken, this one had no plans, no bookings, no destination. Well, no destination in physical sense, only destination sought was the sense of closeness, a rekindled happiness in the shadow of excitement laden, mild uncertainty.

The roads were smooth, welcoming and friendly, as the Sun, settled leisurely on the hammock of blue clouds. The skies were pregnant with the possibility of an impending rain, which showed in layered colours of oranges and blues. Love after years of marriage becomes like an old currency note lying at the corner of wallet, loosing the crispness and fearful of an eventual loss of value. It deems fit that the note be taken out and shown the divine light of sun through sudden outings as this. It is no wonder that in the Indian mythology a board game, claimed to be first in human history was created by Lord Shiva for his wife. Play is an important adhesive, apart from love which keeps the family together. To doctor slightly an old saying, the family which plays together, stays together. It is amusing that the love and care and affection which initiates a relation, looses its sheen in the very security of having establish a relation and thereby threatens it.

Stuffed with the most amazing parathas at Murthal at two, we touched Chandigarh at six and after a quick high tea ( well, it was a tea at a high altitude ) at Timber Trail, right where the mountains begin, we began ascend. As we drove through the mountains, creases of worry emerged as we started knocking on hotels on the way, to be turned away. Eventually, reached Shimla, in the slight chill, by ten at night.

With anticipation, took turn from the easy to miss, slight U, directing to the assembly, and went up to the narrow road leading to the government run, The Peterhoff, an amazing property, thought bereft of shining upkeep of a private run building. The building looking like an old giant, lost in time wrap, kneeling on one knees in anticipated knighthood, towers over the cities numerous hotels, perched over a hillock.

The following morning brings the building to life. The quaint building is huge, with large rooms, which are more like an apartment with huge halls, and high ceilings, complete with its own powder room. It is like a Scottish mansion, with large manicured lawns. I do not know why i suggest so, since I certainly have limited understanding when it comes to define work of art or beauty and find my vocabulary sorely inadequate for the purpose. I call it scottish design since to my mind it resembles my idea of a a Scottish villa, and leave my architect friends to dissect it further for accuracy based on picture I enclose here. 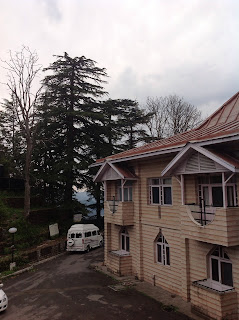 When staying at such places, it is hard for minds not to wander off to the people who would once have resided there, the fun and frolic days. One can not but think of an imaginary past without a slight sense of remorse. Sometimes, you strain your ears to try to hear the sound of children giggling and running through to long galleries, pretty young ladies getting ready in brilliant gowns, for the Ball. Ah, that grand old man, with straight gait and people talking in hushed tones, and suppressed melodious and twinkling laughters of women. I try to hear hard but all I hear is birds chirping in happiness. I sometime think of myself as a medieval knight stuck in today's world.

The windows are large, opening on to the balcony, overlooking the majestic pine trees, standing like a meticulously dressed orchestra, ready to play the symphony. A radio station tower stands like an old stately guard. Nonu is ecstatic, with the chandelier, the carpet and the snuggle in the soft bed. She jumps around in the room. She is like a chained melody released in the happy environs of the mountains. There is something divine in the sight of a child dancing with abandon, and I sat there getting drenched in the divinity of the moment.

We stepped out in the lawns overlooking the valley surrounded by mountains as protective and loving and silent as a father. The sun was bright and we walked to the bird sanctuary claiming to be housing rare birds. The inhabitants which are there primarily are peacocks and some ducks. It is a small walk through an island of birds but fun with kids. This small birds land separated the hillock on which Peterhoff was stationed from the neighbouring hillock on which the President's summer house.

We walked over to the exquisite building and this truly was Scottish architecture and my confidence in claiming so is backed by the official guide which is mandatory to take as you step in for the short tour. This is a lovely building, with lovely designs on its well preserved walls. It carries a great sense of history in its silence, being the site of the finalisation of the partition of India, which continues to bleed both the countries till date. When religion sets the agenda for polity, blood is sure to flow. The building also housed something of a photo museum. We looked at the lovely pictures of Lady Minto and Lord Dufferin, latter credited with building this house.
The guide showed us from outside the erstwhile ballroom, now converted to a library for the students of Indian Institute of Advance Studies, which is now the owner of this establishment. The exchange of the grand and exquisite for the practical and necessary is somehow saddening.
By then we could hear from a distance the rumbles of the thundering wheels of the chariot of rains for a distance. We rushed back to the hotel, before savouring a simple meal ( simple and easy on the pocket) at the cafe next to the President's house. The thundering army reached the mountains and rained for the next couple of hours. There is something very nostalgic about watching the rain, from the balcony, and listening to the tapping sound of the raindrops falling on the roof, nostalgic and rejuvenating. I sat in silence on the balcony with my daughter and we watched the rain in silence. I thought about lonely afternoons in the rain and watching raindrops slowly slipping from the steel bars on the windows, and also thought if Nonu is going to think of this afternoon with the same sense of affection and longing when she grows up.

As we woke from the afternoon siesta , the rain has passed and the Sun was up in defiance. The Earth looked fresh and splendid and greener. On mountains, the rain does leave sadness behind. It passes off with grace and charm and leaves a sense of happiness behind. Nietzsche said we should know when to leave this earth, I posit, we should also know how to leave, which is like the rain in the mountains, which cleanses and brings in something which buoys the souls, which are left behind.

We left next morning to Naldehra, which is 22 kilometres from Shimla and boasts of the highest golf course in India, or was it Asia? am little confused. The road passes through Victory tunnel and takes a by-pass from Dhalli to take the steep rise to Kufri and Naldehra. A slight turn after Dhalli to left takes you to Naldehra. The drive was steep and slight mountain sickness crept in and we had to halt in between. Gave a walk to Nonu and journey continued to Naldehra. The place is hard to notice but for some designated car parkings on the roadside and horses waiting to give tourists a ride. The Himachal tourism Golf Glade is on the right. We took a cottage on the top, right adjacent to the picnic spot, which has shooting point ( on account of movies shot there) on the other side. These two being one of the three spots which the guide who you would find at Dhalli will promise to show you. So as we see, if you stay in the HP tourism place,you would not need a guide. All the places to visit in Naldehra are within the premise of the government run place, staying where also entitles you to the Parking next to the golf course. The golf course is well maintained and picturesque, nestled in the mountains. We learn that it was built in 1880 by Lord Curzon. He loved the place so much that he named his daughter after it. The story stays with me, on account of the protagonists involved.

The princess of Shimla will be a villager kid in the cottage for a day. Evening we had some adventure sport with zip line or something were you slide by the wire. To the appreciation of our daughter, we, both the parents went on the zip. Then we went on the horses, as they went by on the steep mountain path, we held to our nerves. Nonu established a friendship with the horses discovering their names as Neeli and Baadal. We went around the golf course and then retired back to the cottage after Nonu bid goodbye to her new friends with thanks. The next morning began with me and Nonu having Maggi at the tea-stall in picnic point behind the cottage, as the Earth was waking up under the affectionate Sun. Nonu went for a small ride with another horse, with slightly better built and an English name. We started the journey downwards by twelve and bye-passed Shimla. By evening, we touched the planes and by night we were home with worries of a workday the following day. I am back not to work better, having rejuvenated, but to work harder to ear another of such spell of togetherness and tranquility.

PS.. This post was delayed on account of travel and missed the weekend which I target for the postings. But this getting away was much needed to repair the soul and also in a good way to know that I was missed as was pointed out by Soham on twitter, who said he missed the post. It is fulfilling to know that one is being read, it makes all the ordeal of moonlighting as a writer worth it's while.