The Ethical Resposibilities of Fatherhood 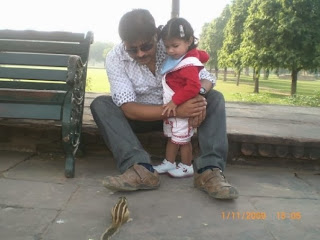 Yesterday, I was at the mall, to watch a movie which turned out to be mediocre. However, that is not the case in point. The case in point is different. It pertains to the incident which happened right before the movie. As we reached the mall, and tried to look for a parking slot, we could with our senses fully alert could notice a family getting into a car and about to leave, thus vacating the slot. I halted my car there and waited patiently as the car in the slot backed out. But lo and behold, before I could move into the slot thus vacated, another car which saw the leaving car and my car intending to move in, from a distance, suddenly rushed in and claimed the space. I was aghast at the behavior and shameless attitude. It was deliberate and it was outrageous. I expected it to be some rash young man of neighboring village of sudden wealth to be driving the car. But no, out came a family of three, with one kid, and the man, with clear reflection of education  and affluence writ on his face.
Wife urged me to fight for the space which was rightfully mine and I adamant as ever refused. It wasn't worth it, it was too petty a reason. I looked at the child, of around five who emerged out of the errant car with his father and bemoaned the loss of ideals which loomed large over his impending life. This is the kind of morality which his father would be leaving him with. He will grow up believing it to be alright to be shamelessly competitive and callous.
He wasn't a big, intimidating man- the father. He was a rather slightly built man, of small height. It wouldn't have been very difficult for me to physically intimidate him to the acceptance of the guilt. But then, for every child, his or her father is the last word of strength. It would break his kid's heart and a parking slot wasn't worth that. We all grow up believing our fathers to be infallible person and the times when we discover the fallacy of our belief, is always a life-changing moment for a child. When that is to happen, the child can find solace only on account of two facts is that his or her father fought a fight for worthy reasons and that, he fought as well as he could. Anything lesser, and it breaks the heart of the child and also his moral scale.
Nobility isn't about claiming the space which is rightfully yours. It takes a kinder heart and more courage to give up your right for a larger good. It is a pity that we don't understand that and then, even when faced with the question of sharing five villages, we aren't ready to give up the space "equal to the point of the needle" as in Mahabharata. It's a pity and it is the moral dilemma of everyday life. We need to be very careful about the fight we pick, which is what moral strength, nobility is all about. This is not about being a doormat, this is about having confidence in your own being  and believing that every inch of land that you forgo doesn't make you a lesser man by a yard. It is about having the sagacity of soul to understand the implications of your action.
Becoming a father does many things to a man. It also 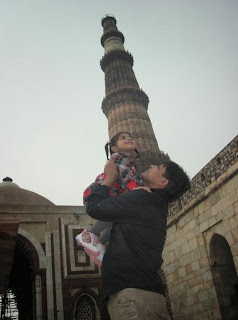 imposes on him several things. These are not societal imperatives- these are the imperatives of nature- the evolution of mankind. Each generation has the danger of falling into a bottom-less abyss of degeneration and at the same time, of rising to the enormous possibility of becoming a better man. Each man and woman, stand between the feral man and the evolved man, or superman as Nietzsche would call him. This is what a father teaches his offspring.

This is the morality for the progeny which is as important for a father to grow within himself as is for a mother to provide milk to the infant. Fatherhood is not an accident of nature, it is a responsibility of lifetime- And it is a lifetime which spans generations. Pope John XXIII summed it well when he said, "It is easy for a father to have children than for children to have a real father." It is for a father to teach the progeny that winning the fight is the least important of the things in the larger scheme of plan to be a better human being. Winning is in fact, the last in the order, falling way below that higher order responsibilities like choosing well the fights to enter into and fighting well the fights thus chosen. Our children learn many things we teach them, but we must remember, that they do learn many things which we do not teach them. We are living lessons to them. They may not follow what we tell them, but they invariably learn how we act. It is for us to decide what legacy we are going to leave them with.
It is for us to teach our kids nobility. Nobility is something which stands on balance between servile selflessness and arrogant selfishness. It doesn't give up on its own rights but refuses to stoop to the level of pettiness. It is not driven to action by a shaky sense of self, and is not driven to inaction by a sad sense of defeat. It is happy countenance, which answers to its own questions and smiles, without words, at questions which the world throws at you, demanding answers to define your self-worth. It won't be an easy task, but then it is erroneous to believe that fatherhood is supposed to be easy. It goes beyond taking kids to the movies. It is about teaching your kids to be better human beings- noble souls and better fathers when their times come. It is for us as father to become their moral compass and the northern star to the future voyages our progeny is going to undertake. It is not only houses and money that we leave to our sons and daughters; it is our thoughts, our measure of ethics and our sense of morality that we pass on to them. It is this legacy which is more important than any other material legacy, since it then carries beyond our kids and flows into the generations to follow. It teaches the real essence of nobility and civilization which as Goethe says," is an ongoing exercise in respect: for the divine, for the earth, for nature, for our own fellow man and for our dignity."

Paromita Bardoloi said…
What a lovely post! Loved it.God bless your child and your father daughter relationship. Power to you!
December 11, 2013 at 10:38 AM

Saket Suryesh said…
Thanks, Paromita for the visit and liking the post. We are all the time looking outwards trying to seek resolutions to the ills of the world, while the problem lies deep within, in what we become by brushing ourselves against the world which doesn't care about morality and nobility.
December 12, 2013 at 4:35 AM