The Tough Art of Apology 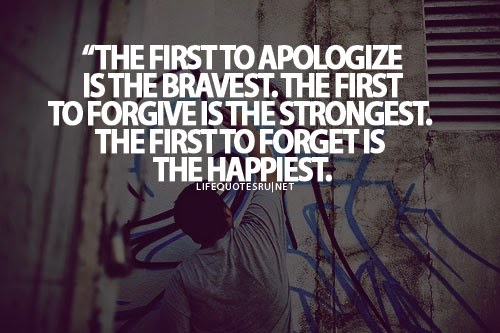 Courtesy Mark Twain, we know that forgiveness is the fragrance that the violet sheds on the feet which crushes it. Which is a lesson good learnt and easily executable. What is more complex, more difficult is the task of seeking apology.

It takes a great soul to forgive, but it takes a greater soul to seek apology. Even more complex is the task of seeking apology when none is necessary, even when logical. We do not seek apology to assuage the feelings of hurt party but very often to assuage our own ruffled soul, which stares at us with those innocent, unbelieving eyes. We surprise ourselves with our greatness many times. But as a contrary corollary, we also shock ourselves with shallowness of thought which we never thought we were capable of. We laugh empty laughs, discover flimsy reasons, and stay up for nights saddened of the evil we have perchance discovered in our own souls. Our sleeps are troubled and souls are fractured. Only merciful solution which can make us reach some solace is apology.

It is so difficult to apologize. It amounts to the admission of the fragility of our morality, admission of the presence of evil lurking from the dark corners of our mind. It is humiliating. But it is only liberation that we can hope for. Of course, the inner turmoil after an immediate moral slip will fade away with time. But it will require you to cultivate an duplicity of conscience to bear it for a time long enough for it to fade away. And that duplicity will haunt you for the rest of your life.

There could be other instance when you know for sure that you are a victim of interpretation and inherent dislike of your being as a person. In such cases your ego will stand in your way of apology. You are a victim of unreasonable evaluation of those who have, in any case, no assigned job to weigh you. But they do. I have written in many a blog posts that ignore those small souls whose only way to greatness is to shorten your stature. I am not going to deviate and ask you to apologize for something which isn't your fault. You ought not apologize to please those who seem to have been waiting for you to fall, so that they may pounce over you with a feral righteousness.

You ought to, however, apologize if you slip off your own measure. That could be even when you are not the reason for such a slip. It takes a grander, larger heart to apologize for things which you have no control over. Be clear in your mind, not to feel criminal or victim over the failure which was incidental.  Be very clear that your admission of failure does not offer the lesser soul an opportunity to pounce over your soul. Apologize for the act, not for the person you are. Apologize with a straight spine, for you are the brave, blessed child of God, who has both the nobility and courage to say sorry.

How to do it?
1. Plainly, without justification. Don't beat around the bush, just do it. Never ruin an apology with an excuse- Benjamin Franklin

2. Do it quickly. The more you delay it, the more the noise will be, the more it turns into personal affront, and more difficult it will become. This doesn't mean you do it in a rush, with a secret hope that no one hears you making it. Do it boldly, with serious intent, not shoot-and-scoot.

3. Taking responsibility. Standing ahead of a team to get credits of good work is so easy, taking charge and saying sorry for the failure of the team is so difficult. That is what leadership is all about, even when it is Robin Sharma's oft-quoted Leadership-without-Title.

4. Without shame: Don't let the apology haunt you for the life. That is the purpose of apology- to move ahead, to leave the past behind. That you could go beyond petty ego and cleaver justifications, makes you a nobler person. An apology doesn't define your relationship with the person in front of you, with yourself and with the world at large. An apology doesn't mean you need to remain apologetic for the rest of your like.

Remember, you are doing it for yourself and the fact that you are able to do it, makes you a better man.

Post-script: The post arises out of a sense of immense emancipation which I felt after writing in apology note to a customer, whose deliveries got delayed and who almost waited for the slip to happen. It was a disaster for sales people when your phones are always designed to send message of "I am in a meeting" simply because you have no answer and the other party has no respect for reason. I had no way to hasten the deliveries and I do not know I am forgiven. The best part is, I do not care anymore. I breathe a free man.