The Little Girl in Purple Dress.. 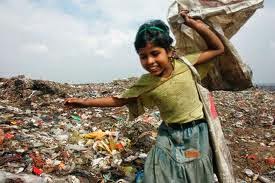 This is a terribly confused weather at this time in Delhi. The summers keep on attempting to make way into the scenario but are ousted by adamant rains twice every week. Last week saw one such rain lashing out on in its fury over the capital.


The following morning was blessed with the cold calm of dead devastation in the park, with fallen trees and broken branches. The jogging track was full of broken branches and dead leaves. A cold, encouraging wind saw people turning up in the neighborhood park. I finished my five-miles run which I was pretty happy and contended about, even going half a mile beyond the targeted five.


It isn’t an easy task from long out-of-activity body, but then, exercising at young age has probably helped. That and some hard-headed stubbornness of character. The tired heart leaps up and rises to the calling. I have to fool it at times in to believing that I will give up after two miles and then I cajole it to go another one mile and then another. I remember at one time I was even advised to stay away from direct gush of wind falling over my chest and was advised to climb not more than two steps of a stair at one go. From there, I slipped into a glorious decade of decadence and inactivity.


Running began in earnest about three months back and five miles a day run is quite satisfying in that regard. It is quite suitable for introvert writers, an aching knee notwithstanding. There is nobody to tell you how to do it right, quite a lonely and independent hobby running is and doesn’t need anything but a pair of god shoes and open space.( Read more on running here- My post on Running)


Last week also saw the last day of my daughter’s school. She carried a cake and chocolates to her class to celebrate an advance birthday. Her birthday falls in the summer vacations and therefore, she had to celebrate it beforehand in the school.


Well, coming back to the day in question, that is day before yesterday. I ran the full five and half and then settled on the bench as sweat poured over the back of my neck, and drops of sweat fell off my temple on the Earth. It is a moment of prayer to I don’t know whom. All I know is that a sense of sacredness descends, a cleansing of soul in the sweat happens in that moment. I sat there, soaking in the beauty of the morning.


There were kids collecting the fallen woods, for fuel. Yes, in the Delhi of 21st century, there is a people we refuse to acknowledge the existence of. They are the people who make this city, the roads, and the malls. The pungent air-conditions of swanky malls rarely carry the smell of sweat and sorrow of shanty roadside slums in which builders of this great city reside. They like in tents and cook like the ancients over the fire made up from woods.


She was a girl of ten or twelve, a thin embarrassed soul, not even aware of childhood which was passing her by. She looked at the joggers. I just noticed she gestured to couple of them beckoning them for some help. People merely ignored. They were there to nurture the body, not the soul. I took off the earpiece of my iPod and walked to her as she stood near the heap of wood tied in a red cloth. She, with deep sense of humiliation and embarrassment which poured from that little, impoverished face asked help without being able to speak. She needed help in lifting the wood she had collected. I lifted the wood, very heavy, even for me and together we tried to place it on the orange cloth she had placed over her head. I looked at her eyes as the heap got placed. A grateful pair of eyes, suddenly floated with tears. I couldn’t know why until I saw the orange head-cloth had slipped and the cruel, unshaped, uneven wood rested on her timid and naked head.
A wail rose from my heart, I do not know why as I cursed myself for not noticing it. I lifted the wood again and placed that head cloth. She smiled against the pain, which I could see still lingered. I know, soon she will get past that pain. I do not know how I will get past the pain. I come back and read newspaper. I read about the significance of girl child. I also read about the Right to Education and a plea lying in front of the highest court about the Nursery admissions in a modern, 21st century capital city.
I, with sadness and disgust, also read about the kidnapped girls in Africa. I think of the proxy birthday of my child and I think of a parallel universe in which that thin wood-picking girl in purple dress exists. I do wish my daughter to know about that parallel world, so she could do something about merging the two parallel universes. That girl in purple could have been my daughter. There is nothing which clears your mind better than pain. I know, what would be the best thing for me to do on my daughter’s birthday. To get books for that girl in purple, for nothing is going to liberate her than education.
Education needs to be rescued of the huge boundaries of schools. That is where emancipation lies. And about Boko Haram, well, I had once seen a pick-pocked beaten to smithereens at Mumbai Central railway station. They ought to be picked up from Africa and left at Mumbai central with someone’s wallet in their hand.
A Poem I wrote that day after coming back:
A Parallel Universe
In my world you celebrate
Your birthday, and we plan
A month in advance.
You wear lovely clothes;
Amused and in love
We, loving parents watch as if in a trance.
In a parallel world
You walk, carrying your
Impoverished self, collecting fallen wood.
Torn clothes, an already tired soul...
Barely celebrating a dreamless childhood.