The Anatomy of A College Reunion

September 16, 2014
"Every Parting gives a foretaste of death, every reunion a hint of resurrection" so said the great philosopher Arthur Schopenhauer. A journey filled with tearful departures- a string of them, begun from the engineering college, NIT Raipur, where I spent a great part of foundation on which my later life was to stand was made. That was the place where to put it poetically, we turned from tadpole to the butterfly, and to put it plainly, we turned from boys to men. This 13th, September, we had a reunion.

It was in Bhopal, for two reasons- one was logistical connectivity and secondly, the city somehow had the most enthusiastic lot, the lot which could protect their enthusiasm through the years of growing up and growing old. I wanted to go and was inclined but some I spoke to weren't much. Why should I go? who was I to meet? Is this whole exercise is to meet balding, graying men with slight paunch, like me, struggling to establish their own station in life and on some sorry occasions where meeting with old classmates turns into a shameful and embarrassing exercise of those you knew as loving friends, trying to establish their own successes in life with such obstinate absurdity that the exercise becomes sad and painful? But then a call from the friend came in and all the thoughts regarding the futility of such an event melted away. It was the same, hopeful sound with which I was so used to hearing twenty years back, the irreverent and affectionate sound of the name.

It was a long getaway for all married men, away from daily grind of marital bliss and family nuisance. We would once again call each other by first name, and once again the mist on the mirror will dissolve and show the face we once knew as ours. We are so wrong to believe that we go to reunions to meet old friends. We go for reunions to rediscover our own selves, to find the man that many loved. We are trying to find the man who we could tolerate and even love.

It is not to establish our success, it is to savor the sweet weaknesses of our souls and to meet those who softly will run their fingers over those cracks of personality, without the fear of them getting deepened into ugly wounds. It is to breathe once again the world, which did not want to improve you, make amends in your behavior, which loved you for what you were. The skins were thin, the masks, not yet arrived. It is to return to the times when handshakes had not yet replaced the bear hugs and love would flow without fear of formality. The morning Sun of greeted us with those friendly embrace which I knew would linger on for the rest of my life.

Reunion is also a moment for forgiveness to those who in past, somehow let us down. As time passes by, things fall in place and good is good but bad isn't as bad. A teacher who didn't grade well, a mate who stole love, an institution which threw us in the world unprepared to brave the storm. The past reconciles in the present and the future redeems the past. We lived, we survived and we flourished, and it is time to return and enter into the past with soft gratitude. In the past, we were the men, who had nothing and survived on hope and feeding on hopes, we marched into the world. We embrace and hold one another, and in silence, breathe the harsh growing up we had when apart and cherish the love which joined us in the past. The common sight of the glorious mining tower, visible from the dusty exit of the railway station, which stays with every alumni of that college in that sleepy town, the college, the Alma-mater which claimed not only those four years, but claimed a little bit of our selves which even today stays back there in those pastel colored walls of the hostels named alphabetically. As we spiritually touch each other, friends from another times, we touch those walls, our fingers running on those walls, and those tranquil, shadowy, peaceful wooden benches of the Hostel mess, where a Dayaram will bring food for our hungry souls, the blue walls with dark green curtains of the Indian Coffee House, in which I held those hands which would someday hand me little, pink future of mine, which now blabbers endlessly around me as I write this. We missed each other for such long, at times, it seems a miracle that we survived this long without one another. For our past connects us and in our past, we are what nature had made us. And not to forget what Emerson said about old friends, the ease of dropping the pretense and celebrating what we are- 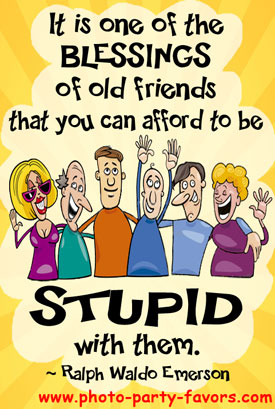