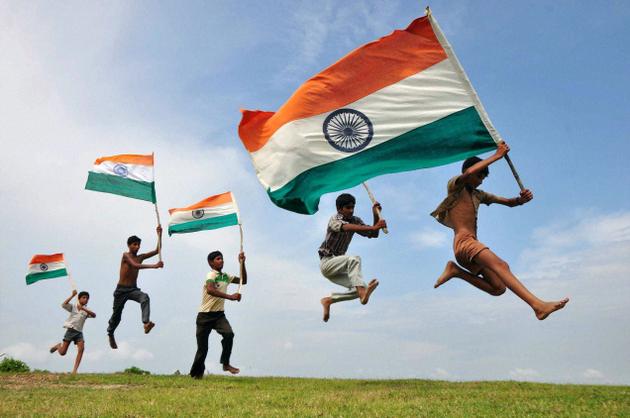 Patriotism is the flavor of the day. Social media is fun place- an amazing place to be a patriot. The time found between visits to Cafe Coffee Day and a well-stocked fridge with supply of beer on a dry day, a strong, eloquent vocabulary makes a good post on Independence Day.

The ease of endorsement has made everything much commonplace as well. Many times I post a blog and in a split-second, I get a favorite. It is obvious that the post has not been read. I do not mind it much. It expands the reach of the post. Getting followers on a platform like Twitter is some kind of crazy algorithm and we have experts called SEO experts and Social Media Experts who understand that. But for a person to begin believing himself, or herself beyond what one is really stupid.

There is a Twitter celebrity, who at first tweet of opposition, retorts with 'Moron'. His arguments begins and ends with the word. Insult is his chosen form of debate and his followers bend down in musical symphony, awed by the tantrums of the enfant terrible. We are moving swiftly into a society which has neither the patience nor the maturity to enter into a deliberation or a debate.

Then there are others who are enamored by patriotism as they know it. Patriotism to them is people fighting war at the borders, the blood flowing, men wreathing under pain, brave men, men like God, men beyond other lesser mortals. There eloquence, their love for uniformed soldier is much like Raina Petkoff's search for Sergius Saranoff, when what we truly have are soldiers like Captain Bluntschuli of "Arms and The Man" of George Barnard Shaw. I trust, that book must be made a mandatory reading for the young men and women. Sergius Saranoff is a lofty imaginary soldier, flawed at heart, Captt. Bluntschli is the representative of real men who man the army, irrespective of the flags they fight for.

The deification of the soldier is the biggest disservice we do to the soldiers. We look at them as toys to please our idea of patriotism. They are not. They are men and women like us. They have similar glories and similar failings wrapped into their personas. They are ordinary people tasked with extraordinary responsibilities. It is flawed to believe otherwise. This flawed imagination of a soldier as a solitary warrior, who welcomes death leads to our lack of consideration of a soldier's life. He, at the lower levels ends of being a fodder of political designs and at a higher levels, die a lonely death offering leverage to his political masters. Indira Gandhi gets the glory of the soldiers dying at the border and Sam Manekshaw's bold strategy. In the end, Congress heaps glory over itself for winning 1971 war and the old Field Marshal dies his death, attended not even by the Defense Minister.

Soldiers are much like us, living a life much difficult than us. They have their families. They are not romantic, lonely warriors of the myths. They are real people, who need to send Money orders back home to old parents. They are real people whose kids are uprooted every other year, parents whose hearts know that their kids will never have the friends of common childhood to see them through the life. Fauzi kids are outgoing, but do they have a choice otherwise. They need to be, when every year, you have new friends, new teachers. They are husbands who would also want to go watch movies in cozy PVR's of the world with their wives and families, but who instead end up watching movie through the rains in open air theater of Hasimara, bad prints, old, timed movies, two days of the week, repeat shows in the evening. His family will go out for shopping to nearest market an hour away by bus, with rationed hours- once a week. They have dreams like every one, feelings like everyone else and they put their lives on line for people like you and me.

They do not live in stories. They are much alive. They watch in desperation, tied by discipline when the country which they are protecting is thrown under an emergency to please a mother-son duo. The disappointed soldier will then write a little poem and hide it in his trunk. The poem's heading will read, "I am a chained soldier of an independent nation". He is chained not only to the rules, but also to the glorious image we build for him, while we fool him into fighting for us. We never rise up asking for a role in lawmaking for kin of a soldier, but well, we will ask for a parliamentary nomination for the wife of a terrorist and make a movie on the sister of a terrorist. They are living people who watch helplessly as the lands back home to which they dream every night of retiring to, surrendering the false aura of extraordinary, gets split and distributed among siblings back home. He fights, watches over the fences as his land, gets slipped like water through the palms every passing day and as he approaches the time when he will be forced to retire, right in the prime of his employ-ability. Out of favors, he will be thrown back to the dusty lanes of his world, the world from where he came from. Initial welcome fades away as people back home had already written him off to a grand glory. Suspicion and fears creep in- Will he want his share in the inheritance. Everyone will go about his job, and this man in thirties is sitting at home, searching for his place in a hostile world.

Ladies with lavish words, a soldier is much beyond the understanding of your years and your words. He is a human being. He takes care of you when he can. The nation needs to rise to take care of him, when he is no longer your best fighting machine. He needs you love more than your adulation. That is what OROP is all about. It is less about money, it is about the acceptance of a retired soldier into the society. It is therefore not about timelines. Soldiers at protest are not like bank employees closing the banks as a strike demanding the pay-rise every now and then. We get hurt when they do and we respond with alacrity. A retired soldier, does not impact our lives and we cynically look at them, in the knowledge that a serving one will never protest and a non-serving one will never matter.  While the PM has done his bit by reaffirming his commitment to OROP. Also correct is the fact that if something could not happen for 60 years, a committed government seeking couple of years should be acceptable. What is not acceptable is the manner in which Delhi Police acted, and that Government did nothing to distance itself from the way Police acted. They could have apologized, admonished the police for high-handedness. It is not absurd to claim that all uniforms are not equal. I have seen in Jammu, one side of the road, Police guarding the civilians and another army guarding Army habitation. The police guards, sitting on the chair, shirts out, buttons opened- the other side, properly uniformed, straight, stern and ready. There is a difference. It ought to be respected.

We then post a glorious thought on twitter and amid kudos, post another patronizing tweet chiding soldiers to not lose their decency. We will not tell the politicians to not to lose their decency. They are still relevant, a retired soldier is not. We change the profile picture with a tricolor and claim our piece in the world of patriots. Wishing you all a happy Independence day and  requesting a thought for our soldiers, a real thought, non-patronizing, non-glorifying thought of soldiers as our brothers, guarding our fences. They are not unthinking, unfeeling numbers. Let us tell government that we can suffer a little on trade with the neighboring country, but we cannot talk to people who behead our soldiers, that is betrayal.

My perspective on a Soldier's Thought through a Story written on StoryStar, The Death of A Soldier, Now posted on my Blog as well (Blog Link of the Story)