A Silent Tribute to A Young Death - Sujith- the RSS Guy 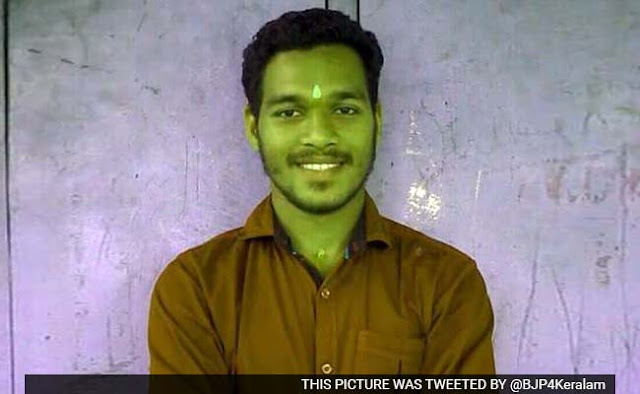 They say death is a great equalizer. The oppressor, the oppressed, the rich and the poor, the privileged and the deprived, the atheist and the fanatic, the prince and the pauper are all equal in death. They lie. They are wrong. All people are not equal in death. Death is as unequal as is life and as monstrously cruel.

How we are treated in death is defined by the people we leave behind. We are quite helpless in our posthumous passivity. It is also defined by how we have lived. If we have mattered to people as name and person or only as number. What is our identity in death, numerical reality or philosophical rallying point? Many things define where we find ourselves when the cruel chariot of death has run over the fragrant floral lives and the dust settles down, giving way to the stench of dead body.

From a very philosophical value, each life matters a universe in value, from a very cynical, realistic and analytic value, the quantum of loss out of any death will be defined by the length of life lived before fate strikes us with the ultimate eventuality. Some deaths will draw people on the streets, will bring outrage, bring out Tee – Shirts, even some jostling and police remands can do that. A logical view would place more disgust on an unsought death, I would say. A death sought for, by the person, a suicide, talks about a person’s surrender.

We can always make political points, as to how for one reason or other, a person gets pushed to a breaking point where he decides to take away his own life. But then, it is a very complex territory. Beyond rhetoric, and vile designs of politicians like the one who believed in liberty through her own statues, in a democratic nation, one can never know what could be the last straw, the breaking point. How could anyone judge? How was the teacher, the institute to know that a fiery student leader, Rohith Vemula will not be able to handle his rustication and respond with taking away his own life? He could have been sturdier, dropped out, emerged as a political force, baptized by fire, wrote like Carl Sagan and become a thought leader or he could have been even more delicate and killed himself at a scolding. There is no way of knowing that.

There is also no way of knowing why he killed himself. Was it rustication, hundreds of students get rusticated, suspended? Was it because he felt hopeless in the politics of the nation, in high sounding ex-JNU Sitaram Yechuri who wanted Dalits to have reserved seats in private enterprise, irrespective of merit, but was not able to find a dalit meritorious enough to fit into the Politbureau. It could have even been his internal conflict being a proclaimed Dalit cause leader, and his internal awareness of not being a Dalit from his father’s side. Could that not have been a discomforting thought that his mother pawned her to a cause, he never thought he belonged to, and he never thought he needed anything but merit to be valued for what he was?

But the same politicians, who could not use him in life, are using him in death. But that is Rohith Vemula’s story. It is the story of a young man disenchanted by the world around him which refused to treat him as a person and insisted on tagging him to a cause, he did not feel he belonged to. But this post is not about the man who decided he did not want to live, did not want to belong to a cause he did not identify with.

There was about the same time a young 27 year old man in Kannur, Kerala, further down south. His name was Sujith PV. He was a man with an infectious smile. His picture has a neat looking man, with vermilion on his forehead. He is killed. He has no hand in his own death, even if prompted by state, or government, or political adversaries. His death was brought up on him. On February, the 16th, he was killed, hacked to death, in night at 11:30. The night had fell and Gods had also gone to sleep in God’s own country. He was up, a young man, religious, I’d believe, being from RSS. The man was not pushed into committing suicide by adversaries who did not know what amount of persuasion might cause his death. Unlike Rohith Vemula, PV Sujith’s adversaries did not need to know, if what they were doing that morning in Kannur in Kerala was going to kill him. Rohith Vemula’s adversaries, if at all, wanted him to be muted. PV Sujith’s adversaries wanted him to be dead. Their intent was clear, there actions were clear. So they forced their way into his house and hacked him with sword. Those who hacked him belong to same thoughts which is represented by the leaders crying hoarse on suicide of Rohith Vemula.

Rohith Vemula and Sujith PV are not equal in death. Liberals will argue that Sujith represented RSS and then the story will go to how he belonged to the ‘fanatic’ Hindu thoughts, or fringe goons as media loves to call them, thus in some convoluted way, deserved his sorry end. In the middle of searching the reports on this gruesome killing, I looked at report. Firstpost has three lines, where they merely quote BJP local leaders pointing to the contrast regarding JNU students and Sujith, who merely had a view dissenting to the liberal intellectuals. Trust that annoyed them, or the fact that possible his English was not good enough for them. Even those he thought he stood for seem embarrassed about him, forget any DU professor coming forward to adopt him like the one who wrote an editorial in leading daily about Umar Khalid, the man who has been booked for allegedly calling for the destruction of the country. We are a nation of blind people and our vision is steered and controlled by the media. Which is a shame. We hear what we are told, we see what we are shown, we think what we are told to think. Even BJP, will not call for a debate in parliament on this. If central leadership of BJP brought about death of Rohith Vemula, which undisputedly is a suicide, why the central leadership of CPI-M not be questioned for what allegedly resulted in their local cadres indulging in what is undisputedly a murder, a cold-blooded gruesome murder. They say the heaviest burden for a father to carry is the dead body of his own child. Sujith’s father even saw his child becoming a dead body, right in front of him. To see the strapping young man with eyes with a smile, beautifully congruent with his mouth, the same man he would have twenty seven years back held in his arms as a little child, lay bleeding, slowly succumbing to a ruthless, grotesque death. It must have been horrible, and his father would himself prayed for his own son a comfort which only death might offer as he would have fallen their bleeding into death, bit by bit, breath by breath. He would have pleaded to his father with those eyes which held dreams of every young man and a hope, and a choke would have become a vomit in his father’s throat.

For a month or so, newspapers were full of editorial and letters on Rohith Vemula, with politicians of all hues, including CM of Delhi, who has nothing to do with Hyderabad, or University or Rohith, making beeline to Hyderabad. In contrast, all we have for Sujith is reports. None of the reports even pretend to be obliquely lament his death. No one loves Sujith, but no one even feels sad about death of a young man, at least on the group we usually consider to be national conscience keepers, the Rajdeep Sirdesais and Barkha Dutt’s of the world. No editorials for him. The web of conspiracy, floating amid devious noise and conspiratorial silence is now blatant. The reports with a calm conscience mention three decade of rivalry between BJP and CPI-M in the state, setting some kind of context as if by joining the rightist ideology in a leftist state he was almost asking for an early death.

Those aghast at violence against students of JNU in courts (they call beating up by unruly lawyers as worst violence nation has witnessed), do not even raise a murmur on the killing in Kerala. Their hearts melt, their collective outrage sours to darken the Sun for pushing and shoving in Delhi, but they sit in their wise stony silences on Sujith. Most reports are remorseless, with allusion to traditional rivalry between RSS and CPI-M in Kerala, suggesting the inevitability and therefore the reasonableness of the killing. I am not an RSS man, nor a Bhakt. I am a common man, a father. I do not want to adopt Sujith like the DU professor, I believe it is hyperbolic to the extent of being ridiculous. But I would have loved Sujith to live with the father he had.

If some gory act has caused his death, I want us to sit for a moment in silence, since no one in paid media will pay even a silent tribute to a life cut short so abruptly. Let us pray for Sujith, even if we cannot bring out rallies for him, print T-Shirts with “Mera Saathi Sujith” or write editorials for him in flowery English (even if we do, who will publish, priests and priestesses of public media would not let it), let us at least pray for him in silence. Even the leaders from his leanings will not cry for him in parliament, his parents will never get to rub shoulders with BJP top leaders, forget the opposition, we must keep Sujith in thoughts. To my mind his death, in its isolation, its silent pride, is more shattering than Rohith’s and demonstrates failure of state more strongly than lawyer’s attack on Kanhaiyya. Only thing it could possible compare with will be Dadri Lynching but then the response to that makes the apathy of state and citizen alike, makes it even more pronounce, in terms of outrage, compensation and corrective steps. All deaths are not equal. We do not mourn all the dead equally nor outrage about them equally. We lose moral right to complain when we are not mourned in our own deaths. We cultivate biased grief. Pretense neutrality can only take us this far and then it falls with a total collapse and loss of morality.

This post is a tribute to the sad killing of a young man, abandoned equally by his supporters and opponents in his death.