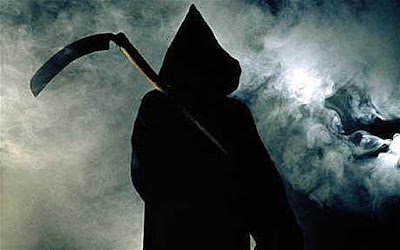 I write this post, sitting in a muddle of thoughts. There are times when one isn't sure what one wants to write about. Life is happening, suddenly the Earth rotates too fast for sanity.

A festival, a funeral, too many people. Good people, dressed in good clothes move about. A music plays. The tempo rises, and rises until it reaches a crescendo. Palms to the ears, a military band, the sound crushes the soul, and all that was soft, hopeful and fantastical lie about the life, dies. All that remains is the cynical, uncaring truth.

And suddenly, it comes to a halt. From behind the silken curtains, a face lurks- Death looks at life. Cruel and smiling, a spine-shuddering cruel smile plays on his lips. The music now is sad, and a smell of death floats in the air. A friend looks at me, his face ashen, his smile broken. Till yesterday, his soul was younger than me, suddenly, in him, I find, sages from the past centuries. A moment is all it takes from a young soul to turn old, and then ancient; for a man, overflowing with life to turn into a dead lake with the cracks of a thirsty Lands, on its dry surface.

We do not know when our moment will come, and our lakes will dry up. But it will happen suddenly, whether it happens today, or it happens many years hence. That is how death happens. It strives on suddenness. Life is sublime. It happens, we seldom notice it. It slowly arrives, months of wait, and it slowly flows. It flows so slow, we start believing it to be permanent, like a huge ocean with no ends in sight. As if no ends to it exists. When death arrives, with its coquettish arrogance, to flirt with our souls, it pierces through our senses. We sit back and take note, and cry and tighten our lips to bear it. Our palms cuddle into a fist, until it opens again, in a surrender of the spirits. It lingers and lurks from behind the curtains and awaits its moment. We are dying every minute while we are living.

Death is not just, like any other forces of nature. It has no mind of its own. It is as arbitrary as life is. As Ghalib, aghast at friends dying, leaving him, one after another, wrote,

(the Horse of my Life gallops in its flow, Let's see, where it halts; Neither is my hand on the reins, nor have I my feet in the stirrup)

Ghalib says so misleading is our appearance that we are in control of our lives. While we sit on the saddle, we have no control over it. It moves with its own wishes and it halts, where it wants to. A friend is dying. In the death of every friend, I die a bit, until there is nothing left to die.

"Die at the right time." Says Nietzsche's Zarathustra. And he laments, "Many die too late, and some die too early."

He is dying too early. What are we to say, who hears us, we -the mere mortals. Death defines us, it calls us, Mortals, dismissively, deriding. We search meaning in what we leave behind as we walk into the oblivion, into nothingness. A thin smoke rises from the charred soul, heavenwards and loses itself in the air. Then, there is nothingness. We don't know about afterlife. We don't know if it was only to fool ourselve. Our sense of self-importance cannot accept, our eventual end into a nothingness. As if we never existed. We build our after-life during our lives. As Nietzsche would say- A goal and an heir. I would add, in love and memories. But the end and the nothingness, is inescapable. The silence, a fleeting silence, not even a speck on the continuum of millenniums stitched onto one another; and the music rises again, again to a crescendo. It repeats itself in cycles. We sit down in memories, memories fade. We prepare for our deaths, old, middle-aged men, slowly floating through our solemn silences, memories of lost friends surrounding us, appearing and disappearing like faces painted in smoke.

Markus Zusak writes in The Book Thief, "Even Death has a heart." And when Death take, Rudy Steiner, the boy with Orange hairs away, even he is heart-broken and says, "He does something to me, every time. It's his only detriment. He steps on my heart. He makes me cry."  I am sure, if Death had a heart, and he could cry, He would cry today for my friend as well, who soul is no less pure and loving than that of Rudy Steiner.