Why PM Modi's TownHall is Path-Breaking? 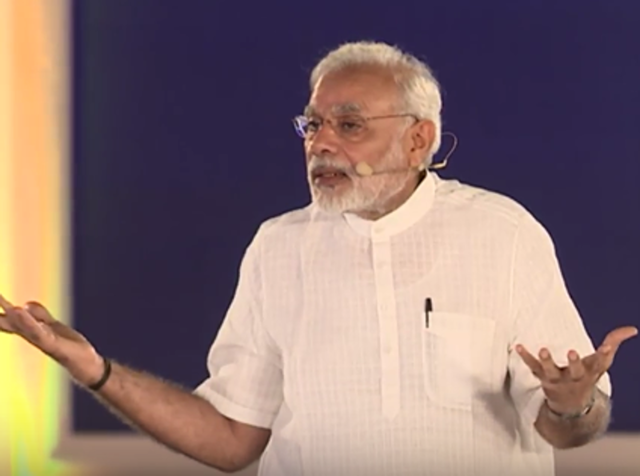 There are certain acts which are more important for the intent than for the content. "I had a dream" of Dr. Martin Luther King, might not have a blue-print a plan for liberation of the down-trodden in the American society, but the intent was so strong, so potent that the content was sure to follow.

Yesterday's Townhall by PM Narandra Modi is one such event in the Indian politics. I am not sure if PM himself realizes that. He has set in motion the wheels of democracy in a direction which going forward, has the potential to create something bigger than he is.

In one swift stroke, he has established direct connect with the citizens. When was the last time we saw the PM talking directly to the citizens? Let us look at what this Townhall does to the polity at a broader level, instead of trying to lazily assess Modi's body-language and analyse his dress for the occasion.

One, he allows questions to come from citizens. He chooses to answer. In an era, where we have cash for votes and where we have dubious Cash for questions in the parliament, this is a great step. We cannot wait to reach to our representatives and then wait in humility to raise the issue of bridges not built, schools not functioning and doctors not being available, while they are busy turning up for sessions in parliament drunk and when sober, filming the security set of the Parliament. We know where the buck stops, and we can reach that very place and ask questions. He has set a wheel of accountability in motion in our democracy, which can not be reversed, unless we are too stupid and those driven by agendas are too strong to make us forget this moment. I have a feeling that this will be asked from all future leaders. Forget the PM, even the Vice-president of opposition parties with 44 or 4 seats have never had the courage or humility to stand before audience and answer the question from the citizens.

Secondly, he eliminates the middle-man. He does not talk at you, he talks to you. Last time, the previous PM wanted to reach out to the people, he would call the journalists to his home for a luncheon. So these reporters-turned-journalists-turned- opinion-makers- turned-lobbyists, will decide what questions were most important for the unwashed natives and take them to the power that be. The anticipating masses will wait outside for the next- days newspaper, or the evening TV exclusives to know what concerns have been raised and how they had been addressed. This kept the intellectual priesthood flourishing and the citizen out of the process. How much a Karan Thapar would be worried about Dalits and tribals is anyone's guess if one has seen the huge, huge bungalow he lives in, irrespective of what he writes in his columns? These meetings were affirmation of the position of journalists in the natural order of things. This is one reason why they hate Modi. He is reaching out to the people and making them redundant. They do not hate me and you, or the questions we ask, they hate the act of our asking the question. It is not the merit of our questions which bothers them, it is our status as the questioner which agitates our intellectuals.

Thirdly, Modi brings forthrightness back into the political game. He does not shy away from the questions. This could be because he knows for sure his constituency. No matter what we pretend to be, with fresh slogans talking about Hindutva ki Talvaar (Sword of Hinduism), Hinduism is one religion which is inwardly directed. In Hinduism, there was always a separation of State and the Church, the basic premise of secular polity. The king was not the source of religious legitimacy, it rested with the sages from ancient times, who lived in totally isolated from political power. He is asked about Cow Vigilantes, and he minces no words. He is not liking the fact, hooliganism is covered with Cow protection. In Ramayana, when Valmiki's Ashram is attacked, he by all implications, runs a huge Ashram with a lot of students and trained on various things which I would presume also include martial arts. But he does not raise his own students to arms, he reaches to the King Dashrath, for a legitimate action on the Asuras. This has two messages, one illegal action on illegal act doesn't become legal by the noble motives it carry. Secondly, for the liberals, it also tells that when you tend to offend the faith of not only other religion, rather the human faith, by killing living animals, enjoying their flesh as a proof of your emancipation, you are become Asuras or devils. So while Modi has spoken on the vigilantes, next time when you dance around celebrating beef festivals, remember to keep your receipts or be ready to be jailed, for you are being Asuras. There can be no alternative reading to exonerate you.

The responses to Modi's stiff and open response, also makes few things about his followers very clear. One, the power of Modi comes from followers who are not fanatics. This gives him room to operate, to govern. Had he been a member of any other religion, as open in his religious beliefs as he is, he could not have gone unpunished, for such a response, where he essentially enforces the supremacy of the constitution and the law of the land over self-appointed vigilantes, even if latter runs under the pretext of protecting religion. It brings home the point that irrespective of best attempts fake moral righteousness of people trying to strive a balance with fanaticism and religious terrorism, Hinduism and intolerance is incongruous and impossible.  His response, and support affirms Hinduism as apolitical and tolerant religion. It also illustrates the lack of imagination of the so-called intellectuals, who sat on thrones because they held the ink and the paper captive, when they derided Modi supporters as Bhakts. Modi supporters have been most neutral supporters and most fearless in opposing the Modi government, if one compares them with the supporters of any other political parties. The question on Cow Vigilantes was asked by Chhabi, a vocal Modi supporter. Can you imagine a Laloo Yadav supporter asking him about the perils of casteist politics with reference to the development, and the supporters of Owaisi on the ghettoisation of Muslims, and about why should Muslims not be an equal citizen with common civil code- on a public platform? I don't know if many would remember the spokesperson of AAP, supposedly representative of common people, on a news-channel, stating- "You cannot question Arvind Kejriwal. We have got 67 out of 70 seats in Delhi" (this 67 out of 70 is a part of all their arguments). This exposes the fact that when the media derides their own viewer (or consumer of news) thus customers, as Bhakts, they are not being objective, they are merely being arrogant and insulting.

This is a major step in our democracy. We are moving from elite governance to mass governance, and thank you Mr. Modi for this. This step is historic and cannot be redone. Let's do more of it, maybe at least a quarterly Q&A with the PM, for this government and for the governments to come. George Barnard Shaw said, "Democracy is the device which ensures that we shall be governed no better than we deserve." Let us raise ourselves, it is the week of Independence day. Let us raise the level of our questioning, let us raise the level of our governance. We cannot leave this in the hands of those who for long have kept the public intellectual mind as their captive tool by holding the tight grip over public discourse.

My other posts on similar subject: