A Husband's Views On Karvachauth 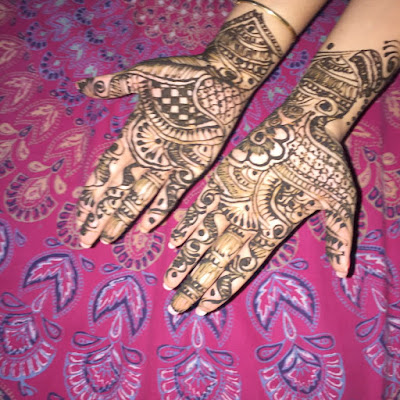 Today is the day of Indian, or should I say, Hindu festival of Karvachauth, much popularized by Bollywood. Initially a festival of Northern India, now it is widely celebrated. The festival is primarily of a day of fasting, observed by married women, praying for the long life of their husbands. As is the practice, the festival is marked by severe criticism every year by over-jealous atheists, fanatic feminists and bigoted secularist, who claim that the festival is patriarchal, regressive and anti-woman. If one considers those rants to be true, one would believe that there is huge amount of physical and emotional trauma that womenfolk are subjected to, in order to get them around to fast on the day.  However, if one were to visit any of the markets in Delhi, the scenario is quite contrary. You will find happy, joyous women on the streets of Delhi, excitedly visiting beauty parlors, with their husbands dragged themselves behind them, holding the kids as wife gets Mehandi to her hands- docile, bored, humbled and grateful at being granted additional lease of life by virtue of their wives abandoning food for a day. It, by any measure, is not a patriarchal event, it is a women’s festival, by the women, of the women.

There are Twitter handles, strangely, of women, downright abusive to women observing the fast. Those are mostly the people who have truly understood what Voltaire wrote about Hindus as being so soft that they are almost incapable of defending themselves. The tradition of Hindu men and women makes a good podium for them to trample and stand over, in order to seem intellectually taller. An RJ on the new ‘love’ radio FM channel, 104.6 was running interview of random people who on air, were telling how it is impossible for them to stay hungry for love. Instead, RJ Jassi suggested how they were willing to undertake much higher degrees of sacrifices for love than staying hungry. She contended that those people on air were ready to undertake ‘severe’ sacrifices like one guy who agrees to accept a pet, if his girlfriend wants, another girl agrees to ‘accommodate’ her in-laws, if her man wanted her. All for love. I felt so glad that I come from another generation.

This is a generation that is so self-centered and incapable of any sense of gratitude. Any half-educated man and woman would pity the idea of sacrifice that these cosmopolitan boys and girls hold. Their idea of poetry is Archies cards and their idea of sacrifice is accommodating a pet animal. It is sad and depressing. As we go about killing faith, killing tradition, killing the spirit of India, we are further encouraging the decline of human sensitivity in our society. It is not about religion. Karvachauth is a day of fasting which symbolizes the year of sacrifices which builds marital relationships in India societies. It is this faith which makes divorces rare and continuity of relationship usual in our society. In some region, we have Teej, another we have Vad Savitiri, and in South, But Savitri. All these are based on stories which are not a part of Hindu scriptures. These all are based on the stories told from generation to generation, or folklores. These are celebrations which are the adopted by generations of Indians who find faith in them. It is absurdity to think that by negating such festivals you are coming out as a brave, progressive intellectual.

Furthermore, KarwaChauth is not Vedic, nor is it in Shastras. It is something of a thing of the people. It is a day of fun and frolic for women. Almost all married men I know, would rather if their wives did not keep this fast. It is essentially a woman affair, not patriarchal as people suggest. It is not the fast itself which is a sacrifice. It is a symbol and celebration of sacrifice, it is the representation of a faith.

Every relationship is built up over sacrifices. Every relation infringes on individual space. Every relation, therefore, is a conscious decision to forego that individual autonomy, for a relation which is dearer to us, than our freedom. Every relation is the chain we chose. It is not only snobbish, it is hypocritical and annoying to find faults and make fun of other people’s faith. Poets have celebrated sacrifice in love and we always appreciated it. The same people who go and watch and even claim weeping to prove their metro-sexuality during Shakespearean tragedies like Romeo and Juliet, question the faith of observing women. Some are even abusive to the women who observe Karvachauth. This is worst kind of hypocrisy and worst example of accommodating diverse faith.

It is not about the day. For me, it isn’t a day of sacrifice of food ending with sighting of moon (a bit similar to around fortnight of abstinence, a few days earlier which the progressive liberals would not dare to laugh at for the fear of backlash). It is remembering the sweaty, dusty summer day in 1994 when my wife now, held my palms hesitatingly for the first time, and as we, worriedly conceded our feelings to each other, from two different sides of social divide, and decided to sacrifice all we had and all we were, for being together; It is a remembrance of beginning of a life, in an unfeeling metropolis, thrown out of our respective homes; it is a homage of the sacrifice which she made as she walked into a home, which resembled anything but- a damp room, with a bed on the floor in an almost slum-like area of Delhi, at the beginning of the century. It is a homage to the sacrifices of the woman who sat alone in the year 2000, in the hospital that resembled death with its white, sanitized building, as her 28 year old husband struggled for life in the ICU after a terrible episode of heart attack, hastened probably by familial abandonment and too much of nicotine. It is for the woman who would ride crowded DTC buses to her office, while her husband waited to recover and get back to job. It is not a homage to the husband, it is a homage to the wife, to the steel-willed woman who held him up and years later handed him a soft pink Jasmine which was to grown into another woman someday. My wife doesn’t read blogs on internet, and possibly doesn’t have the time to vet the views of rebellious, shrill feminists.

She is a woman of her own mind, a feisty woman as they say, and we argue and we fight. But she is also the biblical woman who was made out of the spine of Adam and I am proud to say that she is my spine, she is the starch of my soul, which keeps my soul in shape. I had almost decided not to post it, but then I am posting this, in view of all the bile that is flowing degrading women who are observing this fast. I stand by my wife as she celebrates Karva Chauth and I will stand by her when she decides not to. I think it is absolutely unfair to laugh, at her faith, to denounce it and to not be proud of it. I might be making fun of her, but that is about me, this fast is about her. Karvachauth is about women, it is not about the men at all. We, men are accidental beneficiary, a benefit which could well be all fictitious. About whether there is any truth to the fact to the faith that it extends the husband’s life; well it is only as true as the Santa Claus of the Christmas, which is about to follow, and whose arrival from North Pole every mall in Delhi will celebrate, which every dissenting diva of Delhi will visit.

It is not about religion, you foolish intellectuals. It is about love. I only hope you had little faith. Not as much as me, but just a little to get on with your little lives. And I shall end this post with outstanding lines by John Keats: “

“I have been astonished that men could die martyrs
for their religion--
I have shuddered at it,
I shudder no more.
I could be martyred for my religion.
Love is my religion
and I could die for that.
I could die for you.
My Creed is Love and you are its only tenet.”

Karva Chauth is about such love. Hope people could understand. In the mean time, I stand by women who observe Karva Chauth and I stand with the women who don't, of their own volition.

Unknown said…
"I fELT so glad that i come from another generation"
I share d same feelins when i see this " yo yo bro" generation around.
I feel content to realize that sentiments r not so snobbish atleast for me.
Completely agree with ur views on karwa chouth being a festival to show mutual love n dedication for a married couple.
If i m keeping this fast for my dear darling he (is in Australia currently) too has set his alarm for 3am to ensure he is with me when moon appears.
These festivals brings a chance in married life to feel loved n pampered.
October 19, 2016 at 8:38 AM