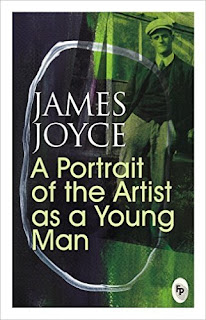 Some books are an act of education; they cannot be read in haste, cannot be understood in one read. James Joyce’s A Portrait of the Artist as a Young Man gives one such feeling.

It is a coming of age story of Stephen Dedalus. Nothing extraordinary about that. But then there a rich, slowly flowing lost river of philosophy which moves beneath the surface, turning an ordinary story of a boy growing up, encountering questions about faith, religion and sex, into an exceptional, extraordinary and engaging story. The story moves along the timeline, much in the manner of Virginia Woolf’s To the Lighthouse, where the writer is seemingly a passive narrator. Further, while this book is more of a philosophical essay wrapped around a story, Ms. Woolf’s book, on the other hand, is rather a Story primarily, with a philosophical touch. This book is blatantly philosophical, dwelling into the dangerous territory of religion and how a growing mind looks at God. It begins with his school, where young Stephen, like any other young kid is lost and unsure about most of the things about him and his own place with reference to the world around him.

The boy, Stephen Dedalus, a catholic, is a seeker of truth. The famous dictum of Socrates- A life unexamined is not worth living- notwithstanding, most of us pass through life in something of a drunken stupor. Some do however, ask question, and seek answers; the doubters, the naysayers. It is surely not an easy life. A philosopher like Socrates leaves us with the dictums and aphorisms, while a novelist like Joyce, wraps it into a delectable story of Stephen Dedalus. He is hounded by his question. It begins with child-like curiosity, and it is endearing, but his intent is not to establish the innocence of the child or to create empathy the Maugham did so masterfully in Of Human Bondage, where your heart breaks at the plight of Phillips as a little boy with club-foot in the school. Mr. Joyce is more in love with the theme then the characters which carry the theme. The writer shows such little love for the character that it becomes very difficult for the reader to be in love with them, even when you identify with them. Also, there is much little attention given to any other character apart from the main protagonist.  This is not to say that the writing is dry and drab. Rather, it is slow-winding, patience and poetic. That is why I love it, Hemingway always leaves me panting and gasping for breath with quick, short, sentences, one sentence almost chasing another. For me, it is Conrad, Woolf, Dostoevsky, where sentences float like Jasmines floating, rather levitating in slow, calm summer breeze. Mr. Joyce is up to my pace, diligently working on each sentence more like a poet than a prose writer. A great deal of action happens in the mind of Stephen, and interesting observations come our way, reminded me much of my own childhood thoughts about religion and God, always fraught with doubts.

Look at this beautiful paragraph from child Stephen’s thought-
He tried to think what a big thought that must be (universe), but he could only think of God. God was God’s name just as his name was Stephen. Dieu was the French for God and that was God’s name too; and when anyone prayed to God and said Dieu then God knew at once that it was a French person that was praying. But, though there were different names for God in all different languages in the world and God understood what all the people who prayed said in different languages, still God remained always the same God and God’s real name was God.

Thus beautifully is revealed the innocent mind of a child who is so trusting, so faithful and yet not a bigot or a fanatic. The boy has a mind which asks questions and is all set to eventually rebel, throwing away a career in religion and opting for be an Artist instead. Are the two different? Isn’t all art a search of truth? Isn’t all art another form of religion, another system of spirituality? Stephen has all the making of a writer. He is a perennial doubter, he has the capability to put himself outside the world, in which he himself is a player and look at it from a different vantage point, even as a very young man. See how beautifully Mr. Joyce establishes this as he writes-   ..they passed a jovial array of shops lit up and adorned for Christmas his mood of embittered silence did not leave him. The causes of his embitterment were many, remote or near. He was angry with himself for being young and prey of restless foolish impulses, angry also with the change of fortune which was reshaping the world about him into a vision of squalor and insincerity. Yet his anger lent nothing to the vision. He chronicled with patience what he saw, detaching himself from it and tasting its mortifying flavor in secret.

We find here a child who has an intellectually enlightened mind and a writer who is in his formative days. He loves Byron and would not abandon his hero in the face of physical abuse. Oh, this innocent love for written word is so charming. Sadly, few have patience and affection for such words in today’s world. I am one old-fashioned word-worshipper and I loved when Joyce beautifully explains the restlessness of Stephen as a young man wandering across the infamous streets to sin, as he felt some dark presence moving irresistibly upon him from the darkness, a presence subtle and murmurous as a flood filling him wholly with itself. Gorgeous prose there. I read an excerpt of One India Girl shared by someone on Twitter- a blatantly explicit scene-  which doesn’t charm, doesn’t even attempt to titillate; rather which leaves one’s senses numb, and mind confused as to why book like that is not categorized as adult book. In contrast, I would beg one attention to an intimate scene between young Stephen and a Prostitute and how the affair is depicted here,

With a sudden movement she bowed his head and joined her lips to his and he read the meaning of her movements in her frank uplifted eyes. It was too much for him. He closed his eyes, surrendering himself to her, body and mind, conscious of nothing in the world but the dark pressure of her softly parting lips. They pressed upon his brain as though they were the vehicle of a vague speech; and between them he felt an unknown and timid pressure, darker than the swoon of sin, softer than sound and odour.

I love such prose, such respect of words. If some would think that actions are not as poetic as represented in these words, I would suggest they ought to be. I have an ancient soul in me and I love such writing as against the blatant pornographically explicit writing passing off as mainstream literature today. If such writings is not widely accepted by people today, it shatters my optimism in the current and future generations. Words is what separates humans from other animals and we must preserve our respect for words. I do hope that if exposed to it, people will like it.

While the writings of Joyce, resemble closely to modernist writings of Ms. Woolf (latter found Joyce bore, sigh! Both wrote in similar modernistic style and hold your heart, both were born in the same year (1882) and both died in the same year (1941)) still in terms of the narrative that flows through the mind of the protagonist, it, in a way, also resembles Dostoevsky, whose stories grow in the minds of characters. Dostoevsky however goes much deeper into the minds of his characters- the feelings, the dilemmas, the agonie, while Mr. Joyce hovers a bit on the higher plane- at philosophical levels. That said, and also considering his odd design in terms of writing very unconventionally, for instance, Mr. Joyce does away with the inverted commas, the book makes an important reading for anyone who loves literature, for the sheer force of ideas which are packed in this simple story.  This is much easier to read, however, than, Ms. Woolf’s work, say for instance, The Waves (Read review here) but is also less engaging and charming than Ms. Woolf’s work. HG Wells, no great lover of Joyce, wrote in his early review of this book (March 7th, 1917, read New Atlantic Review here),
“Coarse, unfamiliar words are scattered about the book unpleasantly, but he adds, …even upon this unsavory aspect of Swift and himself, Mr. Joyce is suddenly illuminating. ..

The technique is fresh and new (or was at least, in 1917), writs Wells,… Mr. Joyce is bold experimentalist with paragraph and punctuations…He uses no inverted commas to mark the speech… The technique is startling but on the whole it succeeds..writes HG Wells. Read it for it carries a freshness of experience in terms of style and content. Read it if you love words exquisitely laid down adorn with some serious philosophy on questions of life, art and religion.