Demonatization - The Dignity of the Poor 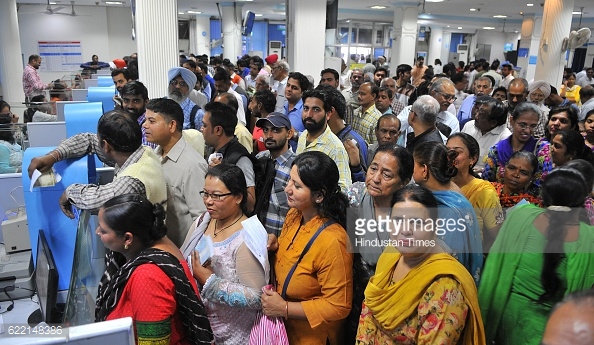 “I believe that man will not merely endure: he will prevail…The poet’s, the writer’s duty is to write these things. It is his privilege to help men endure by lifting his heart.”- William Falkner, Nobel acceptance speech, December, 10th, 1950

The moments of crisis brings out the best and worst of human spirits. Then there are moments which rewrite the course of a nation. For India, the wars of 62, 65 and 1971 were such moments, so was the Emergency imposed in the late seventies by the Congress government. When we look at those moments, we wade through the old, black and white pictures of those family photographs and wonder where our parents were when these events were unfolding. I am writing this on #Demonetization, which is one such historic event.

Before you sigh, roll your eyes upwards and throw your arms up in despair, and walk away, let me put forth the disclaimer. I am not an all knowing economist; I am also not an all-feeling journalist. I am the common man, who has stood his turn in the queues to exchange the currency and then to withdraw the money.

I write. I write poetry and fiction, mostly. But then why am I writing and further muddying the waters in which already too many people have stepped in. That is answered by Faulkner in his Noble Prize acceptance speech. I write on behalf of the poor man behind whose name every black money hoarding businessman, every corrupt politician, every tainted bureaucrat hides.

Tragic stories are floating in the market. But then, they are just being visible now. The poor man is confounded as rumors float. Some come and tell him that his zero-balance bank account will be acquired by the government, with all the money into it. But you stand in the queue and the anecdotal poor man is not complaining. He stands in silence, with great grace. He is the man who sends his son to army to stand guard on the Line of control. He is not a retired income-tax officer, nor will any senior Income Tax officer marry him. He is facing unprecedented hardships. He neither has resources nor inclination to visit exotic foreign location for introspection for months. Unlike a middle-aged man about to touch his fifties and still in search of his widely anticipated political mojo, he makes money each day and feeds his family.

He does not seek greatness. It is just logical. He understands that when things of this magnitude happen in a country of this magnitude, inconveniences will happen. He knows the inconvenience of processes first hand, much better than those who claim to represent him, when he had visited a government officer to get something as basic as a BPL card or a Ration card, and was asked to pay bribe in cash. This demonetization has discomforted that Babu. What is great about this drive is that it even hits those who charged in kind for making of a ration card. He laments that a child died because the parents could not pay in the new currency. But amid all the noise he understands that even without demonetization, that heartless hospital would have been turning away kids who had no currency at all. He understands that with this revolutionary effort, maybe, just maybe, cash will reach some hands, or better still, there will be some hospitals which will not need currency, new or old, to attend to a dying child.

There have been plenty of stories about maids. Once again, please don’t shut your laptop down so hard. The helps I had at home, both of them had the zero-balance account under the PM Jan-dhan scheme, but had never deposited any money. I asked them why. They had their fears. This is the basic of the worries, whatever might be. For long, we were under slavery. The government did not belong to the people. When the British left, white officers were replaced by brown baboos. Congress was a club of rich people and the Jawahar Lal Nehru, foreign educated, son of a rich lawyer of Allahabad became the first Prime minister, even when the appointed committee chose the one who began his political career from peasants’ movement in Bardoli. The voice of the people was vetoed and the man whose dad knew the founder of the new company called India, became the CEO.

The distrust to the government was thus perpetuated and a layered society was created as dynastic rule was legitimized, slowly but surely. It is this distrust which makes it difficult for the poor to bear the trouble of demonetization and its fall-out. It is truly to the credit of the PM that poor have not only been able to overcome this inherent distrust towards the government, the rulers; they have rather risen in his strongest support.

It has placed the opposition in a very difficult situation. They are out on the street protesting. Situation is very funny. The opposition is out protesting, supposedly on behalf of the poor, while those they claim to represent are protesting their protest.  Some politicians are so distraught by the loss of their personal, illegal wealth that they are unable to detect the disgust that their desperate dramas are creating in the minds of those they claim to be representing. This is not to say that there is no inconvenience. There is. Not everyone has means to do online commerce. Which is sad after almost seventy years of independence. But things are not as bad as the naysayer claim they are. Truth always lie somewhere in the middle of the extremes. True, fifty regrettable deaths have happened. Some out of those fifty (remember in a nation of 125 Crores), were later found to be unrelated to the government move (sample, someone died counting new currency notes, would she have not died if the notes she was counting were old currency? Or Newspapers reported someone died at the ATM in Mumbai, at a place where there was no ATM.). But consider the proportion. Only two months back, around the same number of people died and was in news. Only, the deaths were not spread across 125 Cr people, it was limited to the city of Delhi. And the CEO of Delhi, the Chief Minister, most incensed by this Anti- Black money move, submitted the courts that he had managed to spare only five minutes to spend in his office as the city reeled under epidemic. How seriously can one take his concerns?

The poor have been most decent and graceful under such testing times. The rich and affluent have been crying foul. The poor understand that the history is being made. And he wonders that some years down the line, the same question will be asked. Where were you when this historic fight against corruption and black money was initiated? Did you handle it with the quiet dignity and poise of the poor, or with the noisy, complaining arrogance of the affluent when the nation sought your support to create a better nation for future generations? Future will pose that existential question to all of us when the time comes- What did you do when your nation called you for your services? What did you do when for the first time the gulf of distrust between the government and its people, perforce was being filled, as an unnoticed fallout of an anti-corruption move? How did you respond when the economy was shaken and cashless and accountable business became the order of the day for the first time in the life of our nation? Did you welcome it as a mature citizen or you went down as a cribbing, complaining kid? I write not with data. I write as an ode to the poor man in the queue, I write to help him endure this moment by lifting his heart. Let us all do that.