Winters are Here- Notes from the Cold 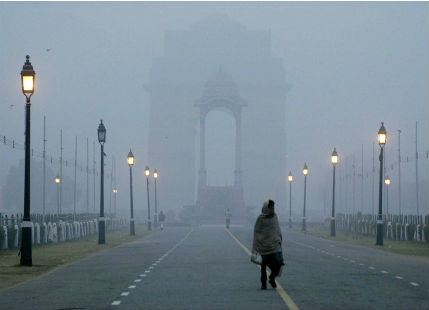 Winters are here. Not the devastating one which numbs one’s soul and drives deep into the body like the brutal edge of a knife piercing through a slab of ice, with wisps of smoke rising from it. Delhi, the city of extreme weathers, is not there yet. The evenings are cold, but bearable, the mornings are chilly, but welcoming. The war between the Sun and the winter continues. The Sun is brighter than the summer days, but not cruel. There is more brightness than the heat, like a strict disciplinarian father, observing his loveliest daughter, an Elizabeth Bennet to a Mr. Bennet. Winter, in Delhi, steps in slowly with unsure steps and once it finds the ground firm enough to bear its heavy steps, it stamps with the madness of a wild beast, as January brings in the New Year. The bright sunbeams of the initial days of splendid winter mornings dies, helpless in the face of a sudden vengeance of the grey winters descending from an unkind heaven- fog, mist, smog; its broken wings spread, decaying, dead remnants of a failed fight. The dense fog descends and the Earth is wrapped in the silences of the winters. It is devastating, yet beautiful; crushing to the soul, yet charming. Something like love with all its magic and madness. That is how my city walks towards the winters. Those who love outdoors and are weaker in spirits, despair; those with braver outlook, wade through the chilling yet mystical cover of the fog; writers and poets pull the curtains and in the warmth of a burning soul, read and write, half-lying in their couches, wrapped in furry blankets.

Those on the streets, struggle to steal some warmth- in tattered clothes, in shelters, demonstrating the failure of the collective to support their brethren. The homeless pulling their blankets over their heads on the streets, stand like a sore-thumb and ugly slogan of the heartlessness of their counterparts in the city, whose city they build- making flyovers, making Metro, derisively addressed as Biharis. The city dwellers consider them stupid. Yes, stupid they are to continually elect the governments in their own states which criminally neglected the governance, forcing this cold exile on them. The caste and religion which they follow while voting in their own cities and town, and elect incompetent and corrupt leaders, with the satisfaction of having stood by their religion and caste, dissolves under the giant wheels of a gargantuan city with the heart of stone, as they all merge into a common identity of migrants, huddled under the flyovers. Take that, Ashoka the Great of Patliputra, the city of refugees laughs at your people and washes its hands twice when it touches them accidentally. They shiver incessantly and humanity shivers with them like that lonely leaf on the twig, struggling a hostile weather, about to fall and die and decay without a moment’s notice.

The decaying, foul smell of mendacity rides on the evening winter winds as Champagne is poured into the glasses, and music flows against the clinking of crockery in the back drop of a benevolent idol of Santa riding his carriage smiling at a corner, welcoming the New Year. Nights come early and dark blanket envelopes the city as dead as its inhabitants.  The winters are here. The city, like every year, looks forward for a possibility of redemption or an even definite decay, in this season. Will the chill beat the warmth of human spirit or will the glow of human heart rise above the grey darkness of the numb, fogged senses? - is the question which every winter brings to this city. This city which died seven times to come back to life again awaits redemption. Will this city and the heart of it which pulsates in the some dark, cold corners, that red, organ of the size of a human fist, beating against the cold, survive the biting slaps of an impending winter?  As the season oscillates between beauty and bitterness, between sensuality and sadness, between magic and melancholy, I read, a Gustave Flaubert quote, "Are the days of the winter sunshine just as sad for you too? When it is misty, in the evenings, and I am out walking by myself, it seems to me that the rain is falling through my heart and causing it to crumble into ruins." and wonder if he was talking to me when he wrote that.

Unknown said…
Beautifully expressed the life cycle of Delhi's winter climate which in comparison to the human life cycle from infancy to old age. When it is tender, it is beautiful as the age progresses the tenderness, beauty fades away and the uglier truth of life confronts us.
December 24, 2016 at 1:06 AM