Book Review: Before We Visit the Goddess- By Chitra B Divakaruni 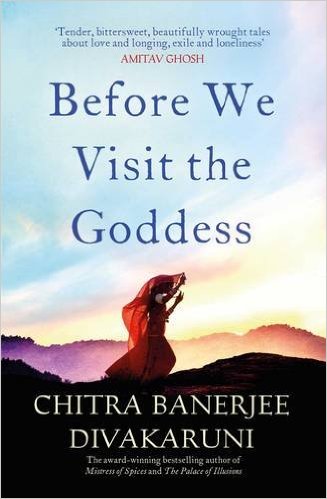 "As for my next book, I won't write it till it has grown heavy in my mind like a ripe pear; pendant, gravid, asking to be cut or it will fall."

Ms. Virginia Woolf famously wrote the above on how she decides on the time to start writing her new book. I do not know Chitra B. Divakaruni well enough to know if she waits to write before it grows heavy, asking to be cut or it will fall. But the succulent prose of her novel does suggest a very ripe and mature story. Before We Visit the Goddess is one rare book by a contemporary writer, mainstream writer, if I were to say, that I not only finished; I savored it and finished it with a sense of longing. The story is written with such affection that it shows.

Chitra comes out as a serious writer with deep affection to her story and sincere respect to her craft. The language is not lazy, and the emotions are never half-baked, it almost has the taste of a carefully cooked curry left to simmer overnight, rendered magical by the last breath of dying cinders. The prose is glorious, the story is charming. When was the last I came across a magical metaphor like The magician's eyes flit from side to side as though he were reading something very rapidly. Their whites are a pale yellow, the color of drowned sand at the bottom of a river. The author remains true to the story, thankfully. She is unhurried, honest to the story, not for once slipping into the typecast of modern Indian English writing. Modern English fiction writing broadly divides into two classes- Agenda-driven, Good language, but propagandist; and Lazy and soul-less, the chic-lit class of literature. This novel escapes both and shines in its own intrinsic radiance.

The Novel begins with Sabitri , the old grandmother writing to her grand-daughter, Tara, at the insistence of her daughter, Bela. They have never seen each other, never met and thus we meet the three heroines of the story- Tara, Sabitri and Bela. The story moves quickly from a village in Bengal, to Kolkata and eventually to America. The story is spread over great spread of geography and spans three generation (four if we count Durga who starts this slow and hesitant revolution). We don't actually know about Durga's thoughts about women emancipation but we do closely follow the other three women. Durga is able to put her daughter, Sabitri to college, with the help of a disinterested benefactor, Leelamoyi. But then nothing is rushed in this novel. The steps towards emancipation are light, the flights of freedom, faltering, and the voices of women mere whispers. The three women, of different times, different ages, enjoined by one thing that they have in common- being a woman.

The spread of story leaves some ends which probably author had tied up in her mind, but are hard to catch. For instance, what happens to the magician that Bella found in Assam? or what happens to Bijan? or the sudden changes in Tara on the visit of temple- whether it was on account of the story of the death of her Guest's daughter in India, or was it some divine intervention- is left to interpretation of the reader. Possibly it was meant to be thus. I do wish that it would have been nicer if some dimensions were given to Bijan. To be fair, she tried, when we have Sabitri meeting her old flame and getting caught red-handed, hitting at Bella and thus creating a fissure in the mother-daughter relation to be bridged only with the letters Sabitri wrote for her grand-daughter Tara, in her death. Through the intermingled lives of three independent-minded women, we trace the path to emancipation, realize the importance of independence. This is an amazing story. And the way in such a wide canvas, in such a complex backdrop, all ends are tied up neatly as the story comes to close, delicately, adroitly with red ribbons in the end, as words of the letter of Sabitri float in the air like some magical chants, glowing words floating through the dusk-
'Satisfaction overwhelmed me. This was something I had achieved by myself, without having to depend on anyone. No one could take that away. That's what I want for you, my Tara, my Bela. That's what it really means to be a fortunate lamp.'

My recommendation: Absolutely charming story, absolutely lovely read, especially for women of all ages, and if your are a man wanting to understand a women of any age.

July 21, 2021
For last week or so, New York Times has been desperately seeking first hand account of those who were in Inter-faith relations in India. A news medium is usually supposed to pursue the news, not create them. In this case, NYT first made up its mind that it needs to write on Inter-faith marriages in India and somehow create a narrative how poor and innocent Muslim men are falling prey to the belligerent, bigoted Hindus who are not allowing their women live with those they love. Having decided the line of argument, they set about creating the articles and two initial Essays have come up- Are You in an Interfaith Relationship in India? and another How New Laws Across India are Seeking to Ban All Interfaith Marriages ,  both published on the same day, linked to one another.  As they had put the cart before the horses, it is no wonder that the carriage tumbled the moment it started moving. Incidentally, it seems those who run things at New York Times that a spate of articles, suddenly comi
Post a Comment
Read more