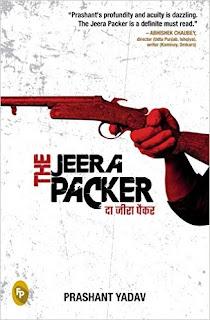 Disclosure 1: I had received this book as review copy.
Disclosure 2: I have rarely picked a new author's book for review and finished it.

I have my own apprehension in picking up contemporary writing. Being a writer, for me reading needs to either add to my missing education in literature or needs to have an exceptionally witty plot with serious efforts and respect for written words. Most contemporary work is either chic-lit, which leaves me fuming and with frustration, where the stature of the writer is totally erected on strength of a massive media and marketing campaign. My problem is when the content does not match to the huge build up created, leaves a serious reader, looking for some great content, some good story well-told, largely disappointed. On the other hand there are books which claim to be scathing, true story with macabre pictures of guns and dead bodies. Most such books, I have found, are weak on stories and strong on the message and propaganda.

The brief description of the book worried me. It is a story of an ex-assassin. It is a story rising out of bad, bloody land of UP, India's most populous state with almost the weakest policing and most morally deprived politics in the nation. It had everything that would worry me. It even had a gun on the cover. But then I picked the book and thank god I did. What a marvelous story it is and so well told! As luck would have it, I picked this book as elections were ongoing in the state. The story plays in the cris-cross of Politics, Crime and some bit of policing. This is the story of a man, a sharp shooter, two decades out of his prime, living the life of a married man, raising a son, running a grocery store with his wife, Jaya.

"The mass of men lead the life of quiet desperation." - Thoreau wrote in Walden. This is so true about most man, hit by middle age, struck in the conundrum of their non-nonsensical and inconsequential lives. You don't need to be a gifted sharpshooter, the protege of a local don to understand it. The monotony of middle age is something which will find echo in most men's life in today's world. Abdul, his friend from the earlier days, now happy being a mechanic with the promise of half a kilogram of meat for the family, nurses the dream of building the best bike, and driving all the way to Jamshedpur. A modest man with a small dream. To appreciate the significance of wind on the face while driving a bike, built on his own, is something that only men can understand. It is almost like parrot color dupatta for women which men can neither understand nor appreciate. A chance encounter with Lal Mani, his friend or rather lackey from the earlier times rubs in the unending ennui which the uneventful life of our hero has become, a has-been, who spends time packing Jeera, the condiment, in a one-of-the-many godowns in the city and wakes him up to the rude reality of time which had passed him by without making him any part in it, large or small. The existential search for the meaning of life sets him to plan for one last hit, big enough to be his masterpiece. I would not spoil it for the reader disclosing how he plans to do his big kills and whether he is able to successfully execute his last big project, his TajMahal. That is not important, the process of his waking up, the process of his search for the aim is important.

They say half of our life is about the search of legitimacy, the other half is about the search of legacy. The life which begins in blood has no hope or trace of legitimacy, legacy is what our hero is looking for here. The writer bases his story in UP and quite openly picks characters from the political world of UP. Krantikari Party, obtusely referring to family politics, under the garb of socialism, Dada, with his friend Chouhan, much like Amar Singh latter with great connects with moneybags are very easy for anyone to recognize if one follows UP politics. Then there is a Thakur don, with his alleged pond of crocodiles, housed in a Jail. The characters closely resembling real life political people, described too closely to miss the resemblance, makes the read even more enjoyable with believable characters. There is even a lady political opponent to Dada, and in the context of UP, we know who we are talking about.

The badlands of UP and Bihar, apart from the lawlessness, are also known for quirky metaphors. Nowhere else one would find such abundance of such brilliant metaphors as one would find in UP. While they are so attractive in the local language with the taste of the sand from the banks of Ganga as one plays with them in the mouth; it is very difficult to make them stand to their inherent brilliance any other language. The words, sharp and incisive, quickly turn insipid and uninspiring once translated. This goes to the credit of Prashant Yadav that he preserves the charm, the acerbic, yet attractive tinge of the language as he tells this story abundantly sprinkled with metaphors. You have the story flowing on the waves of such feisty quotes like "The whole point of becoming somebody is to change your brands." when our protagonist notices the cigarette brand of unworthy (as per him) Lalmani, now rich and powerful minister. Or at another place, he describes the mental state of the Hero, where he writes "My mind spins like camphor in a bowl of water."  Words and rustic smell of local lingo does not obstruct the story, rather it propels. The writing is smart at some places, witty and satirical at most places (for instance when Ventilator Baba (let the name sink in) advises the CM to sacrifice a goat, since latter cannot do a Hindu ceremony given the elections which were near or references to vote bank and special schemes for vote bank) and holds your attention all the way long. My only quarrel with the writer would be two sexually explicit scenes in the story which to me seem to add less or nothing to story and stand like sore thumb. I feel they are there because they fit in the formula of contemporary writing, and attracts the young (possibly). That apart this is a thoroughly enjoyable read and considering that this was probably first book by the writer, having read this, one would look for future writings of Prashant Yadav.