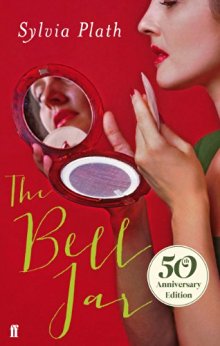 
"Doctor Gordon's waiting room was hushed and beige. The walls were beige, and the carpets were beige, and the upholstered chairs and sofas were beige. There were no mirrors or pictures, only certificates from different medical schools, with Doctor Gordon;s name in Latin, hung about the walls. Pale green loopy ferns and spiked leaves of a much darker green filled the ceramic pots on the end-table and the coffee-table and the magazine-table."

"But when I took up my pen, my hand made big, jerky letters like those of a child, and the lines sloped down the page from left to right almost diagonally, as if they were loops of string lying on the paper, and someone had come along and blown them askew."

I had been meaning to read this book for long time. I was restrained by two things- One, the book did not seem to be available in most of the bookshops I would visit; Two, I had a feeling that this book would be a bleak, gloomy and grieving story. This was the only novel which Sylvia Plath wrote before eventually committing suicide, only a few weeks after the book was published. The Bell Jar is almost a memoir. It is the story of Esther Greenwood, a young, bright student who is struggling with an intellect which is so prominent that it becomes a burden.

The awareness of genius which opens doors becomes a burden to the young Esther, a student, interning with a fashion magazine with other friends. At times, such abundance of talent becomes a boon with so many options it present that leaves the hapless young girl (or boy) baffled and confounded. I read this book after having read The Journals of Sylvia Plath and it is hard to believe how honestly and how blatantly she had picked from her own life to make this story. She is worried soul. The sense of time passing by, and not having produced the work of Art which one knows one is capable of- is the simmering theme in her journals. The same worry we find here in The Bell Jar. Any writer or an artist can immediately recognize this fear of having to pass through this life with stories unwritten, poetry un-penned, drawings not drawn. Virginia Woolf, a literary idol and inspiration to Ms Plath also found Fortieth birthday as some sort of doom, an indication that she was running out of time. In her journal Plath writes-

"The horror of being talented and having no recent work I'm proud of, or even have to show."

In The Bell Jar Esther thinks-

Like Plath, Esther represents a middle-class bright kid, who knows her calling is to be a poet or a writer, but cannot avoid her Physics and chemistry. She is a tormented young soul pulled between a world of convenient mediocrity and an agonizing search for the right place for her immense talent.

She lives in the dangerously conflicted zones of mind. As Plath writes in her journal-
"No children until I have done it."

Esther however, much like Plath, is a woman in constant turmoil- between the human and the woman, as if the two were antithesis to one another. She not a feminist, or the feminist as it was understood in the Sixties, a member of some sort of secret Women Only club. She wants to be with men, in love, married, have kids, eventually, but she wants to write. She slips into depression and only towards the end, when she meets Dr. Nolan, an independent, yet normal woman, that she gets the answer to the question-

In all her life for the first time, Esther finds a friend in Dr. Nolan, someone who could offer her what she needed, what any artist needs- An unquestioning understanding, a Tenderness. A friend is what she had longed for all her life. Then she trusts her enough to share with her, the deepest scar in her soul which kept her bleeding all her life

" 'What I hate is the thought of being under a man's thumb.....A man doesn't have a worry in the world, while I've got a baby hanging over my head like a big stick, to keep me in line' "

This is what I consider the most significant conversation of the whole novel. The whole matter is about coming to terms with what you are, without negating it, without getting into a conflict with it. She is not looking at chastity. She wants to have child, have a husband (be happy for the success of her husband as Plath was for Ted Hughes' success as a poet); but she also wants to fulfill the demands her own tremendous capabilities placed on her. She wants to celebrate being a woman without surrendering the promises her own talent places on her as an individual. Even when the story is about the struggle of an extremely, all-A, young individual, goes through the challenging world of depression, suicide attempts and mental asylum; contrary to my fears, the book and the writing is always bright, and hopeful in some sense. The style of writing of Ms. Plath is extremely visual. She doesn't write with the inward-looking patience of Ms. Woolf; she writes with an extremely observant eye which is her own. The language is extremely visual and picturesque (the excerpt on the top is a proof of it).

Fortunately, Esther finds resolution, unfortunately, Sylvia Plath did not and ended her life, much like Virginia Woolf. We are left only to wonder what great work we would have been blessed with if only she had lived longer.

My recommendation- Do read. This books will answer some questions for every artist even if you are not a woman.