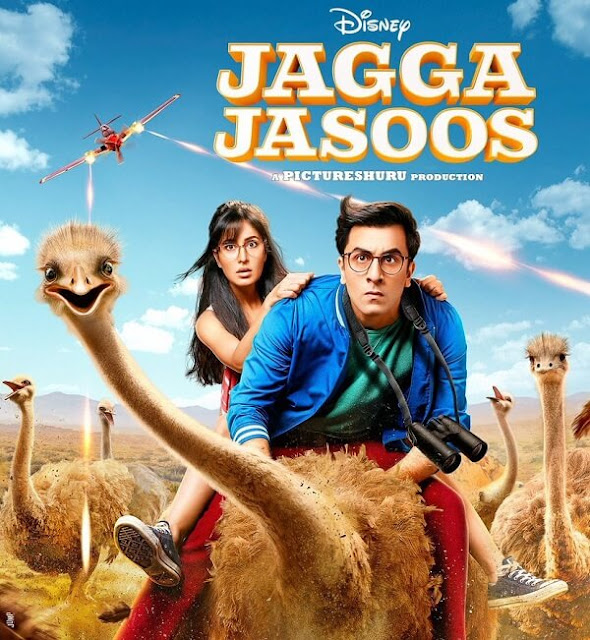 Graham Greene in his essay- 'Is It Criticism' writes-


"Film criticism, more than any other form of criticism, except perhaps that of the novel, is a compromise."


His point being that if one understands and writes about the craft, readers do not find such reviews readable. The reviewer at the same time is at pains to ensure that his review remains as enjoyable as the movie itself. I totally agree. What makes my job easier is that I am not a movie expert, at best, I am an avid movie-watcher and movie-lover.


Be that as it may, the film, Jagga Jasoos, wins my affection on form and fun. The film, purely in terms of form, a spy-story-musical must be watched for the audacity of making such an extraordinarily structured movie, so far from the usual. The movie is cute, exquisitely beautiful riot of colors. Without a doubt, one would think this movie must have lived in the mind of the Producer/Director, Anurag Basu for a long time, before being shot and canned and eventually reaching the screen, probably a childhood dream. Pritam has been hounded and ridiculed in the past for unoriginal music scores. He redeems himself in Jagga Jasoos. The music is brilliant, and will win with much little encouragement (a tough and complex call it must have been to promote the music of a musical; since being a musical, the movie is laced with songs). With such brilliant music, such lovely writing, it would have been hard to chose which song to take to the masses with more attention, which might explain bit muted music promotions. I found it odd that the song that stuck in my mind was not the Ranbir Kapoor's hostel dance, the song most often played on television. (though, undoubtedly, it is a treat to watch him dancing). What stayed with me was the odd-ball and funny:

(I hope I got the words right, age is catching up)


These were the quirkiest two songs, although the quirkiness which flows all along the movie makes it so special. The advantage of audacity is that it is very unlikely to be repeated, and will remain a testimony to the exceptional courage. That is what this movie creates for Anurag Basu, this movie, I suppose will live in his legacy as a film-maker and artist.


The movie is the story of a boy-man, Jagga-an orphan. The kid is taken in a hospital, where he meets Prof. Baadal Bagchi, who, we later learn, was an undercover agent for a rogue agency, led by Saurabh Shukla as the head of an intelligence unit turned rogue. There are some charming moments as the kid grows up and takes Prof. Bagchi, whom he calls as Tooti-Fruiti as a father-figure. Latter is chased out and the kid ends in an orphanage - hostel. The movie begins with Purulia arms drop, an event from 90s when surprisingly an alien aircraft flew into Indian Airspace and dropped weapons in Purulia in West Bengal. The accused in this episode of dark espionage and political conspiracy, Kim Davy, claimed the involvement of then Congress Government, who as per Davy wanted to create unrest in West Bengal in order to dismiss the Communist West Bengal Government on the premise of violence and impose President rule. The readThe event is taken as the backdrop of the story, as accident-prone Bagchi causes the alien aircraft to drop the weapon at wrong location and the story takes a start.


Jagga is a character who is on the border of fact and fiction, and we don't really get to catch if Jagga is a real person or a comic-book character. Jagga grows up as a kid with exceptional deductive skills which wins him the friendship of an amiable local cop, Inspector Palit (Rajatava Dutta). However, that does not matter. The story is not very complex, but is brave by the fact that it does touch the matter of Naxal movement, militancy in north-east, illegal foreign funding for the purpose of breaking India. Prof. Bagchi disappears and Jagga reaches out to the journalist Shruti Sengupta (Katrina Kaif) who is rescued by Jagga in the first half as they travel to Africa searching for Prof. Bagchi. The story moves into African landscape as they find and demolish the base of Arms supplier (supposedly behind Purulia and other armed insurgencies in India). This movie is not Chicago, a much acclaimed Hollywood musical, even though the format is same. The movie does not tire you in spite of lack of surprises and a very long length of three hours. It is our own, very Indian and very cute musical, and must be cherished thus.


Ranbir has acted phenomenally well, with great natural actors like Saswat Chatterjee, Saurabh Shukla and Rajatava Dutta around, he not only holds his own, he shines very bright, with his stammer, with his emotions, innocence and dance. Katrina is charming in glasses and fits well in the role of a London-educated journalist. We do not however find her writing ever. Well, trust Ranbir also being the co-producer, not much attention was paid to build the character of Katrina who largely remains a supporting cast. When the clouds are hanging heavy on these monsoon days, with grey depression of densely humid day clouding your mind, this is a perfect movie of bright happiness. Go watch it, with kids, preferably. It is an inspiring art and will inspire the audience too. In the middle of many nonsensical movies with hidden agenda (often not hidden well, for instance, Tubelight cleverly carrying the leftist narrative on India-China friendship (even holding Indian responsible for 62 war in some round-about way) and on nationalism, and Raees creating a Robinhood image for a criminal mercenary and religious fanatic (Latif had an only Muslim gang in Gujarat); Jagga Jasoos, for all its fault has its heart in the right place.