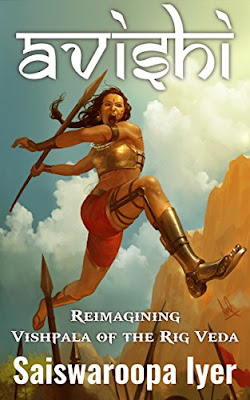 
I am a poor reader. Not that I read slow, or read less. I think, oftentimes, that I read too much for my own good. I read many books, in parallel, at the same time, picking one and dropping another and then going back to the earlier one.

In every book, there are some moment of lapses of laziness, some bored silliness, intermittent, while we wait for that moment which could pull us back from our dreary journey from one page to another. I usually find hard sailing through such moments, and then move from one book to another- an very unfaithful reader. There are very few books which hold me by my ears, not letting me move a bit, one way or other. I would fold the book and close the eyes, in between, but then, in those moments, I would be transitioning into a world created in the book, and not escaping it.

This book by Saiswaroopa Iyer is one such book. I must confess, I had picked this book with some sort of trepidation, afraid of my own expectations. There has been, of late, a deluge of books on Indian mythology. India, the sleeping elephant, has woken up, and is kind of shaking the dust off huge, gigantic body. We, in India, are now going back to re-discovering our heritage and history, away from the cunningly-crafted web of lies, essentially denying and deriding any of our ancient History. Only few days back, someone on Twitter quite confidently argued with me  that before the British, there was no such thing as India. If one refers "The Ancient Geography of India" written in 1870, one finds written references to India as Yin-Tu (Hindu) by the Chinese as early as 2nd Century BC.

There is, however, an awakening and a hunger to know the past- the real, non-communist, apolitical version of our past. And this explains the huge number of books written on Indian Mythology. When the volumes are higher, there is a real possibility of quality slipping down. I have found often the books on Indian Mythology, lazy work, too full of modern day cliche`s  and cuss-words which in the context of the stories, not only become obtrusive; rather are offensive as well. There are not many books like Vayam Rakshamah of Acharya Chatursen (in Hindi) or Narendra Kohli's work on Ramayana in the recent spurt of mythological fiction. In the recent books, one can possibly count Gurucharan Das's "The Difficulty of Being Good" based on Mahabharat as a book written with due seriousness, but it is too philosophical. That is where Avishi Scores. Avishi is honest to the context and history and ambitious in the fictional span.

Gender-fanatics might pounce at me for writing this but honestly, I find women authors exceptionally adapt at telling the stories with multiple dimensions and wider context. When one reads Virginia Woolf's "Orlando" or "The Waves" what stands out is how the story effortlessly grows and spreads and spans about. When one reads through the near-400 pages of this book, this realization dawns on the reader. Much like Ms. Woolf's books or better still, like George Eliot's Middlemarch, this book travels across the years, and places and right when one is wondering, as to where will it all lead to, with a pronounced feminine finesse the dices beginning to roll correctly in pattern, loose ends begin to get tied up in an exquisite and elegant design. This book is a work of definite and immense labor of love and it shows.

The story begins in an imaginary city of Vrishabhavati, on the banks of river Sarasvati (It is said that Rigveda was written on the banks of Sarasvati, which dried up as Aryans moved Eastwards towards Gangetic Plains, as in Atharva Veda the references to the Ganga comes with prominence), from where the Vedic Indian civilization is said to have begun. On the other bank of Sarasvati, lies the another habitation called Ashtangani, a collaboration of Eight Janapads, each with different occupational line. The two sides of Sarasvati represent the two world's coming together and this story takes shape on the sharp edges of the line which divides them. As we read in Vedic India, arable land in India was aplenty and was not a bone of contention, between the Aryan tribes and wars to conquer lands was rare. It was cattle which the fights were about and the term used to mention the war between tribes was Gavisti (Battle for cows).  Vrishabhavati is the representative of an earliest Monarchy, and with advent of Commerce, greed creeps in and expansionist tendencies begin taking shape. Still, when the story is told, overt expansionism is still not acceptable and even the evil king wants to extend his rule over the Janapada by means not as obvious as a war.

The Naimisha is a kind of Intellectual powerhouse which binds the multiple Aryan tribes together. It is a place where Rishis or the intellectuals live. They are the people who are engaged in defining settling the questions of public and private morality of a freshly civilized race and are thus held in high esteem. This rings to close to Sir Alexander Cunningham's contention that while India was split into multiple kingdoms, still these Kingdoms considered themselves a part of a larger religio-socio-political entity called Bharat or India as per the oldest inscriptions and literature. In this fictional tale so close and so honest to the real Vedic history, Naimisha is the over-Arching Aryan identity which connects all the initial habitations of Vrishabhavati, Ashtangani and Kaushala (the last one, not fictitious) and whose moral sanction is necessary for these diverse tribes.

The story begins with the murder of the king of Vrishabhavati and his royal guard, Sukratu, by his treacherous General Ugra. Sukratu's daughter Avishi is rescued just in time by a mystique tramp, Loha, who had taken shelter and living with Sukratu at the time. As they escape to the other side of Sarasvati, Dhruti- a warrior-huntress of Ashtangani protects them and dies in the process. Dhruti's husband, a Doctor saves them and once better, Loha drops now-orphaned Avishi to Naimisha, where she grows up into a young, warrior-woman. Avishi leaves Naimisha in search of her past and finds her future once she reaches Ashtangini. Khela, who was an underling of Ugra, is by now the new monarch of neighboring Vrishabhavati, having murdered Ugra, who is on an ambitious, expansionist drive. He attracts the artisans of Ashtangini by enticing them with more money, as they began to slowly turn into advocates of enemy state, in order to profit, under the garb of trade and cooperation with the neighbors. There is also outcasts, Dandaks,  who are used by Khela to fight for them.

The most wonderful part of this book is the tight leash that the writer has kept on the story, keeping it immensely gripping and engaging in spite of its length. There is suspense and conspiracy which makes it quite a page-turner. For an ancient book, it is quite surprising as to how close to the present it is. The greed, the dishonesty, the breaking down of the idea of a nation to help the enemy succeed- one can find all that in play in the modern day India. Satya, the doctor-mate of Avishi, whom she meets in Ashtangini, leaves her soon after in search of prosthetic limbs. When he comes back to Ashtangini after a failed search which led him to Naimish, he finds his mate (not Wife since the concept of marriage is still being debated in Naimisha) as head of the Janapada- the republic. His dreams and his discomfort in living a life as a faint shadow of a glorious wife sets him out again in the search, which he believes is the purpose of his life. Whether Satya finds his elusive invention? whether Avishi is able to defend the docile people of her newly-found home from their malevolent neighbor? - These are some questions which Saiswaroopa keeps adroitly wrapped in the layers of this thoroughly engaging story. Do read and indulge yourself with a world lost in the past, but which might, just might hold answers to many questions of the present and the key to our future as a nation.