In Defense of the Guru 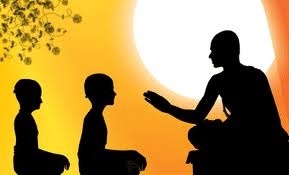 A great Guru, a master, a true Teacher needs no defense. He is not running a shop which needs defending. But a real Guru represents something bigger than his person. A real Guru holds within him knowledge distilled across the centuries. That is why he will be attacked, that is why he needs to be defended. A Learned master will not hand you over stale, second-hand knowledge. He will equip you with an ability to find your own facts, test your own truths, so you could breath in a free air and find for yourself the invigorating fragrance of truth. Truth comes in various forms and hues. What is true for me, may not be true for "Not-me".

Indian philosophy for centuries has searched the truth thus. A true teacher will not set up a Dera and tell you the rules to follow. He will set you free. He will tell you "This is my way. What is your way?" and will also tell you that there is nothing called "The Way". A true teacher will not set himself on a pulpit and speak at you. He will speak to you, in whispers, in silences and at times, he will speak even through his absences, in a way that you have never been conversed with before. You hear him when he is not speaking to you and you tell him your darkest fears when you are not telling anyone. He will not put you in his awe, He will make you comfortable. He will not throw his palms in the air and miraculously create ashes out of thin air; he will make the divine rise from the ashes. He will not charm you with magic, he will open the vistas of the magical within your soul to you. He will not throw complex word and confound you with indecipherable meanings; He will explain to you the deepest secrets of nature and life in a way that you would understand. His worth is not known by mysteries and surprises; his worth is known by sympathy and simplicity.

There are people who spend time in memorizing Vedic texts, memorizing rituals. They miss the truth for facts. They cannot be your Guru. They are those scholars that in whose voice, Nietzsche contends, frogs of stale water croaks. They are those who, Swami Vivekananda says, go into the Mango Orchard and count the trees, twigs and leaves. He further says "Religion is the highest aim of a man, his highest glory, but it does not require leave-counting." The second condition for a spiritual teacher which Swami Vivekananda puts is-

"He must be sinless." He says "It is impossible from first to last that there can be any spiritual light in that soul which is impure."

The Katha Upanishad says "Atman (the knowledge of self) when taught by an inferior person, is not easy to comprehend, because it is diversely regarded by disputants. But when it is taught by him who has become one with Atman, there can remain no more doubt about it."

We are a generation in a hurry. Therefore we are short-changed. We want to achieve salvation in a hurry. We must know there is no salvation without struggle. A small-time, smooth-talker will not tell you this. He needs you to follow him. He derives his power from the mob. That is not Sanatan, that is not the Hindu faith. Hinduism is not an empire-building religion. The success of Hinduism is not in numerical supremacy, the success of Hinduism is in spiritual emancipation. Bashing Hinduism has become an industry. When you attack Hinduism, you can be your worst self, release the worst of your being and still claim to be modern and liberal. Such is the way things are. They would want you to believe that every fall of any self-proclaimed God-man is a fall for Hinduism.It is not. Since when in Hinduism has the word of a man, any man, untested of reason, unverified on facts, have become a law.

Let me say it for those who would care to listen. Let us learn to wait, let us not make an error in desperation. A true teacher will arrive not by our desire, rather by the design of the divine. We must learn not to be in a rush. Those who take to teaching as a path to power, a way to wealth, are in rush too. They need mob around them, and they cannot wait. Mobs will beget mob. Pretense of power will bring more power. They have no patience, nor intellect to reach out to the truth, for themselves, for us. They do not have truth on their side. They will offer you heaven without hunger, Truth without tenacity, the fantastical without a just fight. Could Krishna not have offered salvation to Arjuna without the difficult and painful episode in which he lost friends and foe alike? Could he not have thrown his arm in air and offered salvation to the Pandavas? He could have but the job of a real Guru is to teach the right path, the just, the moral- the Dharma, not to facilitate easy success. But that takes time, both for the Guru as well as the Disciple. Swami Vivekananda says "We must all wait till the Guru comes and then worship him as God." Therefore anything less than the purest will not do for a Guru. Guru is the mirror in which we can see the self and clean our soul. A mirror with a crack or laden with dust will not serve the purpose.

The Sanatan comes from the inherent human desire to search the truth. It is the human quest of meaning. It is not a promise of magic, not an assurance of empire. But people will try to find equivalence. They have tried to do it with the Vedas, making them sound like dead, immovable fossils from the past, which they are not. They have tried to equate it with stagnant knowledge of the books which cannot be questioned, debated or challenged. Hindu scriptures are about inferences and initiation, not about dictum and decisions thrown at the larger masses by those claiming to be intermediaries of God. God will never need other people to talk to us. He talks to us all the time, sometimes we listen. People will tell you otherwise because never have they gone deeper. They have neither talent nor the intent to do that. They want to shock you into submission. One must always be wary of such people. Anything resembling this should be rejected. Read scriptures, read history and interpret them for yourself. Be ready to be a student and who knows, you might become a teacher. When you cut your roots and float aimlessly, because being rootless is fashion, you set yourself up to be fooled. Bring heritage into fashion. When your search for the divine is not driven by a quest for knowledge and emancipation, rather is driven by greed and necessity; you put your soul on the stall to be bought by the next missionary, the next God-man. Don't sell the magnificent so cheap. When you steer away from your ancient identity, which is eternal and ever-growing; when you mock the Vedas, the scriptures without trying to understand them; you leave a vacuum- A gaping abyss between yourself and the divine, for these fraud and fake intermediaries of the God drive into, on their obnoxiously jazzy luxury cars. There is a history of men using spiritual cloaks to hide their imperialistic greed. That has nothing to do with Hinduism. Don't let people fool you. Tell yourself, we need a Guru, but we are not in a hurry. Be prepared to wait for him, ready your soul to welcome him when he comes. Gather knowledge, challenge knowledge, refine it. Your Guru might well be inside you. There are no Godmen in Hinduism, tell this to those who attack you and there is no messenger. The Atman and Parmatman, the Self and the Divine, both are within my soul and I shall unite the two. That is what my Vedas tell me.  These Bling-Babas are not mine, nor are the representatives of Hinduism. Check references from the history to find who they resemble the most. They claim to have conversations with the God, they lay down the rules for the lesser mortals to follow, they do not debate or reason, the dictate and direct. They are the Anti-thesis of what Hinduism represents. Do not let people tell you that they are representative of regressive Hinduism. They are not, Hinduism cannot be regressive, it is an ever-flowing river of continuity. Let not the narrative drive you into embarrassed submission of a guilt over your glorious heritage. Hold your head high for you are the child of greatness, O' Children of Bharata!!