August 25, 2017
This is the second part of the series that I am trying to put together, trying to get a glimpse inside the Ancient History of our nation- India. As I write this, I am much troubled by the politically tweaked, hollow history taught to us which haunts us as the citizens of this great land which has been the northern star to the world that for a long time walked in the wilderness during the dark ages, while the Sun, that the Aryans would call Savitr or Surya , had already dawned on this land. This land which had not only discovered speech and language, as the celebrated fulcrum on which civilized mind rested (called Vach by the Vedic Aryans); but had already started on a journey of spiritual and philosophical journey, which the West would join only several thousand years later.

There were disputes around Aryan Invasion Theory. Some objected to my post which hinted to the same, although I had mentioned under due protest against the term 'Invasion' a much misleading term in the context of the period it refers to. When the Aryans arrived, even according to what I would call Aryan Migration theory, in around 2000 to 1800 BC, few centuries after the Harappan arrived  and settled down in Indus Valley as Meluhhans who had come earlier in 2500 BC, the lands were aplenty and Aryans had not arrived with the intention of settling down, adopting the agrarian nature of the earlier inhabitants. It was only in terms of cattle that the riches were measured even till the time of Atharva Veda. Furthermore, there was a definite intermingling of tribes and assimilation of practices as Shiv from the Meluhhans became the Greatest of the Gods for the Aryans, as cattle-rearing and agriculture became important and the same rituals which Aryans, the warriors, looked condescendingly in the Rigveda, became a part of settled agrarian lives of the Vedic Aryans in Atharva-Veda as they moved from the Indus-valley nurtured by the great river Sarasvati and became the celebrated Children of Ganga.

The insistence on calling this migration of races as invasion of Aryan is malicious on two counts- One, it does not as explained, in anyways qualifies as invasion, Two, I am not yet sure that there is enough proof of it. Mostly we go by the hints of the Aryan name in the Middle-East, for instance, the reference to the Aryan heritage of Darius, The Great; and in the writings of Herodotus. But to my mind, it could have cut both ways. Aryans could have moved westwards from East, following the trade route of the Panis or the traders of Mohenjo-Daro.

The fact that unlike the Greeks, Aryans were not much concerned about the proper recording of History does not help much. It is still in our interest to know as much about our own roots as we can. If one takes away the sense of structure from the British; the Audacious adventurous spirit of the Americans and heritage of history from the Indians- this would amount to taking away the very soul of the civilization.  While Aryans wrote excellent literature in form of Veda, it was more in the form of spiritual study than academic recording of the events. Vedas was a way of newly settled race, which had since then always been on the move, to understand the self, the nature and the equation between the two.

The society was as yet formed of Janapads, which was some sort of tiny replica of modern republic. The monarch was not there, though Military Commander was an early Aryan character. Aryans were much surprised by the fact that unlike their commander, Indra, the Harappans had no Commander. No wonder, they were over-whelmed by the military superiority of the Aryans. Weapons made of Iron, an unknown metal to the Harappans, and Horse-carriages too must have made a difference in their wars. Monarchies were in the nascent stages. As the idea of property and ownership began firming up, Commanders quickly became Monarchs entrusted to enforce the rules of morality and justice.

We find that the west of India (then-India, now Afghanistan) was ruled by Darius, the Great, in 500 BC. However, Herodotus does mention the Indians who never came under the rule of Darius and who lived in the East. While India was divided in various tribal kingdoms then, the entity as Bharat was still known as singular entity to the world spread from East to West (1900-2000 miles or 16000 Stadas) and North to South (22000 Stadas or 2750 Miles) as per Megasthanes accounts (350 to 290 BC). These references were not given by the modern thinkers termed as Hindu-wadi intellectuals with disdain by the leftist intellectuals.

Indian history is largely a matter of inference and interpretation. Unfortunately, our writers, for some reasons, who took pride in belittling our own history and heritage, not only have argued that there has never been any entity bound together as a nation before the British colonial rule, rather have in various other ways, have tried to inflict insults on the memories of the past, already much faded under the rule of the minority for several hundred years, first the Islamic raiders and then the British. Thus when it comes to the references of Beef, they would go down to the earliest of the Vedas, when the Military Aryan tribe was still laughing at the Agriculturist Harappans, and  when it comes to understanding the Hymns of the Vedas, they translate it literally, even when the writing is demonstrably metaphorical. We learn much of our heritage from Vedas or Words of Knowledge or wisdom. English word wit is said to find its origin in the word Veda.

Vedas or Samhita (literal meaning- Collection) are the collection of Rhythmic and poetic Sanskrit hymns. There are four Vedas - Rig Ved, Sam Ved, Yajur-Ved and Atharva Ved.
Rig Ved (The knowledge of Thanksgiving) is the oldest of the Veda, written in the Initial stages of the civilization, somewhere around the plains of now-extinct river Sarasvati in the North-west of the country. While the compilation of Rig Ved is estimated to be around 1700 BC, it is quite possible that this is the time when the various hymns were getting compiled by the learned people who got together to tabulate the wisdom which celebrates largely the co-existence of Human with nature. This refers to the time when Humans of the Aryan Race for the first time were finding the nature not as an eccentric evil, rather as a benevolent nourishing force. Ved-Vyasa , the sage credited with the compilation of the Vedas was in all likelihood not one person, rather multiple people who read and collated these hymns celebrating the forces of nature like the Sun , Varun (the God of water), Rudra (The God of Death and War), Agni (the Fire God) and even Usha (the Goddess of the dawn). This Veda is primarily of thanksgiving prayers addressed to various Gods.  There are ten books which makes up for Rig-Veda. Out of these ten books or Mandalas, Nine are clearly attributed to different Sages- Dirghatmas (Angira), Nodhas, Gritsamada, 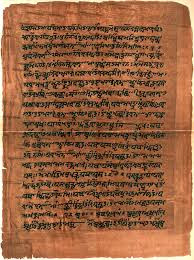 Vishwamitra, Vamadevas, Atris, Bharadwaj, Vashishtha and Kanva. The Tenth Mandala is a collection of hymns by various sages. Each of these families, came to be distinguished by distinct symbols- Vashistha had knot of hair on the right side, Atri had three knots, Angiras had five locks.

The oldest man, the father and progenitor of the Aryans is said to be Manu. Manu is the Aryan equivalent to the Greek Prometheus. He is the first man to create Fire. For a man just out of the Jungle, Fire was something, which made nights productive, the wild hospitable and the land arable. Without Fire, no civilization was possible. From the Fire, came the first five tribes- Yadus, Charvakas, Druhyu (or Gandharis who would later become a tributary to the King Darius of Iran in 500 BC), Anu and Purus.

The Vedas break into Samhita (Verbatim rendering of the hymns), Aranyaka (Rituals and ceremonies), Brahmanas (Notes on the rituals) and Upanishads (Philosophical and spiritual unraveling of the meaning of the prayers and the rituals) . The eight Brahman clans who are credited with compilation of Rig-veda are Jamadagni, Gautama, Bharadwaj, Vishvamitra, Vashishtha, Kashyap, Atri and Agastya. Jamadagni came from Bhrigu , Gautama and Bharadwaj from Angiras.

By the time, the battle of ten kings happen (Somewhere in 1600 BC) at the banks of river Ravi, of the King Suda of the tristu with other ten Aryan tribes tribes, Agriculture and cattle-raising was a part of Vedic Life. A daughter is called Duhitar (Milk Maid), a beloved Princess is Mahishi ( also meaning buffalo), assembly of tribes is Goshthi and a war is usually for the cattle and called Gavisthi. Greatest number of invocations in the Rig-Veda is for the Agni - the Fire God- the destroyer of evil which keeps the Rakshasas away in the darkness of the night and fills the night with light.

"We call on Agni, who gives food, with solemn songs,
thy rising gleam shines far into the sky,
To thee, rich youth, is every sacrifice offered;
be kind to us today and for the future.
..Shine most beloved of the Gods, let winged smoke ascend,
Bring thyself to us, thou whom the Gods once gave to the man upon the Earth...
Give us treasures, gladden us;
Shine and protect us from sin by knowledge;
destroy our enemies, protect us;
Protect us from the murderers and cruel birds of prey;
..No one can approach thy darting, strong, fearful flames;
Burn the evil spirit and every enemy."

The Battle of Ten Kings in 1600 BC will change the political scenario as the Bharat king Suda (After whom India was named as Bharat) won under the guidance of Vashishtha, defeating the alliance of ten tribes (which also included the Panis or Businessmen from Harappan descent). Six Thousand of mounted Anus and Druhyus perished and sixty-six heroes fell. Bharat later would merge with the Purus and be known as Kurus.  This marked the firming up of the federation of Aryan in the plains of Ganga and Yamuna. This is where later on Atharva Ved, the last of the Vedas be written in 900 BC and this shall be the stage on which Ramayana and Mahabharata will unfold. As the dust settles after the Battle of Ten Kings, Bharat are settled on the West of Vipasa (Beas) river, the Matsyas (who would later move to modern day Rajasthan on Western India) and Yadus settle on the banks of Yamuna; Panchals (a coalition of five tribes) between Yamuna and Ganga; On the banks of Sarayu, the Kosala; Towards North East of Ganga, the Videha; Kashi, Anga and Magadha along the Ganga.