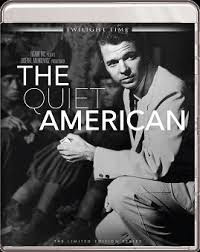 Writer: Graham Greene
Genre: Fiction, Classis
Rating: Must Read
Every writer has a story to tell. It is all about a story which finds its way to the paper. We all tell stories. What makes a story well-told and great, to my mind, is the connect the writer establishes between the story and the environment which sets the context of the story. Once we understand the world in which the story unravels, we are immediately hooked to it. In a subtle view, the writer sets the context which helps the reader learn the micro as well as macro contexts of the story. A great story like Stendhal's Red and Black is not only the story of the protagonist, but it also narrates the French revolution, the sudden absence of Napoleon from the french world within which the protagonist falls in love and out of it.

The Quiet American by Graham Greene is one such exceptionally told story which contextualizes the murder of an idealist, tentatively a propagandist, American, Alden Pyle in Vietnam, struggling between an absolutist communist and a fierce democratic ideology struggling for space in Vietnam. The story does not float in the dark, unknown skies like floating candle with no connect with the Earth over which it hovers, rather it settles down with its weight in the marshy farms of Vietnam, where amid physical violence of the war, also plays the ideological war of the Americans. The young diplomat, Alden Pyle, supposedly working to create a middle-path arrives in the war-torn Vietnam and befriends the narrator, middle-aged and cynical war-correspondent Thomas Fowler. Here is Fowler describing the naive, plush wide-eyed idealistic admiration for someone like York Harding-

"I was to learn later that he had enormous respect for what he called serious writers. That term excluded Novelists, poets and dramatists unless they had what he called a contemporary theme."

A young, rich and well-connected Pyle wins over the native girl, Phuong with the false promise of marriage and a great life in America. Pyle, a fan and admirer of York Harding, an ideologue and writer, eventually turns out to be an under-cover operative getting weapons and explosive into Vietnam. The story ends with the murder of Pyle.

Through the wonderfully told story, full of aphorism and words of wisdom, we find the conspiracy of media and politics unraveling. We understand how those reporting the news grow too big for themselves and begin to believe themselves to be the News. While we may not be in a physical war now, there are multiple wars unfolding, numerous battlefields in operation, and it is a great book to understand how media, at times, work not only as a tool to the politics; many a times, it tries to use politics as its tool. Fowler calls it out when angered and frustrated (suddenly I was angry; I was tired of the whole pack of them with their private stores of Coca-Cola and their portable hospitals and their too wide cars) at the loss of young life of Pyle, he tells the Economic Attach`e
referring to Pyle-

'Yes, they killed him because he was too innocent to live. He was young and ignorant and silly and he got involved. He had no more of a notion than any of you what the whole affair's about, and you gave him money and York Harding's book on East and said, "Go ahead, win the East for Democracy. He never saw anything he hadn't heard in a lecture-hall, and his writers and his lecturers made a fool of him." '

When I read this, I think of JNU, when I read of York Harding, I think of Chomsky, writing open letters based on fake, manipulative news articles. And I think of numerous Indian journalists and media personalities when I read Fowler deliberating on his own-

"He's a superior sort of journalist- they call them diplomatic Correspondents. He gets hold of an idea and then alters every situation to fit the idea."