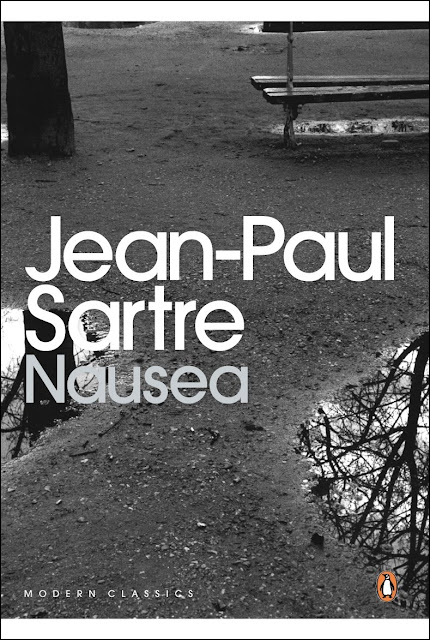 There are some books which take time to grow on you. Some books will never hold you long enough to be able to impact you unless you are, well, their 'type'. Nausea by Jean-Paul Sartre is one such book. I, fortunately or unfortunately, am of the type. I remember finding in a moment of serendipity, Thus Spoke Zarathustra by Nietzsche  one night in the shared rented house, left by the landlord gathering dust in a shelf, and staying up till the dawn reading it. I found myself a changed man after reading that. I read Dostoevsky's Notes from the Underground much later and the philosophy lingered for a very long time. Those were the books from the aftermath of which my modest intellect could barely survive.

A philosophical Novel, which is more of a study in existential philosophy than a Novel with a story-line, places Sartre in the list of greatest existentialist writers in the history. It is a matter of sheer coincidence that I read Nausea and The Fall by Albert Camus in a gap of not more than a month. The both are so similar in the treatment of almost identical subject. It was years after reading Thus Spoke Zarathustra that I came to know that the thunderbolt that had hit me that night when I read Zarathustra is called as Existentialist literature.  I am not a literary expert, but if the question- How do you know what you are reading is a example of  existential literature? - is ever hurled at me; I would only say that if the structure is indefinite and the unease that is causes to the soul, expands into formlessness, like some kind of headless amoeba which threatens to engulf not only the reader, rather the world around him- it would qualify. In existentialist literature, the writer is not bothered about absurdity and the meaning rises from the insane hopeless of absurdity.  Existential literature in essence, is in search for the meaning of existence, and in the end declares that there is none to be found. Thus it is an exercise in futility. Characters in existential literature are invariably broken, worried, saddened and depressed by usually a sudden discovery of the meaninglessness of their very existence. They are usually in their middle-ages, as this is the time when we begin to cede our space in the social structure even in our minds. The strength, the abilities are on a decline and the years behind us depresses us more than the hope that the years ahead of us promise. With an exasperated sense of loss, the narrator of Notes from the Underground says,
"To live longer than Forty years is bad manners, is vulgar, immoral."

We search meaning of our existence in something lasting- a piece of literature, a work of art and if nothing lofty as Art, possibly, in an act of kindness. The man in the story is always caught in a monotonous life, living as they say a life of Quiet desperation. Through a period of futile search for higher meaning, a realization that the existence itself is the meaning of the existence. The setup is dim, the clouds are heavy and lights are dying. The protagonist is trying to find a justification for continued existence, as the higher reason loses its relevance. Antoine Roquentine unlike Dostoevsky's isn't failed in the worldly way; He is a successful lawyer, has been in love, but has run away from it all haunted by the meaningless of his own existence.

Where this book moves away from Dostoevsky's masterpiece is that if progresses through vagueness and in portions, it loses interest in the plot. Vladimir Nabokov absolutely hated this book, most likely on this account. The book stands tall on the philosophical point but reader's attention hangs on a fledgling story-line. Although I would still empathize with Sartre, when the idea, the philosophy of the story is so strong and the writer is so in love with the philosophy, often the story suffers. It is very rare for a philosophy-heavy book to shine with enough warmth to hold the attention of the reader on a cold, winter night. There are some accidental surprises we have like Thus Spoke Zarathustra where the power of poetry lifts the language so high that it levitates in all its glory over a non-existent story, where a man keeps moving with a lamp in broad sunlight. Then we have some exceptional books like The Red and the Black by Stendhal or The Waves by Virginia Woof both not existential novels but still deep in philosophy, backed by exceptionally great story-telling. Even on the side of existential literature, we have great work of Dostoevsky who creates an exceptionally engaging story through which his philosophy progresses in successful novels like Notes from the Underground and Crime and Punishment.

Balancing story-telling with strong philosophy is a delicate affair. Nabokov is scathing in his 1949 review. He notices (inescapable shadow there) Dostoevsky. He writes,
"Somewhere behind looms Dostoevsky at his worst"

and summarizes dismissively towards the end -
"to make it exist as a work of art was beyond Sartre's powers."

I think it particularly unjust and peevish of Nabokov. His quarrel with Sartre begins on structure of the novel itself, which is structured like the diary pages of Antoine Roquentin. I find this unfair. There are still excellent prose in the book which leaps at you in all their splendor. There are sentences which speak to you in your own voice. For instance, see below:

'I wanted the moments of my life to follow one another in an orderly fashion like those of a life remembered. You might as well try to catch time by the tail."

Such a search of orderliness in one's life will ring a bell to every individual. However, the novel flows in sudden spurts. Albert Camus, the next big name in the worthy existentialists, reviewed Nausea in 1938 more kindly and confessed that the novel became 'a part of him'. He called this novel "nothing but philosophy expressed in images."
Camus further celebrates the greatness of Sartre's writing, as he writes-
'Each chapter of the novel reaches a kind of perfection in bitterness and truth.'

He however acknowledges the problem with the flow when he says - ' The shift of pages from one to the other is too rapid, too unmotivated, to evoke in the reader the deep conviction that makes art of of the novel'
He adds-
"Some indefinable obstacle prevents the reader from participating and holds him back when he is on the very threshold of consent."

This is where Dostoevsky gloriously succeeds. This is a point where Camus himself did not do too well in his similarly themed novel The Fall. Sometimes, knowing does not help. Sometimes, the power of philosophy is so strong and captivating that the writer has to helplessly give in. Success is to give in as Neitzsche and allowed it to be what his book insisted on becoming- a philosophical work, a poetry in prose. In spite of all its failings, once you are in a right frame of mind for philosophy, do go for reading it. It is an enlightening experience. It is beyond ordinary reading.