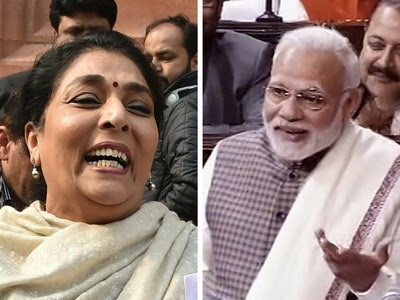 In the past few days, attempts were made to re-define Women empowerment and emancipation with two independent events. In one of the event, a left-leaning, establishment-hating poet of sorts was caught making immoral demands on underage girls, who were supposedly his fans or friends. The second event which was somehow positioned as a matter of woman's dignity was when many times Congress Parliamentarian, supposedly in the possession of expensive diamonds gifted by a tax-evader was caught having a dangerously deriding and derogatory laugh in the parliament, during the speech of Prime Minister, in spite of being chided by the speaker of the House, who happens to be the Vice-President of India. This brought in a minor rebuke from the PM, who compared this laughter which feminists struggled to defined something between crackle to smile with a soft sound, with that of characters in the TV serial Ramayana of yesteryears. The rich and powerful politician, Renuka Chowdhury, infamous for slapping in Government Servant and charged with taking bribes and well-known for using ill-language, saw the opportunity in to rediscover herself as a primitive, poor woman right out of her cave and being rebuked by a patriarch on being improper.

In an example of brilliant acrobatic skills, in the first case, where the celebrity poet was caught seeking nude pictures of underage girls, feminists of the world came together expressing solidarity to the aggrieved soul of the celebrity caught in this immoral exchange. This proves the level of emancipation our celebrity, left-liberals have achieved in terms of gender-neutrality. When it comes to their own, there is no division of gender and you will find women of the wine-sipping elite celebrity groups standing by the men of their kind. For them the world is beautiful with all the boundaries of gender, religion and faith non-existent. The only division that they realize is that of celebrity and non-celebrity. So we had a woman poet, a raging feminist as she describes herself, standing by the erring man, claiming that by apologizing profusely the man has equaled and surpassed the agony of little girls who were asked to share nude pictures by the man they were fan of.

For the same feminists, who disowned the little girls, the powerful Congress leader became a poor woman to rally behind. The Eagle became representative of pigeons and the lion represented the rabbit, as the empowered women strove for sympathy for another empowered woman.


In their hyper-excitement, warrior women-folks rose from two disparate ends of the battlefield. On one side was the opposition of demonization of Ranuka Chowdhury as she was compared, allegedly, with demoness Shoorpanakha, on the other side, was the attempt to deify Shoorpanakha. One needs great imagination, even assuming that PM referred to this particular character from Ramayana, as to if Shoorpanakha was only an emancipated woman in love, demonized by Valmiki, where is the offence and if she was indeed a demoness, where is the proof. The two arguments fed on themselves and in the end there were only ashes of hypocrisy. On account of conflicting messages, and cancelled outrage, Renuka episode will go down as a black-day in WhatsApp coordinated outrages organized by the Congress.

As far as the Sagarika (fondly called as Shogorika by those feigning acquaintance of the high-priestess of hypocrisy) Ghosh group of protesters go, Shoorpanakha was a woman in love, who had to suffer the royal ignore of a high-headed patriarchal Ram. Unfortunately for Ms. Ghosh, between Ram and Shoorpanakha, latter was  Brahmin, which makes the powerful narrative of Gupta school of thought impossible. With her position settled in the case, as a pro-woman warrior, Ms. Ghosh ignores the plight of married woman, Sita, who had left her home and then, in-laws, to accompany her husband in the difficult life of the Jungles and whose husband Miss Shoorpanakha, oh so poor demoness, threatens to acquire, putting her in the bracket of Right-wing women deserving no affection from her, termed derisively by her as Internet Hindoos.

The question remains whether it was moral for a woman to force herself on a married man while his wife watched in agony? But then socialism frees you from such scruples. The world-view of liberals is fairly simple- it is divided between Haves and Have-nots, and Haves deserve support, Have-nots pity. Sita,though a woman, like those under-age girls, fell in the latter category, deserving pity and not support. There are many men and women known more for communication than content jumped into the fray, attempting to prove that Shoorpanakha in the whole story was wronged woman. One should not be surprised that some day in JNU we have Padestrian Poet reciting on Shoorpanakha. Shoorpanakha was not a naïve woman, she was not an emancipated woman. She was an entitled woman who felt adultery is a way to emancipation. She was not a foolish or ignorant girl who did not know that Ram was married woman.
As the Sri Ram and Soorpanakha dialogue begins, Sri Ram introduces himself:


This here is my wife, Daughter of Videha (Ascetic King Janaka) who is named as Sita.

Not the one to be deterred and sure of her superiority, Shoorpanakha doesn't think twice about trampling over the right of a married woman and responds.:

Ugly and deformed, this woman is nothing like me, I am the beautiful (and entitled one) and better suited to be your wife.

Sri Ram again discourages her (Consider that this was the time when polygamy was much in Play, and Sri Ram was for the first time setting the rules for marital morality in human lives), says:

What will you get by pursuing me? I am married and much in love with my wife and a life as second-wife will only bring sorrow to you."

Hearing this, the innocent love of Soorpanakha (who in between had also approached Lakshman to be second or temporary wife and was advised by  Lakshman not to waste time with him who was mere servant of Sri Ram and who in a jest, seeing that Soorpanakha's amorous adventures were driven neither by love of Ram or his, rather by her self-love and pride, says that she was so beautiful as compared to Sita, I repeat the rightful wife. Not a minute to be wasted for this woman on a mission to quickly seek love from one man or another, she turned back to Ram). Finally appreciating the situation that this woman needs to go for her to get Ram and understanding that in the deep forests of Dandakaranya there was no Hotel Leela around and she herself will need to take the important task of liberating Sita from the perils of this mortal life, she suggests, the sweet woman much loved by Sagarika and Sahelis, to eat up Sita, what is kind woman in love she is. Says Shoorpanakha:

I will immediately devour this human-girl and we can live then, happily ever-after without  the stigma of being second-wife.

The Gandhian with Swords then attacks Sita,and patriarchal Rama pushes her away and asks Lakshman to punish her. Don't get Sagarika wrong, her plight is not for Soorpanakha; it is more for attacking Ram who represents people she hates the most. Those middle-class believers who she call Internet Hindus. As we see, Soorpanakha is not wronged women rather was an aggressor. Odd that they deify Soorpanakha and still take offence on Renuka Chowdhury being allegedly compared with her.

The laughter, the deriding laughter in the Parliament where tears and sorrows of the last man in the line, during the speech of elected Prime-minister is not the question of gender-equality, it is the question of cross-gender stupidity. It is not about class-fight, it is about a retort on crassness. We don't object to women's Right to be Free, we object to the insistence of some women about the right to be foolish. Ms. Chowdhury could have taken the podium, debated and brought the house down with laughter. But she chose to heckle the PM when latter held the podium. It is not the question of discrimination, as some are making it out to be. It is the question of decorum, decency and dignity in Democracy.