The Sounds of Sunday!! - A Word Sketch

February 18, 2018
Silences have settled on the day like dew-drops of a receding winter night.
The day stands at the cusp of weather where winter recedes and the summers descends.

Fogs have lifted and the skies are cloudless and clear. I walk through the lane, on which shadows have spread themselves beautifully. Words come to my mind: 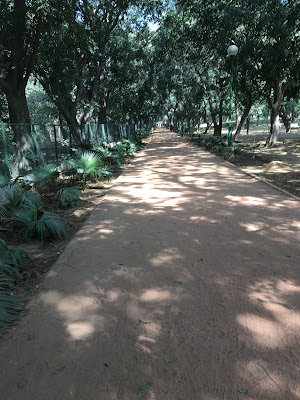 some slithering snake;
Sneak in surreptitiously l
like some memory lost,

A memory of warmth, surviving,
Undying winters and unyielding frost."

The bright sun rays languorously lie on the Earth, with their long legs spread under the sketchy, shifting shadows of the trees. A perfect day to reclaim the me-time, basically, catching a corner bench in the park for myself, before it is appropriated for the day by some cozy couple.

I mutter wordlessly, seeking forgiveness from the angel of Love for interrupting the just right of a young couple who detected the bench a moment later than me, and I settled down interrupting their mischievous plot to spend the  Sunday on this bench with jackets spread on their heads joined in oneness. The boy wears a gray jacket, the girl a jacket with bold blue squares on a white background. They look sweet and surprised. Do not know what surprises them. Ah, it must be age. At that age, if one is in love, everything is mystical, magical and surprising. Pity that as we grow older we lose the ability to amuse ourselves and slip in to defined patterns.

I read, Night and Day by Virginia Woolf. Such exquisite prose, charming words. Her words 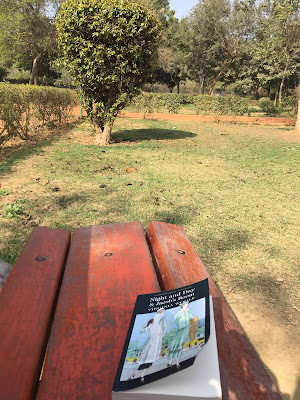 never fail to fill me with two totally contrasting emotions. A fantastical feeling of fulfilment, and an immense idea of my own inadequacy. So uplifting as a reader, so devastating as a writer.

Birds chatter and I put my book down to write. I immerse myself in sounds- sounds we hear but seldom listen- the sounds of life. Crows cawing incessantly, and then some sweet sounding birds interrupt with a charming chuckle. Oh and that sudden sound of yearning from a distant peacock resonates through the greens, floats over the calm waters of the lake and then rises and loses its way in the air . Yes, the little birds with sweet voices sound as if those voices were smiling. An occasional airplane interrupts the solemn soliloquy of beautiful birds with their rude and metallic temper. A bike with intentionally take away silencer, interrupts the music of the morn. But it passes away, into oblivion, like human life itself, coming out of nowhere and fading into nothingness.

The birds do not mind. And the sounds continue- the birds, the sprinkler watering the grasses, routine dance of music, chuk, chuk, chuk, chuk- the sprinkler doesn’t intrude into the schemes of sound, just offers some sort of background rhythm to the whole structure of heavenly music which wraps around me.

A man runs, at a distance, at twelve in the noon. Huffing behind an age that runs away, chasing it, not to give up ever. A child's chuckle suddenly floats from some corner. Just a swift signature of humanity on the slow music of the nature, adding to the melody. The squirrel gallops, pauses and ponders. She looks at me as if I were a potential adversary. Realizing that I wasn’t, she continues jumping around, suddenly happy, a load lifted from its tiny heart.

Shadows have shifted, my bench is now under the Sun. The winds are little agitated and the leaves add to the various sounds of Sunday. It gives faith that on this day as on any other Sunday, amid cacophonous cawing of the crows, a sweet, soft occasional sound will always be there if we hear intently enough and will convert the mundane into magical. 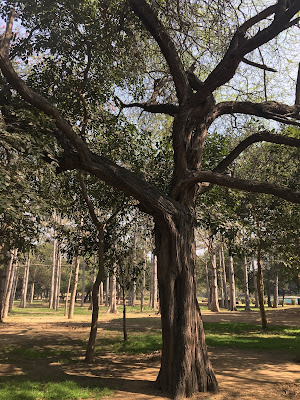 The hues have shifted from the bluish-pink to orange. I rise from the bench, the girl in Blue-and-White jacket looks expectantly. This bench seems to be strategically located to let in the Sun and keep the prying eyes out, and is therefore coveted to young couples. I vacate the place. They get up from the ground under the tree, ready to conquer this place. The tree stares and smiles and wishes them luck. In a world of easy liaisons and fleeting loves will their love survive the shifting seasons? Who knows. But it is beautiful when it exists. The day has moved. Another day. One fine Sunday!