Ganjhon Ki Goshthi- Why and Wherefore?

December 28, 2018
From the world of Self- Publishing, where I have been writing, publishing and struggling to propagate my book, finally I have meandered into the world of formal publishing with the nudge, push and support from Indic Academy (http://www.indicacademy.org), with well, Hindi satire, Ganjhon Ki Goshthi.


My previous books were in English, and with serious content, for two reasons, one, I was not sure about the receptiveness of readers towards Hindi and secondly, I did not know that I have in my writing style something which could be considered as the funny streak. I would read with awe and admiration of an apprentice and a student, the brilliant writing of great Triumvirate of Hindi Satire- Sharad Joshi, Shrilal Shukl and Harishankar Parsai.

Many people ask my why the name of the book- Ganjhon ki Goshthi? The term comes from the immortal book of Shrilal Shukla ji, Rag Darbari. Rag Darbari   narrates the story of the residents of a fictitious village Shivpal Ganj, which can be any village in the hinterlands of India. The residents of the village proudly call themselves, Ganjha. No one can explain it better than Shukl ji as he mentioned in his book.

The time of the when the book eventually went in for the print, the social media world, in particular, and Indian politics, in general, was reeling under the expose around Cambridge Analytica. There were vested intellectuals, pretending to be concerned neutral citizen, crying hoarse about the problems with privacy, on account of Unique Citizen Identification, but were cryptically silent about exposed links of data theft and outrage manipulation and unrest creation with data on social media.

The hope and idea was to create outrage, unrest, chaos and then somehow return to the old regime and the old world order. As we found, it did not work. It did not work because India is largely populated by people with keen understanding of politics. India lives in villages and small-towns and as the distance between the thinker and the doer increased, the college lecturer, AIR working, columnists gave way to the courtier intellectuals, the chasm between the intellectuals and those they claimed to represent widened. So much so, that they read all the prospective moves of the masses wrong. They got on Social media, to get closer to the general populace, but there disdain for the masses was to pronounced that instead of learning from them, the tried to set themselves up on the pulpit. The spaces shrunk and their ivory towers moved into the sanitized spaces of swanky TV Channels. The people who called out their bluff, underlining the stupidity of these City-dwelling, self-proclaimed pedagogues, election after election, surprising and annoying them, were the quintessential Ganjha.

Ganjha is the common Indian citizen who struggles to make ends meet, who commutes in a metro or crowded local to the work. He is not the one to be swayed by the propaganda. He has utter disdain for people who try to teach him the unreal. My book looks at the events around with the disdain of that man in Arrah, Lucknow, Indore, Bhopal, Raipur, Guwahati, Patna, Bangalore, Gurugram, Vizag, Bhuvaneshwar, Mohali and Tiruananthapuram. This book looks at the world which unfolds around us with the cynical humor of a Ganjha. A Ganjha knows the games being played and still indulges the players with the rare blend of cynicism and hope. He is the Indian who refuses to become the pawn of nefarious political maneuvers, driving wedges among the citizen, in the name of Caste, Religion, Language, so that they could once again rule over the nation. It is not only about political supremacy. It is about cultural and intellectual supremacy. The moves are swift and smooth. But as long as Ganjha  is on the watch, the nation is safe. My book celebrates the Ganjha, who has lost hope in politics but has hope in the Idea of India. He is the one who works on the ground to create the new India and is derided as troll by the intellectual mafia of the yesteryear. They don't like him for that and hate that he slowly, while earning an honest bread, is breaching the intellectual apartheid, one step a time. But do not get me wrong, Ganjhe are there to stay. They are our last defense, as a nation. I invite you to join in to this Ganjhon Ki Goshthi. 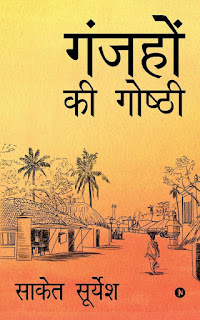