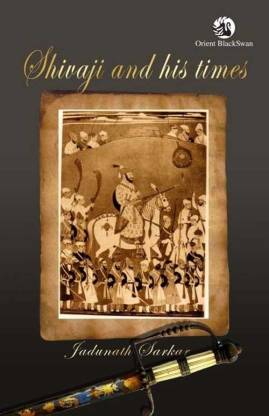 The Corona scare is there and there seems to be no other solution to fight it off than to avoid the spreading of it. This is 22nd of March, 2020 and India has gone into shutdown till this scare subsides. I fear, living through it will be as difficult as will be coming out of this.

However, I have decided to use this time to look after health of the body, and mind. Reading forms major part of the second aspect. I have decided to share the reviews of what I read for the larger people. This is day 1, with Jadunath Sarcar's - Shivaji and His Times.


Born on 10th of December, 1870, Shri Jadunath Sarcar was a scholar of unequaled brilliance. In 1891, he graduated in English, topper in MA and taught at Presidency College, Calcutta (now Kolkata) and later at BHU. He wrote this book Shivaji and his Times in 1919.


The great thing about this book is that it stays away from the narrative building mode of writing history, as is the wont of later day Marxist historians and even of some Rightist writers. By his own admission, Sarcar rejected the adulatory and near-fictional writings of 19th century like Chitnis Bakhar and Shiva Digvijay. He rather uses extensively to cross-verify the claims with the British and Portuguese sources which were more factual, given the fact that as the Indian political world collapse under the weight of Cruel imperial force of Aurangzeb as he went around like mad demon stamping on the soul of Hinduism, a faith followed by the majority of population he ruled over, the foreigners took a ring-side bipartisan view of the situation.


This makes this book exceptionally important. His praises of Shivaji aren't adulatory, his evaluation unconcerned with the public opinion. The story starts with the birth of Shivaji to a Noble under he Adilshahi rule, Shahji Bhonsale, on 10th of April, 1627, at Shivneri fort. Writer details the geographical and economic details of the area, connecting it beautifully with the spartan life of the Maratha people (as evident in the fact that even at the height of Maratha power, extending till Attock in Afghanistan, the palaces were modest wooden structures back home in Pune). The lack of avenues of agricultural occupation, due to hard lands, soldiering was a preferred profession, as JN Sarcar writes, Strong muscles and stout hearts found greater rewards and a higher position by serving in the armies of the mighty monarchies of the central plateau. He sums up the Maratha character quoting Huen Tsang- The inhabitants are proud-spirited and warlike, grateful for favors and revengeful for wrongs, self-sacrificing towards supplicants in distress and sanguinary to death with any who treated them insultingly.


Although Sarcar concedes that constant harassment at the hands of Muslim rulers did not leave the purity of soul as was seen by the Chinese pilgrim, still the basic character remained same, in terms of activity, courage, self-reliance, self-respect and love of equality. Economically, the Maratha society was not so split in terms of the poor and the rich, as it was in the North, in Delhi and Awadh. Hindu society was transforming and embracing various castes and classes as is evident from the religious teachers of those times - Tukaram (1568), Ramdas (1608), Vaman Pandit (1636) and Eknath(1528).


Jadunath Sarcar calls the biggest weakness of Maratha race, who he calls, Indian Spartans, is their lack of business acumen. There are issues with dates in the sources, which Shri Sarcar admits. The common date considered for Shivaji's birth is 19th February, 1930. However, writer does not agree with this date, and goes with 10th of April, 1927, as mentioned in the diaries of Maratha secretaries. Another point he bases his reasoning on is the fact that Shahji Bhonsle left Jijabai, Shivaji's mother in 1930, and took second wife, Tukabai Mohite. Therefore, he makes the inference that by then Shivaji was already an infant of three years of age. In 1936, Shivaji was moved to Pune under the guardianship of an Administrator of Shahji, Dadaji Kond-dev.

Jadunath Sarcar explains the Maval society in great detail- the Deshmukh, of Shivaji's caste, the Brahmins as administrators and the Kayathas as clerks and correspondents (Prabhus). This Maval country on the Western Ghat, Sarcar contends is the cradle of Shivaji's ascent to power. From this region, Shivaji got his best comrades like Yesaji Kank, Baji Pesalkar and of course, legendary, Tanhaji Malusare and Suryaji.

Dadaji died in 1647 when Shivaji was 20 years of age, having united the 12 Mavals under Shivaji, having entered Shivapur to arbitrate on some land dispute. Hindus were depressed as a state policy in the state of Bijapur (Basatin-i-Salatin) and this was leading to isolation of Hindus in the region. Shivaji began his active life early in 1646 as a Ninteen year old, capturing Torna fort, the first victory. He then builds his first fort, the Raigad fort. Then came Chakan, Baramati and Indapur to his fold.

In 1648, Shahji Bhonsle is arrested and brought in chains to Bijapur by Adil Shah. Shivaji reaches out to Mughal Prince, Murad Baksh. With the mediation of Sharza Khan and Randaula Khan, Shahji is released. Shivaji between then and 1650, captures the fort of Purandar,  and in 1656, after relative lull, captures the fort of Javali. Javali was under More family, under the Bijapur Sultan, headed by Chandra Rao. The first attack was made by Raghunath Ballal Korde, where Chandra Rao and his brother Surya Rao were killed. Javali falls to Shivaji on 15th January, 1656. Another officer, the Diwan, Hanumant Rao More, rallied opposition to Shivaji and was later killed. Chandra Rao's friend, Pratap Rao fled and came later into picture when he assisted Afzal Khan during his famed campaign against Shivaji.

The book covers in great details the setbacks faced by Shivaji, the loss of his forts, his impossible resurgence again from that setback, the incidence of Shaista Khan who was attacked by a small team led by Shivaji, which ended with loss of fingers physically and a face, figuratively in the Mughal court. Then there is a very detailed account of Afzal Khan affair where it is clearly settled that had Shivaji not killed Afzal, he would have murdered Shivaji. Sarcar writes rubbishing the later historians claiming that the murder of Afzal Khan was an act of treachery on the part of Shivaji. He writes- Sabhasad (1694) and Malkare (1750) at least cannot be suspected of any design to whitewash their hero's character by falsifying history. In saying that Afzal struck the first blow, they truly record in a genuine old tradition and not a modern nationalist invention. Sarcar also mentions the legend around the time about Afzal Khan having killed his 63 wives before leaving to meet Shivaji. He mentions the famed encounter in detail- Shiva mounted the raised platform and bowed to Afzal. The Khan rose from his seat, advanced a few steps and opened his arms to receive Shiva in his embrace. Suddenly Afzal tightened his clasp and held Shiva's neck fast in his left arm with an iron grip, while with his right hand he drew a right hand he drew his long straight-bladed dagger and struck the side of Shiva. This was a turning point, not only in the history of Shivaji, rather also in the history of India, as we know it today. It was not the time for moral heroism, it was a time for ruthless survival. And when we look back at it, Shivaji, turned the history back from a point where we might have been all set to lose our cultural roots to the ancient India as a civilization. The depth of details bring in a strange sense of realism to the stories we have only read as fiction. It is a must read for all lovers of India history. This is a version untainted by politics.