The Martial Hindu And Why Shivaji is not Taught to Us? 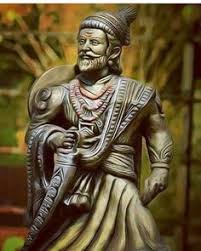 We have been taught, largely since independence, a Hindu needs to be docile, fearful and timid. If a Hindu is anything like valiant, proud or assertive, he should be ashamed of himself, else he or she will be likened with a Godse and called a terrorist. This tendency took more shape during a decade of UPA regime under the Sonia Gandhi. Not much protest came about as we have largely accepted this caricature of a Hindu who can not have it in him to hit back. As No-Go areas began springing in the society, under the influence of Wahaabism supported by a power lobby which worked at two levels- the obvious, which was the Congress and the subtle, which was the Communists; taught by Marxist historians, Hindus slowly and slowly began believing that the Hindu race had no trace of Martial strength in it. There cannot be a bigger lie than this.

It is true that Hindus were not culturally and historically inclined to be in a state of perpetual war readiness, Hindus were no cowards, as history shows us. Hindus did not go out to conquer the foreign lands, mostly because on the North and West, the lands were not so welcoming, geographically. India itself was full of fertile lands, abundant resources and possibly unlike Deserts of Middle-East pushing men to fight and move eastwards never was a reason. A long, conspiratorial, mild-conditioning has led us to believe that when the Islamic invaders raided India, India stood like scared deer in a corner. It ignores the fact that the march for global rule of Alexander was stopped in India only. Reasons have been given that the Army was about to rebel as they were feeling homesick, but they are mostly part of writings of historians on Alexander's side. One ignores that the soldiers might have been feeling homesick much earlier as well, but Alexander was winning kingdoms and had something to offer to them, to placate their frustrated longing for home.

In his book Hindu Dharma and the Culture Wars, it is well-argued by Koenraad Elst in his essay Hindu Fearlessness through Ages. He begins quoting a provocative statement by Mahatma Gandhi, which he made in 1924 in Young India. Gandhi wrote-

"The Muslim is a bully. The Hindu a coward."

Koenraad so beautifully contests this rather absurd claim. This idea of fake cowardice builds on itself, as you shrink, ceding space after space, until the time it slowly penetrates your veins and in real life, start being apologetic about your thoughts and opinion. The problem with this kind of forced humility is that it is not honest and it surfaces in extreme positions. It is therefore very pertinent that the truth be told to our coming generation so that they gain the lost pride in our history. Koenraad than explains how all the bravery of Pakistan's Islamic Army went in thin air the moment India's largely Hindu army descended in Bangladesh. He also goes back into the history, to explain what is taught to us as a sudden flood of invaders and immediate falling on the knees of the Hindus of India is so erroneous. He goes back to the first attack on India in 646 AD right after Islam was born and the failure of it.

We look at the history of Islamic invasion of India. Chachnama mentions that three simultaneous attacks were made at Thane, Bharuch and Debal respectively by the Governor of Oman, and he ended up losing his brother in Debal. The first major battle between Hindu and Islamic forces happened in 644 as Battle of Rasil, in which Hindu Rai King Rai Rasil had to cede space and go back to Indus. Both the armies retreated and it seems more like a raid. Another Hindu tribe of the area, Zunbils were defeated in 653. In 698 another Islamic Army clashed with the Zunbis (Sun worshipers) and was defeated. In 700AD an army led by Ibn-Al ash' ath attempted conquer the Zunbis but failed. During the time of Umayyad rule under Muawiyah, the expansions were again pushed. King Chach of Sindh sent his army and the Islamic forces under Haris b Marrah was annihilated. By 670 AD, the Islamic armies were completely pushed back into Arab lands. The Shah of Iran sent Muhammad Bin Qasim in 710 AD and Raja Dahir lost this battle. However, the city of Brahmanabad (Masur) was quickly recaptured and Jai Singh, the son of Raja Dahir became the King. The next wave of Arab invaders in 725AD was repelled by Gurjara king, Silkula and finally defeated by Bappa Raval and Nagabhatta I, near Ujjain. Mahmud Ghazni defeated Jaipala in 1031 and conquered Punjab for good. The conquest of whole of India remained a far dream, 400 Years after the Islamic expansion started with the Prophet, who doubled as Military General and the Emperor too. To bring home the contrast, in 12 years rule of Caliph Utthman Ibn Affan, Armenia, Cyprus and Iran fell; between passing away of Prophet Mohammad, in 632 AD and 642 AD, in 10 years, Syria, Egypt and Mesopotamia fell and Spain fell in 70 years.  The Mughals at the height of their power only ruled mostly over northern part of India and even within that, a large part through independent rulers as their vassals.

When Aurangzeb decided to go back to the role of Islamic crusader, Shivaji had become a force to reckon with in southern India. Such was the valor of Shivaji that once again the pushback of Hindu India will go up to the banks of Attock. While reading Jadunath Sarcar's Shivaji and His Times, it becomes amply clear that why Shivaji was largely left as a caricature of grandness or reduced to a footnote. The instance of Afzal Khan- Shivaji encounter is particularly telling. When starting for the campaign, Afzal Khan boasted that he will capture Shivaji. With 10000 Soldiers and horses, he reaches Wai and halts there for months. He tries to get help from local Marathas and even gets it from Khandoji Khopde and Kanhoji Jedhe. He then sends Krishnaji Bhaskar to Shivaji with a conciliatory note assuring to use his influence to confirm Konkan and other forts to Shivaji.

Krishnaji Bhaskar hints about the betrayal that Afzal Khan planned for him. Gopinath Pant escorts Krishnaji back to Afzal Khan's court. Meeting was set up below the fort of Pratapgarh. Shivaji, brave and unmoved by the definite danger, dresses up for the great moment. Under his tunic, he puts on an armour, below the turban places a steel cap. In his left hand is concealed a set of Steel Claws (Baghnakha), under his right sleeve, a thin, sharp dagger- the Scorpion (Bichhuwa). He is accompanied by Jiv Mahala and Shambhuji Kavji, each carrying two swords and a shield. Afzalkhan still scared of Shivaji starts with escort of a thousand musketeers from his camp at Village Par. Gopinath Pant objects to it, saying this will scare Shivaji and the deal will be off. So he leaves the troop a little distance and goes with two soldiers, and a famous swordsman Sayyid Banda. Shivaji demands that Sayyid Banda be moved from the tent. Shiva mounts the platform and bows to Afzal. Afzal embraces Shiva and tries to choke him, at the same time he draws his long straight-bladed dagger and struck at the side of Shiva. The hidden armor saves Shiva. Shiva quickly recovers, presses his left arm around Khan's waist and tears open his bowels with steel claws. Then he drives Bichhuwa in the side of the Khan. Khan falls calling for help. Sayyid Banda tries to intercept Shivaji. Shivaji takes a rapier from from Jiv Mahala and fights back. Jiv Mahala cuts the right arm of Banda and kills him. Bearers try to take away Afzal Khan in the Palki, Shambhuji Kavji, cuts the head of Afzal Khan. The details are gory and violent. But this was the moment which turned the history and paved the way for Shivaji to become Hindu Hriday Samrat, or the Chhatrapati King of Hindus, a rebel against the sword of Islam held by Aurangzeb. The narrative of Ahimsa Parmo Dharma is thrown at Hindus always, while hiding away the massage of Gita. Shivaji's story is that of bravery and grit, or practicality and valor. It is a story we all Indians should know. It is important for both Hindus and Muslims to read it. It removes the stupid stereotypes created by the leftists to push their agenda of communal division.

If we look at later days too, Ram Prasad Bismil or Azaad, there was never a lack of courage. There was of course, a principled courage. It might sound revivalist from the perspective of modern thought which has taken it upon itself to keep the hindus perpetually afraid, timid and apologetic. But it is very important that this fake narrative is opposed since friendship is possible only among the equals. A principled Arya Samaji Bismil needs a proud Muslim Ashfaq to respect him and an Ashfaq would not become a trusted comrade to a man lesser than Bismil. Once that happens, the ghettos, the no-go zones will go away. As they say, for two men to have integrated relationship, it is important that one of the two men is not cut to his knees. And in that only a secure and prosperous India can live. Only in acknowledging and accepting individual identity can we decide to consciously merge it into the larger super-communal identity of Nationalism.