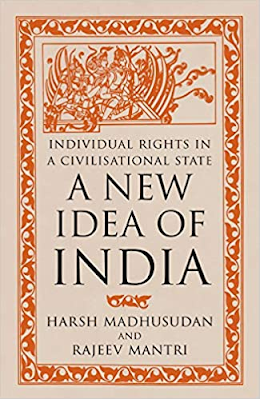 Before I get down to reviewing this book- A New Idea of India- by Hash Madhusudan and Rajeev Mantri, I must confess that I stopped reading intellectual books claiming to have the recipe of success for the individual, the society, the nation and the world at large, long time back. The intellectuals intimidate me, their theories bore me. Most of the thinkers appear to me like mercenaries waiting and watching the successful trend to adopt them. They will pick already successful cases, build a theory around them and then trot it around as if they were themselves responsible for those successes. That said, I picked this book with a sense of old intimidation. A serious book on contemporary politics, society and economics with recommendatory and laudatory notes from almost ten leading intellectuals from both sides of ideological divide with a hard cover- the book came to me courtesy Indic Academy.

It is a general refrain that one should not judge a book by its cover. Now, here is one book which one can safely judge from the cover. The cover is beautifully designed with the backdrop of original copy of Indian Constitution, adorned with the paintings based on Hindu mythology. Those who pretended to be defended the Constitution a few months back while resolving to wipe out the traditional symbols of Hindu Dharma would not believe the original constitution to carry pictures from Ramayana and Mahabharata. The Constitution of India represents the time when India, that is Bharat, bruised, battered and fractured into pieces by the fanatics. This was a time when a parliament balanced between the left and the right, within and without the party in power, Congress. To counter the leftist leanings of Nehru, we had a strong force of Patel and the balance resulted in a Constitution. However, with the demise of Sardar Patel, Rajendra Prasad- the Right in the ruling dispensation lost its mooring. As the Congress devolved into an often despotic dynasty over the next half century, the Right was relegated to a corner as the Nehruvian idea overwhelmed the entire nation from Intellectual discourse to economic direction to judicial and political positioning. It is this idea which left-leaning intellectuals called 'The Idea of India' which they felt suddenly came under danger as the masses annoyed with dishonest rhetoric and widespread corruption voted the supposedly right wing, BJP under Narendra Modi came into power.

This tendency to fix a wide and diverse nation as India under the singular idea of Nehru's socialism, minority appeasement and majority shaming is what has frustrated the nation which spend decades standing in queues to get something as basic as a Two-Wheeler or a phone connectivity. The leftist intellectual elite which has comfortably ensconced itself in an ecosystem built over the years still is neither able to understand the political change in 2014 nor is able to tolerate it. They had painstakingly built a gargantuan statue of Nehru, overshadowing not only any diverse political opinion (represented the reality of Nehru as a politician, quickly ensuring that after the demise of Sardar Patel, every dissenting voice from Acharya Kriplani to KM Munshi was shown the door), rather the nation itself. India, which had prided itself historically as a custodian of cultural and ideological diversity was quickly reduced into what Sanjeev Sanyal mentions in the foreword as various shades of Left- the Nehruvian left, the Marxist left, the Lohiaist Left, the Lodhi Road Left and so on. Nehru's idea of an embarrassed and accidental Hinduism, built around Godse pushed the Majority community of India to a corner, to keep its head down in an eternal shame of assassination of Mahatma Gandhi, and work without ever speaking out, without ever being noticed. Having eliminated any competing voices, the elite intellectuals painted the Nehru's socialist-secularist idea as the singular concept which authoritatively defined India as 'the' idea of India. It is out of the frustration from this fanatic control over narrative that this book has emerged. This reminds me of Nietzsche's famous quote-

"You have your way. I have my way. As for the right way, the correct way, and the only way, it does not exist."

Such complete was the control of Nehruvian narrative on intellectual landscape of India that, in this book authors point out, that even the failure of Nehru's economic policies were blamed on the ancient Hindu culture when Economist Raj Krishna termed snail-paced growth of Indian economy as Hindu Rate of Growth and not a Nehru rate of growth. The book raises many such critical points analyzed in the course of study which we often tend to overlook because we have thus been conditioned by the media which has been taking side with the political force which till 2014 was considered as inevitable and because the public memory is short. The noise of narratives often cloud our understanding of things pushed to the populace innocently by the intellectually. There is huge noise since 2014 about a conspiracy to convert India into a Hindu Rashtra as if it is against the idea of a multi-faith society. The authors here begins with Savarkar's idea of a Hindu Rashtra in which every citizen would enjoy same rights and will be governed by identical laws irrespective of his or her caste, creed or religion. Taking from the definition of Dharma as a mode of life or Code of Conduct, the writer contends that India being a Hindu Rashtra can never become a theocratic state quoting BJP Patriarch Shri LK Advani who said that a Hindu Rashtra and a Secular State are virtually synonymous.

Unlike the narrative created by the vested intellectual interests claiming that India as a nation was formed only after 1947 (actually a claim contested by Nehru himself), the writers quote Ernest Renan where he wrote-

"The nation, like the individual, is the outcome of a long past of efforts, sacrifices and devotions."

Such a definition goes against the intellectual tribe which claimed India as a nation to be an entity entirely formed by Nehru and therefore ought to remain forever in debt with Nehru and his brand of politics and by implication to remain eternally obligated to these intellectuals. In spite of all evidences to the contrary, why these intellectuals are hell-bent at erasing the history of India is also well explained with Tom Sowell's quote taken from his essay "Intellectual and the Society" –

This explains the relative silence with which the sins of communal crimes of the past governments have been whitewashed. How many even remember Indira Gandhi's statement on Nellie Massacre wherein when questioned about the delay in calling in the Central Forces (Assam was under President's rule), famously said- "One has to let such events take their own course before stepping in." The lies have been spoken so often to us as a nation that we have started believing then to be truth. Authors painstakingly go to primary sources, substantiate their claims and back their theory with official records. Take for instance the usual attack on the Right wing by the LGBTQ activists who have been cunningly taught by the media that it is the so-called Hindutva forces which have been opposing their just liberation. It never came into common public notice that the three petitioners opposing the decriminalization of Section 377 were Apostolic Alliance of Churches, the Utkal Christian Council and Trust God Ministries. All India Muslim Personal Law Board opposed it calling it against Indian values and culture. Jamiat Ulema-e-Hind in a statement said that Homosexuality is against nature, religion and cultural values of India. It should not be allowed. In contrast RSS chief Mohan Bhagwat said in 2018,

"Everyone is a part of society. How they are, they are, accept people for what they are. Society has changed. It is important that society prepares itself so people do not feel isolated."

The leftist myth-making ability is so subtle and is supported by international forces is so strong that still editorials are written with the sole objective of making the woke population believe that the Hindutva forces stand for orthodoxy on the LGBTQ issues against the liberal Islamist and Christian mobs. Another eye-opener is the narrative built around Rajiv Gandhi as the force behind Indian Mobile revolution. In 1987, the World Bank funded the DoT and urged the government to push for cellular revolution in India. Sam Pitroda who happily took the title of Father of India's telecom revolution, undeservedly, blocked it, being overcommitted to CDOT's chosen path of fixed line. He went to the media arguing that luxury car phones were obscene in a nation where people were starving. Between 1989 and 1999, tele-density of India barely changed from 0.6 percent to 2.8 percent. However, the actual game changer, writers contend was the 1999 National Telecom Policy which resulted in 15 percent tele-density by 2010. It is also a given fact that both BSNL and AirIndia slipped into red under the stewardship of Congress and it is also a story almost never told to the people.

This book is a lonely but firm voice of the truth. It stands out for its spirit of search and speaking out what has long been stifled. Authors diligently delve into various realms, from Education (exposing the myth of minority education as hallmark of secularism- say St. Stephens offering 40% reservation for 2% of population based on their religious faith even after being funded by tax payers who a majorly from other religion), into the area of Judicial activism and even the matter of judicial appointments, economic principles and the shadowy politics of secularism (Secular state paying salaries to Muslim clerics out of taxes largely collected from competing faith). In fact the success of the book is that when you close it, it leaves you hungry for more reading. I wish the authors decide to dedicate one book to each of the sections they cover. Time has come for the lies to be called out and for the truth to be told. This book should not be recommended reading. It should be mandatory reading for those who care about the country. We must explore the truth, find the truth, know the truth and face the truth, because as Soren Kierkegaard (1813-1855) said- "There are two ways to be fooled. One is to believe what isn't true; the other is to refuse to believe what is true." We cannot allow ourselves to be fooled any longer.

The book is available for sale at Amazon.