Guest Post: How Noble Ancient Messages are Messed up by Wokeism 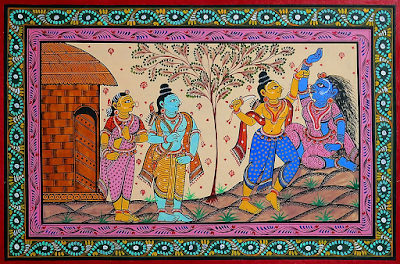 "Breaking News- Two sisters who had been target of verbal physical abuse teach the abuser lesson. The real woman empowerment which is need for an hour today. Stay tuned for the complete story on the Fighter sisters."

It is not very uncommon to stay on a channel when one comes across such a story, while switching through the channels. In itself, such a story of women being brave, emancipated and empowered is a liberating story- the kind India need to know more about! Now let's go deeper into the story.

Story is about two beautiful sisters of a traditional family who are happily married. Both sisters have been to their home town for a short vacation where the local goon eyes on them. The local goon who is habituated to attain everything he likes by hook or crook feels instant lust looking at two sisters. The Goon follows them and approaches the elder sister and proposes her for marriage. The elder sister calmly denies the proposal stating that she is happily married and she is one-man woman. The Goon then tries on the younger sister and asks her for marriage. The younger sister also denies his proposal without any fear. The goon who has already been blind in lust for them feels angry and insulted. He threatens both sisters to kill their husbands and abduct them to marry. Having run out of options, and to save the unsuspecting husband, the women fight back the goon. In the melee that ensues, the goon is injured. The goon, numb in pain runs around for his life and the sisters gets to escape.

What a perfect example of courage and presence of mind! We need more brave women like these sisters. The harassers-molesters must be taught lesson so that they won't target anyone ahead. Noble fight, great warriors and upholder of Marital vows and sanctity of relationship. Now, replace the sisters with two brothers going through hardship and the goon with a lustful, powerful woman, used to getting things her way.

'Ravan was a great brother who didn’t hesitate to fight with Lord Ram to take revenge for the injustice done to his sister. May god give every sister brother like Ravan!'

Under Secularism, denigration of Hindu faith has become an easy target to all kinds of attacks, sometimes in the name of Feminism and often in the name of Freedom of Expression. The inherent tolerance has encouraged dumb people to attack Hinduism with impunity and they do so every Holi and Diwali. The forward mentioned above is one of the dumb forwards floating around on the social media every year on Dussehra. Dussehra is the festival which signifies victory of Dharma and truth over Adharma and lies. We burn effigies of Ravan on this day to celebrate victory of Lord Rama.

As Hindus, get ready to go through their Nine Days long fast, praying to Women power, and praying for the victory of Righteousness and Morality, collectively termed as Dharma in Hinduism, almost on a cue, the fan bois and girls from Ravana fan club who are too much liberal, woke, ill-informed start posting- arguing greatness of Ravana claiming him as great human.

“Sita Maa came back alive due to bravery of Lord Ram but she came back pure due to high morals and divine character of Ravan. “

“Ravan was strong enough to abduct Sita Ma but he was civilised and of strong morals enough not to force himself on her.”

These are just few creepy examples of Gyan we get every year on Dussehra.

Was Ravana really a great brother? Had Laxman did injustice to Shurpankha by cutting off her nose?

Before trusting the well acclaimed narrative let's talk about facts from Ramayana.

Lord Shri Rama, Lakshaman and Sita Ma were living in the forest as a part of Fourteen years of Exile given to them.  One fine morning Ravana’s sister Shurpankha who was living in the same jungle with his other brother Khar eyes on two handsome princes and her sense of lust fires. She immediately approaches elder prince Lord Ram and introduce herself as a sister of mighty king Ravan. She proposes Rama for marriage. Lord Ram politely refuses her proposal stating the fact that he is already married and he believes in purity of marriage institution hence is loyal to his wife. Upon refusal from Lord Ram Shurpankha proposes Lakshman and asks him for marriage. Lakshman also refuses her marriage proposal stating that he too was married. Upon dual refusals Shurpankha gets angry and frustrated. She approaches Lord Rama and threatens him that she will kill Sita and once Sita is dead- Lord Rama would be able to remarry. Shurpankha quickly makes move of attack on Sita Ma. Shree Ram gets her intention and signifies Lakshman by looking at sky (indicating senses). Lakshan cuts off nose of Shurpankha to save Sita Ma. Shurpankha feels raged in anger and rushes to her brother and asks him to take revenge.

Now compare the two stories here and ask following questions to self.

Who is victim of threats/harassment/molestation- in above story?

How come injustice was done to Shurpankha?

How come Ravana had been great for taking revenge for her sister’s misconduct-harassment? Is this not similar to a Megalomaniac monarch, drunk on his power, supporting the immoral behavior of his sibling?

The point here is why always woman is considered as victim of any crime?

Whenever any crime occurs which involves men and women- women always gets advantage of sympathy card regardless truth.

From the Satyug till today Men have been proving their truth and dharma yet been called out and labelled for troubling/mistreating women illogically.

From Shurpankha to Rohtak sisters- Women even after being wrong and involved in crime gets to play victim card for years.

Let's be alert and well read. Let’s identify truth before issuing any judgement or certificate.

Let's understand-It's not cool to glorify what is wrong-who is wrong!

Inherent in the demand of equal rights for women is right of men to be treated fairly. Men and women are not isolated islands. Justice cannot lean to one side or other. The Story of Soorpanakha is not that of a woman wronged. It is the story of a wife being protected from a woman drunk on her power, the story of a powerful King manipulated by his Sister into taking a revenge by abducting a woman.

[This guest post is written by Ms. Bhumika Keyur Shah, an empowered woman, a professor in Engineering College from Gujarat. It takes a woman to speak about the injustice often men are made to suffer, on account of cynical display of victim-card by some women. It is due to those women that genuine concerns of women are looked at with suspicion. Bhumika tweets with the handle @BhumikaShah7 on national and women issues. ]