The Post-Truth in Indian Media- Delhi Pollution and Hindustan Times 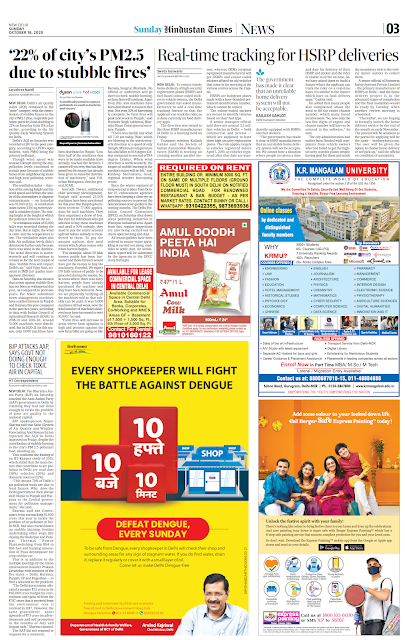 "Before mass leaders seize the power to fit realities to their lies, their propaganda is marked by its extreme contempt for facts as such, for in their opinion fact depends entirely on the power of the man who can fabricate it."
- Hannah Arendt, The Origins of Totalitarianism
As Delhi descends into the breathless chamber of smoke and dust another year, Delhi CM releases another tranche of full-page advertisements, and some would say, using them, buys the headlines of the newspapers in which those advertisements appear. The air quality hovers between bad and worse, as the silly anti-Deepavali order of Supreme Courts mock the powers-that-be, as Deepawali still is a month ahead. When I looked at the Hindustan Times today (NCR Edition, 18.10,2020), I am reminded of the above quote by Hannah Arendt.
An unscrupulous politician like Arvind Kejriwal is defined in the quote above, a politician who stood behind Tahir Hussain, a man charged with conspiring to create Delhi riots in which more than 50 lives were lost, a man who out of political compulsions refused to call in Delhi Police to clear the foreign nationals in Tablighi event throwing Delhi and much of India into the dark spiral of Covid deaths (around 6000 Deaths in Delhi alone). He is a man lacking any sense of morality and too confident of his ability to fool people. And he has succeeded riding on a compliant media and the greed of the electorate, must have emboldened him.
Today's newspaper explains the phenomenon called as post-truth. Pollution is too serious a matter and impacts the next generation. One would expect a national daily to discuss and debate on it, obviously. But look at the snapshot above and the language. When one is staring at a pollution of such proportions, from where should the discussion begin. Obviously from the bigger cause and looking at the failures in tacking it and then the steps needed to plug those gaps. Now there is a thin line between truth and lie and propaganda stands right on that line. There are two pieces of news on the same page (there is one advertisement of Kejriwal, the full-page advertisement talking about switching off the vehicles at traffic junctions is on another page). On this page alone (shared snapshot), the bolder, most prominent headline is -
22% of city's PM2.5 due to stubble burning.
There are many who actually skim through the headlines. If you are one such person, you are likely assume that the biggest cause of Delhi pollution is Stubble burning. If you are a neutral, apolitical person, you will curse the states around Delhi (UP and Haryana - BJP ruled and Punjab- Congress ruled). You will possibly sympathize with the Delhi Chief Minister too and shed a tear or two for the helpless but well-intentioned leader while coughing your way to the editorial (editorial too mildly touches the brazen and kind of proud failure of Congress ruled Government in Punjab, blackmailing the Union on the matter of life and death of NCR residents).
Let is stick to this page. What should be common journalistic wisdom and propriety?  To focus on the major cause. A report dated January 10th 2020, quoted the research done by researchers from the University of Surrey confirming that the local sources of pollution such as traffic, construction and domestic heating contribute the most to Delhi Pollution. But the Media will not talk about these cause. Earlier, the media presented Hindu festival of Deepavali and fireworks as the major culprit. They were able to manipulate the public opinion with schools asking students to take oath to avoid fireworks and eventually got the judiciary pass an order banning Diwali. Now, while the whole of North India rose to oppose the Judicial activism while trying to ban age-old tradition of Jallikattu , unfortunately, the northern Indian Hindu disgust and dejection at Diwail ban had little resonance down south, and riding on public opinion built over the years, Diwali was banned. Some may say why is firework necessary in Diwali. I say it is never about the older religious people. It is always about creating a sense of boredom and disenchantment in the younger lot towards the Hindu festivals. With fun and frolic taken out of Holi and Diwali, Hindu Indian kids will be left with Halloween to celebrate. Here is the data of pollution on account of Diwali. Here is the data from research, quoted by BBC.com 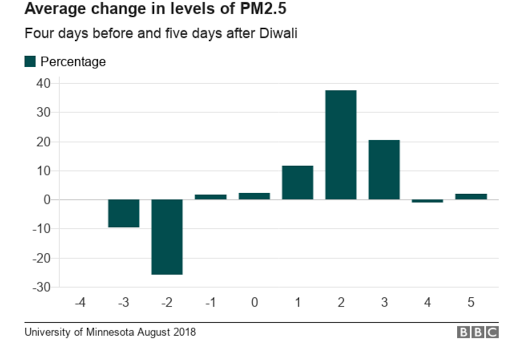 As we can see, the overall impact of Diwali fireworks on Delhi pollution, at best was fleeting. Still Diwali was attacked because they could attack it. All the power of all the animal lovers of the world could not bring out a ban on public slaughter of animals in the name of religious belief. That said, it was AAP went about asking schools to run oath ceremonies asking students to take oath to totally stop burning fireworks. The law authorities zealously went around filing FIR on those who dared to light up fireworks on Diwali as per traditions. The BJP Government lamely followed the propaganda path paved by the wokes of AAP and Congress who feel much but know little.
Now coming back to the today's report, the smaller corner of the same page has been given to the Press Conference by BJP Spokesperson, Ms. Nupur Sharma. The headline says-
"BJP attacks AAP Says Govt. not doing enough to check the toxic air in capital."
While the headline of first headline appears factual, the second headline brings forth two points:
- BJP is making a political charge
- BJP is being belligerent at the time of crisis for the citizen.
Could it have been framed in a different way (forget the prominence of positioning and font size)?
"BJP points out to the AAP Govt. failure in addressing the larger causes of pollution."
"Quoting IIT Kanpur studies, BJP corners AAP for politicizing the pollution"
"BJP brings attention to AAP government on major causes of Delhi pollution, citing IIT Kanpur study."
"BJP exposes AAP's diversionary tactics on Delhi Pollution with research data."
The fact of the matter is the chief contributor of Delhi pollution is Road dust (38%), Vehicles (20%) and domestic sources (12%) as per study conducted by IIT Kanpur. To act on these top contributor, Delhi Government under Arvind Kejriwal did not need any support from Punjab, UP or Haryana Government.

It also did not need harebrained schemes like Odd-Even scheme. All that the scheme did was a radio and print campaign which fooled people, gave Arvind Kejriwal more and more visibility, created an impression among the people that he was working for the good of people and brought little solace to the society. It was like someone climbing up and down a coconut tree and the media dancing around the tree, video-tapping the event as if it was great act of public service. In 2017, Delhi government collected Rs 787 Crores as Environment Cess and ZERO amount was spent out of it to make any effort to address the major causes of pollution in Delhi (buses, signal-free roads etc.). Shutting down the Engines at the signal halts is common sense, but it is not some Government scheme for which Arvind Government ought to spend money in full-page advertisements. What the government needs to do is to create better ways of traffic movement to reduce pollution from sources which contribute 58% (38% on account of road dust and 20% on account of Vehicular traffic).
But such is the shamelessness of this PR driven government that it goes to the courts and claim to have no money to contribute towards RRTS (which would reduce both road dust and vehicular pollution apart from the Western and Eastern Peripheral roads constructed by the Central Government with help from UP and Haryana Governments). While in neighboring Noida, UP Government under Yogi Adityanath utilized the lockdown with thin vehicular movement and higher availability of Migrant labors (pushed out of Delhi by Arvind Kejriwal Government, the same government which could not touch the foreigners in Nizamuddin) to aggressively work on the roads projects, here is where Delhi Government on notorious Ashram Signal currently stands (report dated 7th of October, 2020)(The posters thanking Arvind Kejriwal for making Ashram Signal signal-free came up last October).

Coming to the RRTS, Supreme Court Appointed -EPCA (Environment Pollution (Prevention and Control) Authority) had to suggest that the AAP Government should utilize Rs 1106 Crores it was sitting on (as on Feb 2019) watching Delhi kids and Citizens suffering under horrible pollution year after year, to meet its share of Rs. 1138 Crores from Environment Compensation Charge, after Kejriwal Government claimed it had no money to pay its share of RRTS (attacking the factors causing 58% pollution in Delhi). UP government has already made relevant allocations and given necessary approvals.
I am aghast at the shamelessness with which media protects, defends and mollycoddles Arvind Kejriwal after episode after episodes of his misgovernance and administrative failures on Pollution (even if we leave the communal disharmony and COVID in Delhi under him out of it). While Kejriwal pounces at UP, Haryana, Punjab Government, Santa clause, Tomara Dynasty and Chauhanas for Delhi woes, it is high time that UP government sends him the bill for contributing 58% pollution to unsuspecting UP and Haryana people in NCR on account of his incompetence and unwillingness to work. Why should Noida, Faridabad and Gurugram suffer for the ambitions of megalomaniac municipal commissioner with national dreams?
To handle the largest contributor to Delhi pollution, another important aspect was to create parallel Public transport systems. Apart from Delhi Metro, a very efficient system (thankfully created under the leadership of Atal Bihari Vajpayee, Madanlal Khurana and Sheila Dikshit before the Anarchist appeared on the scene), Delhi has failed miserably on this. In 1998, the Supreme Court directed the Delhi Government to increase the bus strength to 10000 (the population of Delhi has since grown and the borders too have expanded). This requirement has since been increased to 12000. Increasing the bus fleet in Delhi has been on AAP manifesto in both the elections it won. As on November 2019, this requirement was further revised to 15000 buses. The way things stand, Delhi has 5500 buses under the able leadership of IIT educated CM of Delhi. Oftentimes, one would say, what is lacking is not education, rather empathy. There is pronounced cynicism in AAP politics and that is in vulgar display in the national capital.
For Aam Aadmi Party, every tragedy is an opportunity for PR and self-promotions. They do not care about the value of human losses. By manipulating media and social media, Arvind Kejriwal, a media creation himself has turned the democracy on its head. As Jurgen Habermas wrote:
"The 'Post-Truth' democracy would no longer be a democracy"