Do not Pull Hinduism in Western Absurdities 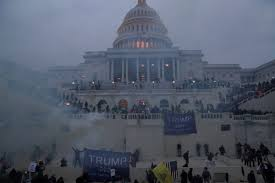 'The poets tell us, that after the giants were overthrown by the Gods, the Earth in revenge produced her last offspring which was fame. And the fable is thus interpreted: that when tumults and seditions are quieted, rumors and false reports plentifully spread through a nation.'
wrote Jonathan Swift in his famous Essay - The Art of Political Lying.
The outgoing president of the United States, Donald Trump, in all his awesomeness, lost the majority in the Congress and the Presidency of the United States of America as Joe Biden's victory was vetted by the Senate. And then as the Leftists say, with the eloquence of romantic poets- the people rose in opposition of it. Unfortunately, this time the people rose in favor the orange mop of hair which will go down in the history, if written factually, as the President of America who brought in least amount of wars on his nation and signed the most critical peace deal in the Middle East. However, History is not written factually, and is the fiefdom of those who refuse to grown of teenage infatuation of Communism, he is likely to go down in the History as the one who polarized America. If this means, wiping away or normalizing the Race divisions in the past and even full-fledged armed wars between the North and the South, so be it.
What happened in Capitol is sad and much is being blamed on Donald Trump, the outgoing American President, the most-powerful man on this Earth, now banned from Facebook and Instagram. The Technology Majors have done so to uphold the democratic principles, thereby depriving the ex-President even the opportunity of making YouTube videos and posting them for fun. Even the small venues of happiness available to undeclared President of Chief opposition party in India are not available to Trump, post his retirement. But let us not fool ourselves. Public memory is short so many have now forgotten the naked violence which had descended on the streets of America after Hillary Clinton had lost. We cannot forget the way 'Not My President' banners by the Left-leaning Democrats welcomed Trump when he walked into the White House. The events of Capitol Hills only complete the cycle that was started then in the name of democracy, liberalism and weirdly, anti-racism. That all had gone without any condemnation by the leaders who were at the losing end then. There was violence then, there is violence now. This has been a tendency of the Leftist intellectual of initiating mob violence and then acting surprised when the cycle is completed by the other side of the ideology. There is no way for me to know whether the votes were stolen or not. Unlike Senator Promila Jayapal, I am not blessed with divine vision to understand how a state not allowed to have undemocratic constitution in India merely because it was a Muslim-majority state, will kill the free speech, dissent and democracy, from another side of the Globe. How brilliant the American democratic system is or how sullen it is- is for the Americans to decide. Being a brown Indian, who has suffered around Eight Centuries of Slavery as a second-class citizen under the White Christian Supremacists, I do not have a neck long enough to poke into the affairs of a nation on the other side of the Globe. I am not writing this for that reason, nor I am writing it to get back at those who pontificated on how Indian democracy should be run as they sided with the Islamists earlier and with the separatists Sikhs now who wanted to reverse the decisions by a constitutionally elected Government. I am writing this because as is the wont of the Communist, they have used their own nonsense to attack unsuspecting Indian Hindus who had nothing to do with their mess.
HL Mencken wrote in his book, Notes on Democracy-
'The dictatorship of Proletariat, tried here and there, has turned out to be somewhat impractical. Even the most advanced liberals, observing things in being, have been moved to cough sadly behind their hands.'
Now, in the darkest caverns of their Communist hearts, they know the truth. They know that the violence they themselves had cultivated and curated for years has come home to haunt them. Therefore they have jumped quickly to blame it on Hindutva trolls back in India. This has been done one, as a part of ongoing propaganda to malign Hindutva (Unlike the Blacks who were not aboriginals in America, Hindus were and still they were deprived of any rights in administration and Governance because of their faith), and two, as a quick measure to exonerate the Christian Supremacist West.
Two pictures went around the circles in this regard. 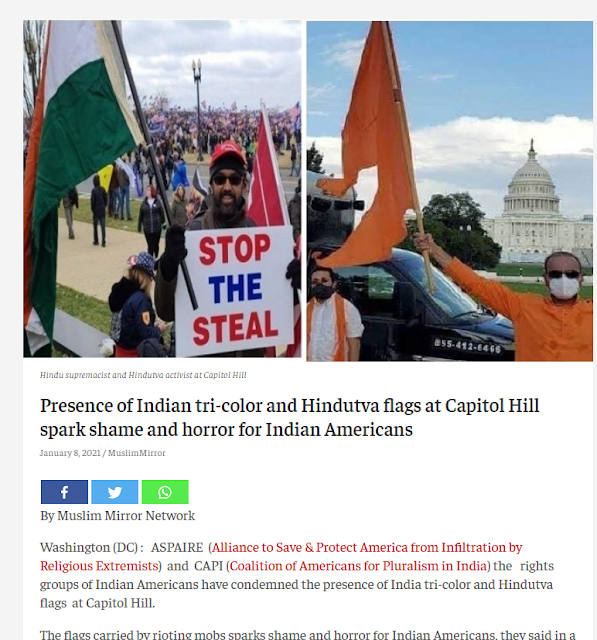 Not only Muslim Mirror, an Islamist Newspaper, run from India (well, under what WSJ and NYT calls Fascist Hindutva Government of Narendra Modi), whose clipping is mentioned, the #Reuter release was quoted by all major Newspapers. It mostly went around with the heading - Indian American Groups Condemn the attack on the Capitol. Most of them quoted a group named ASPAIRE (Alliance to Save and Protect America from Infiltration by Religious Extremists) and Coalition of Americans for Pluralism. The home page  of ASPAIRE explains the kind of Infiltration they are trying to protect America from is not the one which flies jets into American Buildings. Their concern is Islamophobia and to fit in the woke vocabulary they use the term 'Nazism (which was a combination of White Christian Supremacism and Socialism, supported by the Muslim Brotherhood) to happily attack the Jewish and the Hindus. The section named 'Main Threats' refers to RSS and Hindutva. It is strange that this does not find any takers in global terror experts world view. The amount of focus this US based organization has on India (it has Pictures of Modi, Amit Shah and well, Arnab Goswami, the Journalist who was in Prison for a week for opposing a Congress-led Government), it seems like a Sam Pitroda run Organization more than the one genuinely working to protect America. Not many details are available about who runs it however, the fake news did give few hours of international fame to an unknown, Hinduphobic, propaganda organization.

It quickly came to light that one of the Picture, with a person standing with a saffron flag in front of Capitol Hill was from a calm day, last year. It also came to light that picture of the person holding Indian Tricolor was indeed from Yesterday's violence in Capitol Hill by Trump supporter. However, it turns out that the person in the Picture, condemned widely as Hindutva terrorist is a Christian supporter of Indian National Congress, which is run by a lady of Italian Origin.
Indian media was suddenly taken aback by this nasty attack of western propaganda machinery. Indian media and the people, unlike the Communist China and Islamist Pakistan and Turkey, were not taking dig at America, but were rather concerned. Unfortunately, this attack came while intellectuals of India used the opportunity to attack Hindutva in the name of the tricolor-holding political extremist and claimed that Hindutva trolls attacked world's oldest democracy. As it turned out, they were wrong on both the counts. India had world's oldest democracy, in Vaishali in Modern Bihar. Even Rigveda has reference to the King requiring the acceptance of Sabha (the Upper House) and Samiti (the Lower House) so as to rule as a legitimate ruler. Even Rome had Democracy during its Pagan days. I am writing this because I tired of these intellectual lies. Will this stop a Shashi Tharoor from lying again? No, it will not because even when caught, by the time it is caught, it will have served its purpose. It will get shared across platforms because obviously Twitter or Facebook, living their teenage fantasy of bringing back communism will not delete the tweet or mark it. Quoting Jonathan Swift again, to explain why these fake stories and cycle of lies will continue -
"As the vilest writer has his readers, so the greatest liar hath his believers: and it often happens, that if a lie is believed only for an hour, it hath done its work, and there is no further occasion for it. Falsehood flies, and truth comes limping after it, so that when men come to be undeceived, it is too late; the jest is over and the tale hath had its effect."
PS. The man Tharoor quoted as Modi Bhakt and trolled as Hindutva guy was later found to be a Congress supporter, his brother being AAP supporter (the Party which had its MP wrestling with the Parliament staffer during recent debate) and is called Vincent Xavier . Tharoor tried to brazen this out trying to wriggle out of self-created mess without an apology by claiming not to be responsible for the act of every admirer. The same person and his colleagues have been seeking the resignation of Narendra Modi for every misdemeanor of every follower of Mr. Modi.