Book Review: The Sanghi who Never Went to a Shakha- By Rahul Roushan 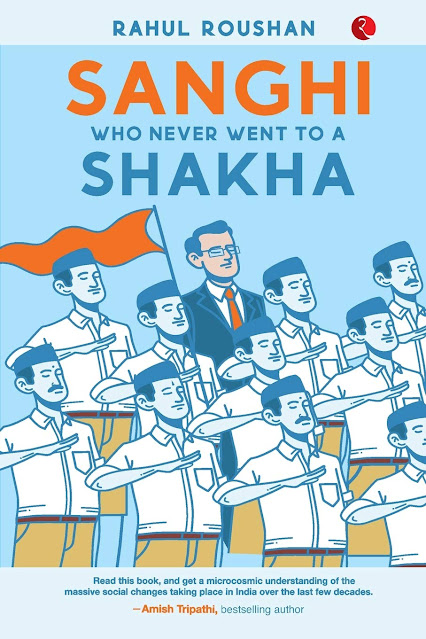 'There is a crack,

A crack in everything;

The Light gets in.'

Wrote Leonard Cohen, in his song Anthem. I have been meaning to write a review of the book by Rahul Roushan called Sanghi Who Never Went to a Shakha. I was not getting around to it, the dark shadows of deaths floating around in this resurgent wave of Corona Pandemic, where each man has been reduced to an isolated island of life in the middle of a dreadful sea of unknown. Apart from that it was the structure of the book which was confusing me. Is it a memoir? or a non-fiction tome of political history?

Sanghi - the term mentioned here refers to a member of RSS, a much-maligned Rashtriya Swayamsevak Sangh, a cultural organisation, which talks precious little but is always working in the shadows coming to the rescue of nation in the moments of all natural or man-made calamities. It is one of the largest network of patriotic individuals who are, strangely, proud of India's cultural history. The parties in opposition led by the Congress has come to hate it as they have come to hate everything Indian or Hindu. Rahul Gandhi, Congress leader from the political dynasty founded by Jawahar Lal Nehru considers Sangh as his favourite foe, much like his great grandfather who had some aristocratic indignation to any organisation or people who did not come from the same class as his. Notwithstanding the fact that RSS mourned the death of Gandhi for Thirteen days, and within a month of banning the organisation (Nehru was hasty in banning any organisation he did not like and banned Communist Party too, a story, largely kept hidden), and that Sardar Patel invited the Sangh to join the Congress and the Government in a Public Speech in Lucknow, Sangh remained a bad name and embarrassing connection in modern circles.

But that is the story for some other day. This book is not about Sangh, this book is about the Hindu mind which has been forced into an embarrassed silence by the cabal of Leftists who have kept the post-independence, in general, post-emergency, in particular, intellectual space as closely-guarded and exclusive, elitist club. Ever since the assassination of Gandhi by Godse, I would say a man who was rightly alienated by Savarkar, he has been used as a stick to beat any Indian with any hint of pride in Indian culture and Hindu faith. Those who are aware of the things, have written that the Sangh Supremo who was in Chennai at the time of assassination was physically disturbed when he got the news during an event and had to sit down to allow the impact of this news settle down saying,"What a misfortune for the country". But still, Godse has been mischeavously linked to Sangh and Sangh has been linked to all things Hindu until every Hindu head was hanging in shame and every Hindu intellectual was shunned into silence.

By the time, this story begins in outskirts of Patna, going through a socially-divisive social experiment of Laloo Prasad Yadav, Rahul Roushan is begins his life as a totally secularised Indian, much like any other middle-class Indian, as a school-kid. As the story flows through the years, Rahul feeding on the staple-diet of secularism through his childhood until his taming is complete to the extend of turning him blind to any historical wounds that the past has left on his heritage and faith. Then he moves from Bihar to Delhi, the National Capital and lands in one of the leading media Institutes in India.

This is when the cookie begins to crumble as his proximity to the media, to the News and to the craft of Newsmaking increases. He discovers the truth about his classmate in IIMC whose rants about 9/11 he had previously considered secularist rants, as he is later discovered to be media resource attached to an Islamic Terror organisation. Rahul, by then is a Journalist, with Sahara News. He tells us about the way narrative is manipulated and propaganda smuggled in the name of secularising the facts. I wished he told us more about that time. As Social Media continues to expose the high Priests and Priestesses of media, one often wonders if the so-called journalists do those things because they have thin brains or thick skins. I detailed book on Rahul's Journalistic adventure would make an interesting read. Rahul goes for MBA, founds Faking News, sells the venture to Ambanis and then founds OpIndia, an unhesitatingly and proudly Right-Wing Digital news platform.

The book is received so-well and supported by so many celebrities that it does not need my review to sell. It must be selling on its own steam merely because it reflects everyone's growing up. Every Hindu who was told to sit quietly in the corner because Godse, a Hindu killed the Mahatma, while the world went around offering wild justifications to heinous mass manslaughter across the Globe in the name of Islam, would find the story resembling their own lives so much. As the Hindu voices rise with a new sense of assertive identity, shunning the shadows to which they had been pushed, we find every silenced Hindus voice in Rahul Roushan's memoir. When in 16th Century, the African-Americans arrived in the foreign lands, they found a world of slavery awaiting them. By Sixteenth Century, Hindus of India had already lived through a couple of centuries of similar or worse slavery under the foreign rulers of a strange faith. Dinkar in his book Sanskriti Ke Chaar Adhyaya (The Four Epochs of Cultural History), has written that Hindus who had often defended the Mosques of visiting Muslim Salesmen were shocked to find a culture which think nothing wrong about desecrating Hindu places of worship. In the same book Dinkar, in a very scholarly fashion makes the point that Hindus had been secularist even before the West had discovered the word and the fact that Parsis found India a suitable refuge when they were ripped off their roots by the invading Islamists stands testimony to the tolerant Hindu spirit. While restoring the dignity of Blacks of America is high on global agenda, it is a pity that any attempt of Hindus to rise as a self-respecting race is viewed with suspicion. Every assertive stance of the Hindus is considered as a rebellion against the global religious order. They are thrown out of Oxford and humiliated in Harvard. As Rahul points out that narrative building is so strong that a Hindu casualty of religious hate  Notwithstanding the fact that in a nation of 1.3 Billion People, people need to go back couple of years to find one Tabrez Ansari (who actually died days after alleged lynching of the mob), while to find an example of violent aggression of the second-largest Majority, say for instance, the recent lynching of a Police Officer Ashwini Kumar by the Islamist mob pushed into violence by the local Mosque, one needs to only open yesterday's newspaper; the demonisation of Hindus as intolerant and regressive continues. This memoir of Rahul Roushan is a reflection of those young voices which are everyday discovering the hollowness of the class which has been telling them for decades to stay silent, obey the orders and contribute to the world which has no place for them or their dignity. This book is a record of cracks in Indian society through which Indian politics has grown. These cracks have left the soul of entire generation full of cracks. These cracks do not hold up for a photogenic picture, they are ugly reminders of a fractured past. But then we cannot continue to pretend that they do not exist. Secularism cannot remain a one-way street for ever. These cracks must be accepted, ugly as they may be, for they let the light in. Do read up.